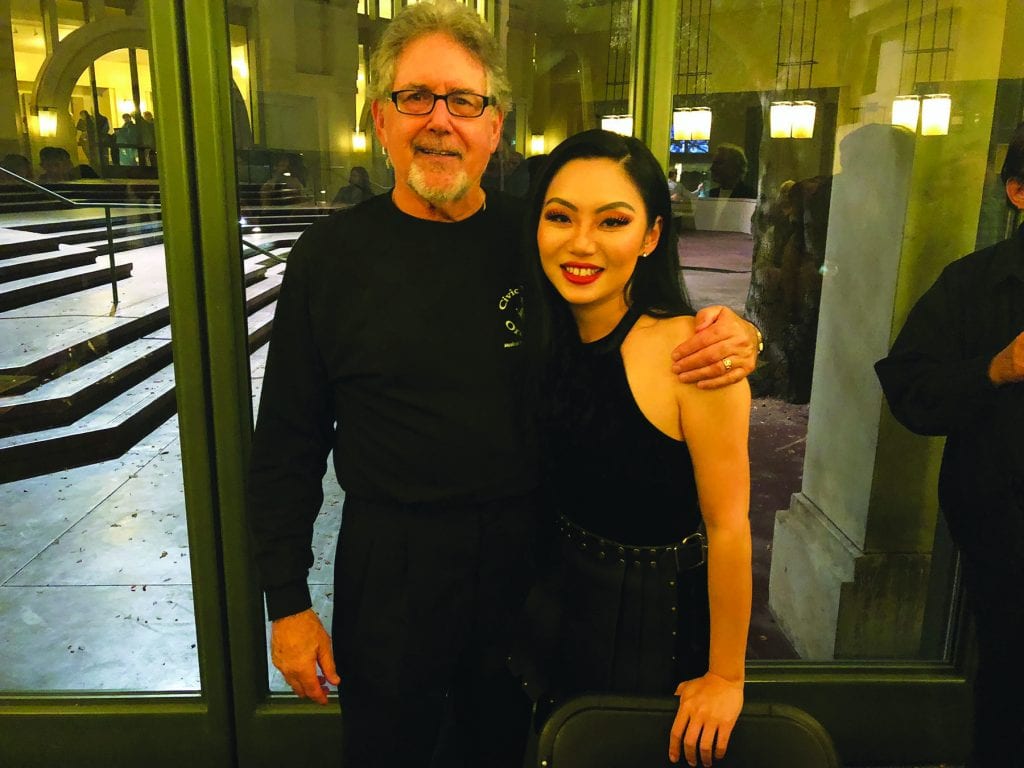 Robert Gilson and his old student Tina Guo backstage at the California Center for the Arts, Escondido Sunday night after the concert that brought the world-class Guo back for an emotion-filled reunion with the San Diego Civic Youth Orchestra where she first played when she was 11-years old.

Sunday night the California Center for the Arts, Escondido hosted the international sensation, cellist Tina Guo, whose explosive theme for “Wonder Woman” has become one of the most recognizable anthems in the movies. The prolific musician has become so well-known that if you have heard a moody cello score on a major motion picture the chances are good that Guo is the talent behind it.
The Grammy nominated virtuoso’s solos have been featured on the scores of “Wonder Woman”, “Sherlock Holmes”, “Inception”, “Iron Man 2”, “Batman vs Superman”, “Pirates of the Caribbean 5” and the Oscar nominated “Dunkirk”.
The extremely down-to-earth Guo, who was a student of Robert Gilson in the San Diego Civic Youth Orchestra, was invited to return to play with the orchestra last year, but it was a matter of logistics and timing to be able to schedule her. She has played on two tours with Hans Zimmer but has also been the soloist in Cirque Du Soleil’s Michael Jackson tribute.
Zimmer has said of her, “When she grabs the Cello, it’s like a sword. She becomes the Wonder Woman.” Her mastery was evident Sunday night as she held the audience in the palm of her hand.
Gilson gave an emotional tribute to her at the beginning of the concert, which started with Rossini’s William Tell Overture (without Guo) and then moved to the Cello Concerto No. 1 in A minor of Saint-Saéns, which was special for her and Gilson because she was the soloist two decades ago for the same work when she was a little girl who was shorter than her instrument.
Guo made the concert even more special when she moved her band onto the stage for a series of pieces taken from her album “Game On,” which, as the name suggests, is made up of music composed for video games.
At the end of this second “act” she played her arrangement of “Wonder Woman” on the erhu, a two-stringed Chinese instrument. This arrangement was somewhat souped up from the version we are familiar with from the movie, but it was, if anything, even more exciting.
Guo is an artist who has an allure that can only be described as magical, and when Zimmer compares her facility to that of a sword master, he is not far off. Her facial expressions make her entire self seem to meld with the instrument as much as her hands master it.
This was the first time that her band members, who all have very impressive resumes in their own right, had played with an symphony, which created some interesting challenges since, as Guo herself pointed out, they are used to playing about five times as loudly as your average symphony orchestra.
One of them Guitarist John Huldt, remarked on his Facebook page: “First time playing with an orchestra. Super cool stuff.”
Bass guitarist Kfir Melamed added, “It was a really cool experience to play metal with a symphony.”
The final section of the concert included Guo and her band once more accompanied by the orchestra for a rendition of the Legend of Zelda, another gorgeous work from the world of games. It makes this fan of classical and movie scores realize how much I have been missing by not spending all my time cooped up with a big screen and a video game console. Or maybe not.
After the concert one of her fans remarked, “I liked how down to earth she was. So open with her background and thankful to the youth orchestra, etc. She was obviously passionate in creating new sounds along with truly loving the classical background. Just thought she was super sweet and generous I could just feel how much she loves her career.”
Maestro Gilster tantalized the audience by saying that they are trying to bring Tina Guo back to the Center next year for another fund raiser for the Youth Symphony. One can only hope that it all works out!