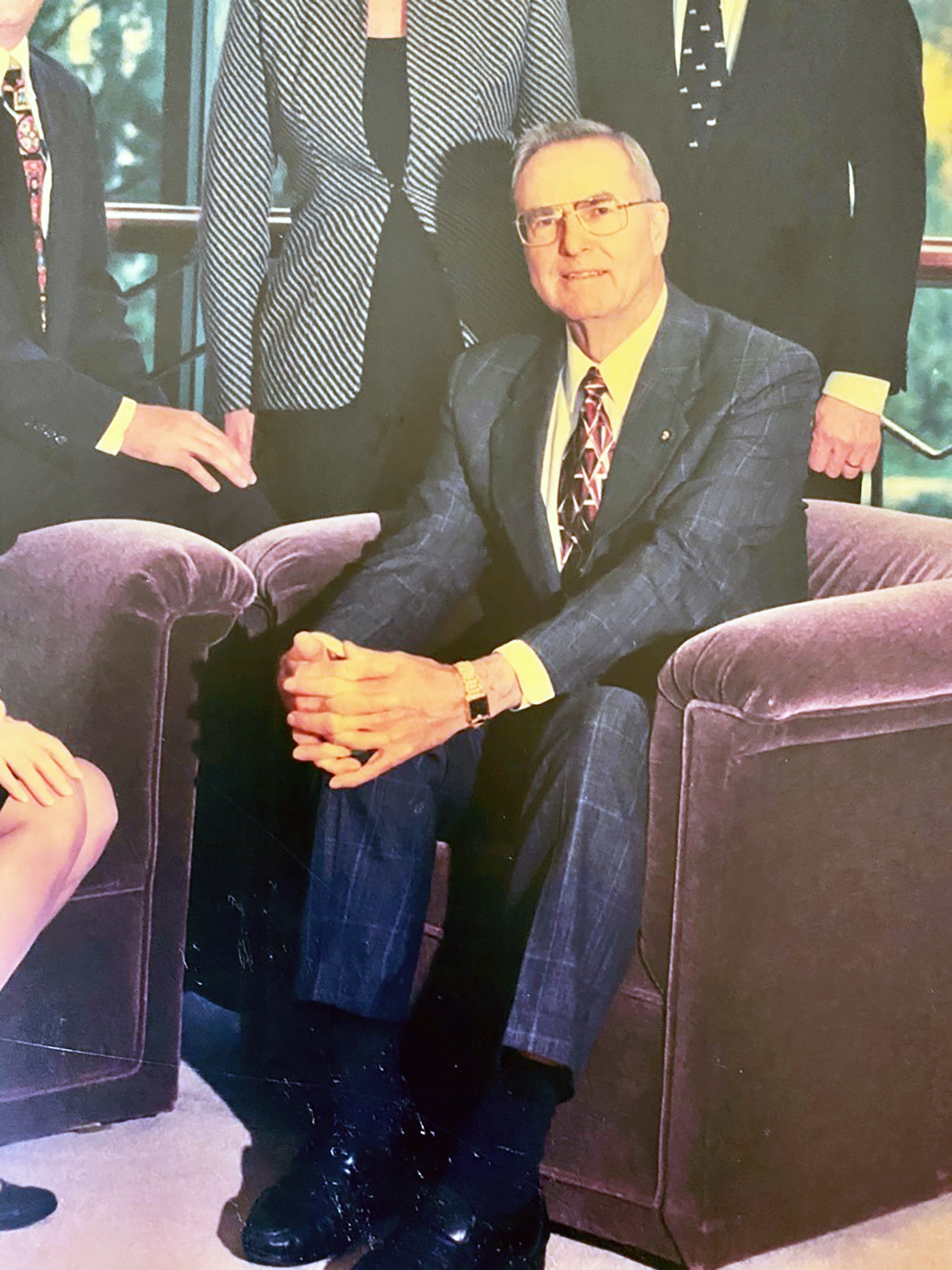 Former Mayor Sid Hollins, under whose leadership the city acquired Daley Ranch and began the process of building the California Center for the Arts, Escondido, and who was a longtime administrator with the Escondido Union School District, has died. He was 94.

Born in 1927 in rural Wyoming and from very humble beginnings, Sid Hollins spent his life in public service, first in a public education career in the Escondido Union Elementary School District as a teacher and administrator, and then as an Escondido councilman and mayor.

Hollins’s first remembrance was living in a house with dirt floors and attending school in a one room schoolhouse in Browns Hole, Wyoming. The family moved to Rock Springs, Wyoming, where Sid, his older brother and sister rode horseback two miles to elementary school. In 1941, at the age of 14, Sid and his family packed into a Model A Ford and moved to Escondido.

With a population in Escondido of 3,500, the family lived on East Valley Parkway where Hollins and his brother enjoyed rafting and fishing for crawdads on the Escondido River. At Escondido High School, Hollins was a member of the Letterman’s Club, played football and basketball. He was selected as MVP his junior year and captain his senior year in basketball.

After graduating from Escondido High School in 1946, Hollins joined the Army and spent most of his 18 months of enlistment time in the occupation of Germany after the end of WWII. When he returned home he used the GI Bill to attend Palomar College at night, which was then housed at Vista High School. After Palomar, he transferred to San Diego State and earned degrees in Business Management, Elementary School Administration and a Teaching Credential.

Starting as a teacher in the Escondido Union School District, Hollins was promoted to Principal of Felicita Elementary School and Oakhill Elementary School. He was then moved to the District Office and served as the Certificated Personnel Director, Deputy Superintendent and interim superintendent.

Hollins’s public service was not finished. After retirement he was elected to the Escondido Union Elementary school board for five years. At the completion of that term he joined the City Council for four years and was Mayor of Escondido for four years, from June 1994 to November 3, 1998.

Assemblywoman Marie Waldron, who served with Hollins on the Escondido city council, told The Times-Advocate: “I’m sorry to hear of the passing of Mayor Hollins.   Sid,  with his extensive background in education always had the young people of Escondido as a priority in his mind.  One of his main concerns was making sure the youth had opportunities and a great, safe city to live in. “

Former City Manager Jeff Epp, said, “Sid was the mayor in 1996 when I took over as the City Attorney.  He brought a lot of wisdom  to the dais with his years of working with the school district.  He was a gracious man, very kind, and always looking to do the right thing for Escondido.  City staff really enjoyed working with him because he cared so much and was so thoughtful.”

Lori Holt Pfeiler, a former mayor who also served with Hollins on the city council, commented, “Sid was a pleasure to serve with.  He cared about the children in our community, and worked to build a city they would be proud to call home.”

Jack Anderson told The Times-Advocate: “I worked with Sid both in his role as a school district administrator and a council member/mayor. In all my experience, I found his deep roots in Escondido to be a ‘principled’ foundation of his focus and actions. He was compassionate about constituent concerns, but also practical, He would listen, weigh options in his mind, and with colleagues… then, stick to his guns… So, a streak of stubbornness too. He will be missed.”

Elmer Cameron, who worked with Hollins at the school district after he joined the district as an administrator in 1968, was later encouraged by Hollins to run for city council.

“While Sid was mayor, I was mayor pro tem. He pursued adopting the city of Maebaru, Japan as Escondido’s sister city. We had to go to Japan together to do that,” said Cameron.

He added, “Sid provided the leadership with the Daley Ranch. When he was mayor he approached council members and got an agreement to seek the possibility to acquire Daley ranch and it became property of the city of Escondido. Also when he was mayor we finalized the building of California Center for the Arts, Escondido.”

Describing Hollins, Cameron said, “Both as a city council member and a school principal and deputy superintendent he was very direct, candid and honest and people appreciated his approach. He was also a pretty good tennis player.”

Royce Moore, who also worked with Hollins, believes Hollins’s most monumental achievement was the acquisition of Daley Ranch. “To me this was a monumental accomplishment by our elected officials with Sid as a driving force to secure this valuable asset for our citizens.  The recreational use and preservation of this property will, and is, a jewel for us and our future generations to enjoy.  Thank you Sid!”

Hollins, said Moore, was a long time member of  the Escondido Noon Optimist Club “and one of the best poker players in town.  When asked to play poker with him and friends I remarked that I was not a poker player, his comment, ‘no problem we’ll teach you.’   Yes! Indeed I was taught!”

Moore added,    “Sid loved to sail and was, throughout his life,  a very good tennis player.   All in all he was a dynamic, fun person to be with.   He always greeted his friends with a pleasant smile and a strong handshake.”