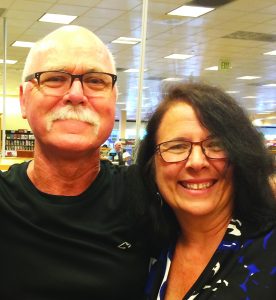 Glen D. Kirkpatrick, Jr., who served in the Escondido Police Department until cancer forced him to retire, and his wife, Debbie, have written “Overcome: A Story of Intervention, Rescue, and Redemption,” in which they share with heart-wrenching openness how their trials of long-term cancer survivorship led them to God, who intervened, rescued, and redeemed their lives.

In this combination of cancer memoir and Christian inspiration the authors mention the Escondido Police Department in several chapters. Kirkpatrick served with EPD from 1989-1993, when he retired due to cancer.

In the introduction they write: “Six years into our marriage Debbie and I received the shocking news I had Hodgkin’s lymphoma. I was 30 years old at the time. Our son Russell was only two. Thankfully, radiation therapy brought remission that same year. To celebrate the life-saving news Debbie and I took a trip to Cancun, Mexico the following February. Two years later we were shaken by the fact the lymphoma had returned. Fighting the second bout of cancer was made more difficult by my episode of life-threatening depression. This was the most challenging time of our lives up to that point.”

Guillermo Adame, Senior Minister, San Diego Church of Christ, has written:  “An incredible story of repeated crushing news and events answered with despair then courage, perseverance, fight, more despair, friendship, sacrifice, faith, hope but most of all love. Glen and Debbie will inspire you with their personal story of how they have overcome personal tragedy and adversity. Their example and honesty has helped me, and will you, by their journey as well as to encourage all of us to never give up when extremely difficult life situations hit hard. It’s raw and inspirational as well as a testament to the love of God and his people.” 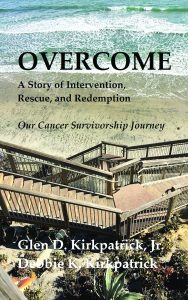 The authors say they think of “Overcome” as a small book with a big story: a story about the One who intervenes, rescues, and redeems.

“Overcome” is available through Amazon.

Glen D. Kirkpatrick, Jr., and his wife Debbie, make their home in San Diego. They have three adult sons, Terrence, Trevor, and Russell; one daughter-in-law Carmen; and one grandson named Zion.

Glen is a three-time, 29-year cancer survivor, living with the late effects of radiation and chemotherapy. He enjoys sharing what he’s learned about how to persevere in life, the importance of finding joy in each day, and the significance of living in the now – even in the moment. Glen writes about faith, family, and overcoming obstacles.

Glen’s wife, and co-survivor, Debbie K. Kirkpatrick, has worked in the animal health care profession for over 35 years. She wrote the chapter, “Devoted” for “Overcome: A Story of Intervention, Rescue, and Redemption.”