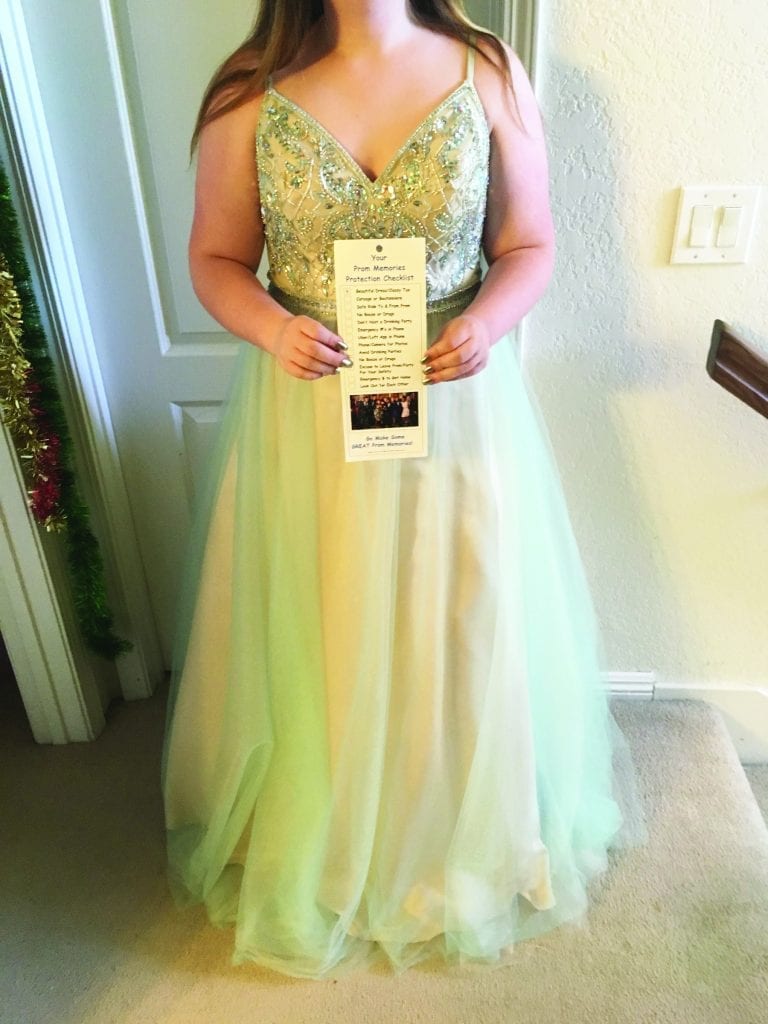 A student models a prom dress with the “Protect Your Prom Memories” tag.

A popular Escondido formal wear shop last week was promoting “Protect Your Prom Memories” by placing tags on dresses and tuxedos being rented or purchased for North County students, many of who were having proms last week.
Linda Garcia, owner of Damari’s Boutique on East Valley Parkway, partnered with Youth Advocacy Coalition members and Mental Health Systems’ North Inland Community Prevention Program to promote part host laws.
Garcia’s formal wear shop put “Protect Your Prom Memories” tags on the hangers of dresses and tuxedos that local high school students purchase or rent from the store for prom night.
The tags featured a prom preparation checklist that urges teens to familiarize themselves with social host ordinances (commonly called party host laws), to talk about the ordinances with their parents, and to avoid using alcohol or drugs on prom night.
The tags also included more traditional checklist items like, “Beautiful dress/Classy tux” and “Safe ride to & from prom” as well as phone numbers for reporting underage drinking, alcohol poisoning and other problematic situations students might encounter.
Fallbrook, San Marcos and Valley Center high schools liked the tags so much they included them with prom tickets, placing poster versions of the tags in campus restrooms, and asked the hotels hosting their proms to do the same.
Alcohol is the substance most widely abused among American youth.[1] While many parents believe their own teenage children never drink, nearly half (48.3 percent) of San Diego County 11th graders who participated in the 2013-2015 California Healthy Kids Survey reported they had used alcohol at least once.[2] Negative consequences associated with underage drinking include alcohol poisoning, risky sexual behavior, physical and sexual assault, and motor vehicle crashes.[3] The tag campaign is designed to spark a pre-prom discussion about underage drinking between teens and their parents, help them understand there is no safe setting for underage drinking and that social host laws protect everyone from the hazards common to it and remind prom-goers and adults that they should not host or provide a venue for an underage drinking party.
The North Inland Community Prevention Program is operated by Mental Health Systems and is funded in part by the County of San Diego Health and Human Services Agency, Behavioral Health Services.
Mental Health Systems is a non-profit organization dedicated to improving lives in the communities they serve through mental health and substance abuse programs that provide prevention, education, treatment, and recovery services. The agency operates more than 85 programs in 70 geographic locations in California.