This is a story about a collector of fine wines who dreamed of starting a small winery and selling his vintage wholesale, but who soon decided to open his own tasting room: in what may be the most historic winery in San Diego county.

If you hear about the new winery called “The Forgotten Barrel,” and go looking for it—using the GPS feature of your phone—you might find yourself thinking it ought to better be dubbed “The Hidden Barrel!”  However, be patient and keep in mind that it IS in a residential area that grew up around the historical site of one of the city’s oldest landmark businesses: the Ferrara Winery. A business that has become almost forgotten since it closed several years ago. Not to mention a dozen or so “forgotten barrels.” 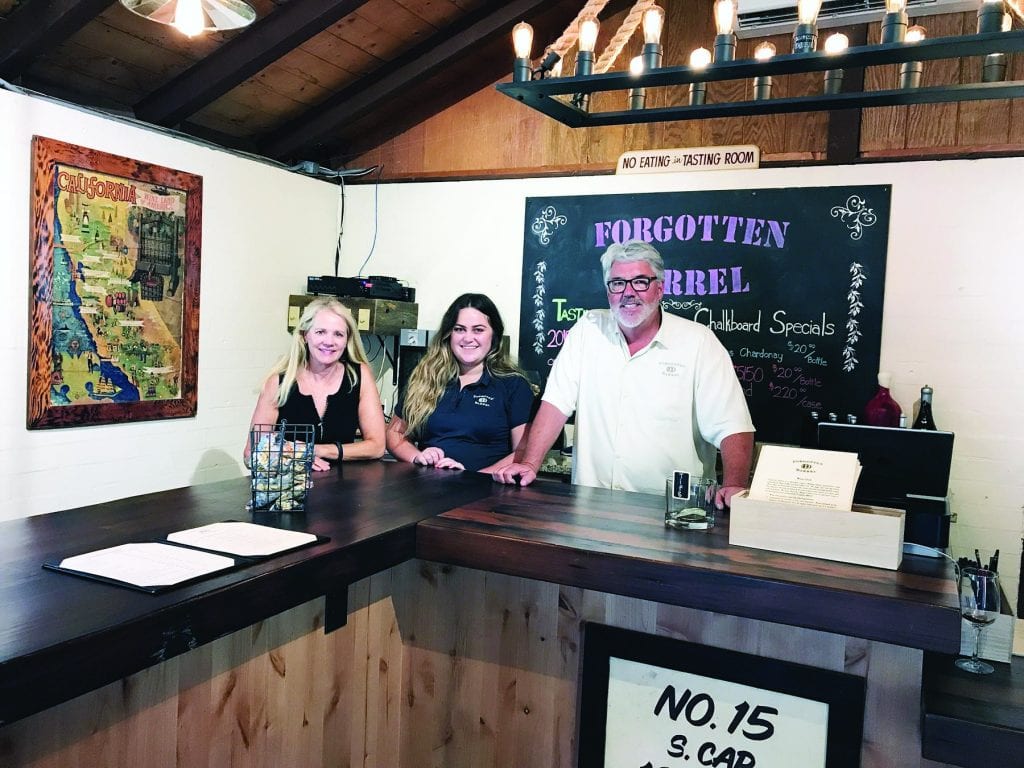 “We’ve been pretty busy,” says Forgotten Barrel proprietor Rodger Grove, who recently opened his tasting room to the new business, which is only new in the sense that the tasting room is new. Grove, a real estate investor based in Rancho Santa Fe, has been in that business for 30 years, but has only been in the wine-making business since 2010. “In 2009, I had the idea of starting a small winery and thought I would just do wholesale. It grew from there,” he recalls.

Grove became a wine “negotiant,” a merchant who purchases grape juice and finished wine from small farmers and then produces wine under his own label.

Until recently Grove obtained all of his grapes from Napa Valley and the Sonoma Valley in Northern California’s celebrated wine country.

A couple of years ago, Grove got a phone call about an old winery in Escondido, one that dated back to the 1880s, when Escondido was just starting off as a city. In the 1920s George Ferrara bought the winery with the idea that someday Prohibition would be lifted. He re-opened it in 1933, after the repeal of Prohibition.  At its peak, the Ferrara Winery was producing 35 wines. The site has been registered by the state of California as an historical site because of its impact on the history of the wine industry. 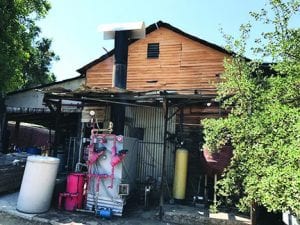 Rodger Grove plans to restore this old barn that has been on the Ferrara Winery property for many decades and turn it into his office.

Over the years vines were taken out and houses put in. The Ferrara Winery continued to produce although its vineyards shrank with time. Eventually, six years ago, it closed.

Grove has dedicated himself to restoring this, one of the oldest wineries in San Diego County, if not the state.

When he purchased the property, he inherited over 20 “forgotten” wine barrels with wine still in them. Most of the wine was unusable, although there was one special barrel of port that was very drinkable (see more on that below.) The barrels, in spite of being more than 100 years old, are all very useable.

“These are priceless old growth Sequoia redwood that you can’t get anymore,” he said. “None will be thrown away.”

Also not to be thrown away are the dozen or so huge 5,000-gallon redwood casks. The plan is to use one or two to age the new winery’s finished product.

The Ferrara property was “really rough” said Grove, and for the last year and a half they have been moving forward with the restoration to recreate, in as much as possible, the historic winery as it once was. Everything is fresh and new inside, no matter what it looks like outside. “It costs a lot of money to make things look old,” he observed. “There is a lot of history that we inherited.”

“We’re going to start producing wine from San Diego fruit in addition to what we are already producing from Napa grapes,” said Grove, when I dropped by to visit the tasting room.  When that happens the old facilities that were once used to produce wine before World War I and after the end of Prohibition will be working again. 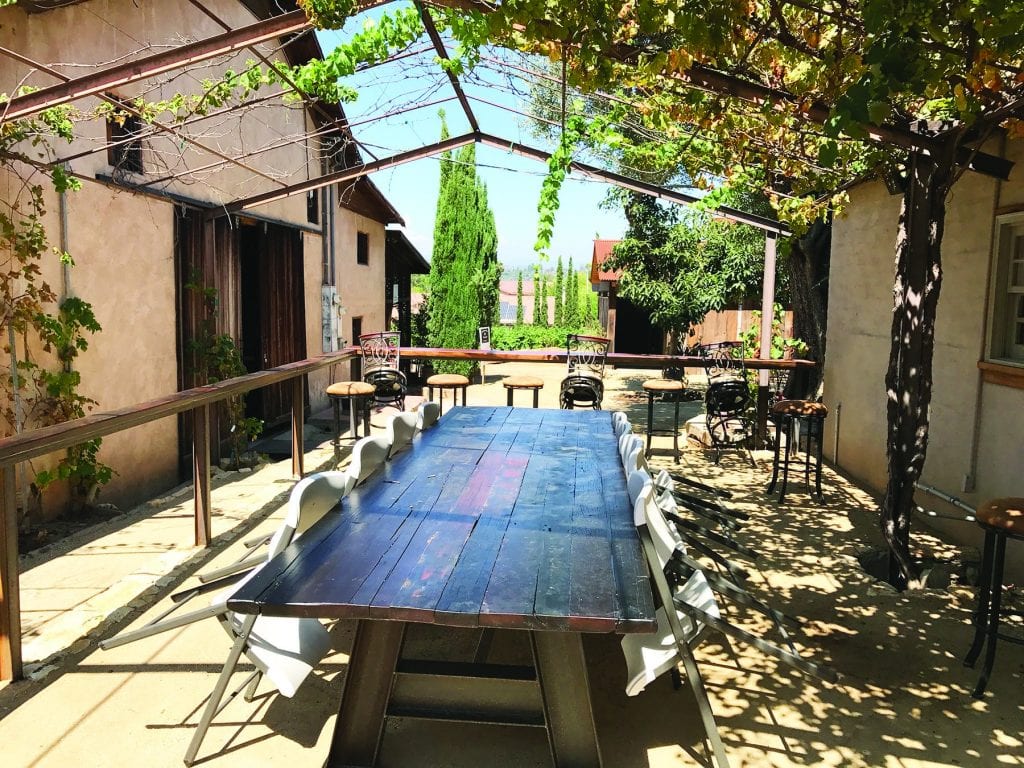 The long table was made many years ago out of old-growth Sequoia redwood, which is not harvested any more, and so is practically priceless.

“It’s important to me to produce just as good a wine here as in Napa,” he said.

He is fortunate to have a legendary master winemaker from Napa who recently moved to San Diego to help him. That man is John Robert Eppler, whom Grove met last year and during the course of conversation discovered he was moving to Oceanside  “He had never thought about making wine in San Diego,” said Grove. “We’re very lucky to have found that kind of pedigree in San Diego. It’s very exciting!”

This next season, with the grapes that will be harvested beginning in October, they will produce a new line of wines from San Diego.

The Napa wine grapes will continue to be grown in Northern California, including three Cabernets, a Chardonnay and a Pinot Noir. Northern California grapes are better for those wines, says Grove.  These will be used for whites, roses and red wine.

The grapes grown down here will be used for Rhone style wines, such as Syrah, Grenache, Mourvedra and Sangiovese grapes.  “We will make a couple of reds, a couple of whites and a rose,” he said.

The “forgotten barrel” in the name quite literally refers to a barrel of port wine that has been sitting in the old winery for years, and is still very, very good. Better than good, actually. So good that Grove is going to draw off some of it and do a limited bottling that will be called “tawny port.”

Over the years, as the Ferrara family sold off acres of Muscat of Alexandria grapes, the city of Escondido became concerned that this historical site might disappear forever. The city stepped in and put deed restrictions on the property to prevent it from ever being given over entirely to development. 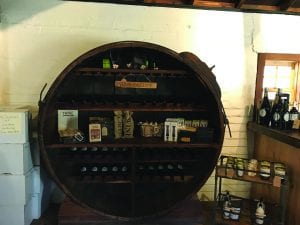 Another of the original pieces from the old Ferrara Winery.

Grove sees it as serendipity that he learned about the property when he did. “I got lucky and the city got lucky that they got a guy who didn’t want to tear everything down,” he said. “As a Southern California guy respecting the history of the site is really important to me.”

He added, “We are doing everything we can to preserve and enhance and create a place to enjoy a bottle.”

And the City of Escondido is indeed happy with what Grove is doing. Michelle Geller, the city’s Economic Development Manager, told The Times-Advocate: “We are thrilled that Rodger and his team have opened Forgotten Barrel. Not only are they adding to our growing list of local wineries, but they are also preserving an important piece of Escondido history.”

Next year, Grove plans to open the Winery to hosting weddings of parties of 100 or fewer at the restored barn that was built in the 1880s. The old bunkhouse is being repurposed as a private dining area.

The only place to buy Forgotten Barrel wines is at the winery or online. It’s not available at restaurants or in stores. “I want to sell retail here and wholesale for weddings,” he said.

Meanwhile, “business has been picking up and has been robust,” said Grove. Many of the new customers are from the neighborhood, some remember when the Ferrara Winery was operating. “They are very supportive,” he said. “We took what was kind of a blight on the neighborhood and turned it into an amenity. We get repeats almost every weekend.”

After all, who wouldn’t enjoy have a winery they could walk to and enjoy a glass or two? 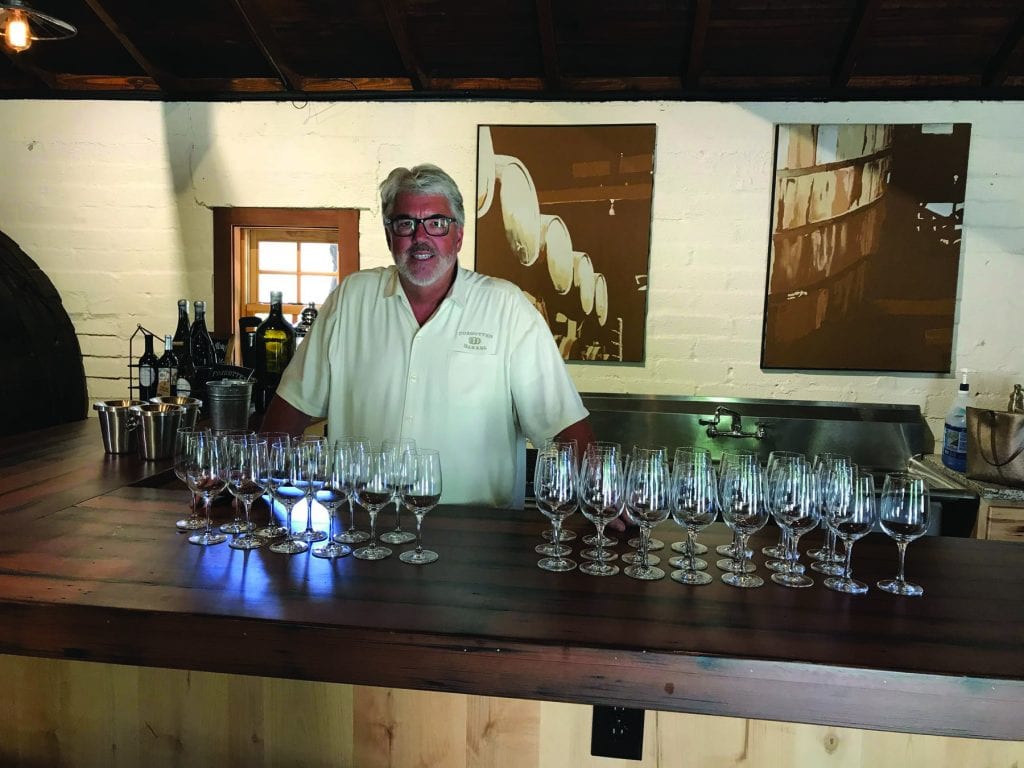 Rodger Grove behind the counter of the Forgotten Barrel Winery, which has many of the priceless redwood furnishings that it inherited from the old Ferrara Winery, where it is located.