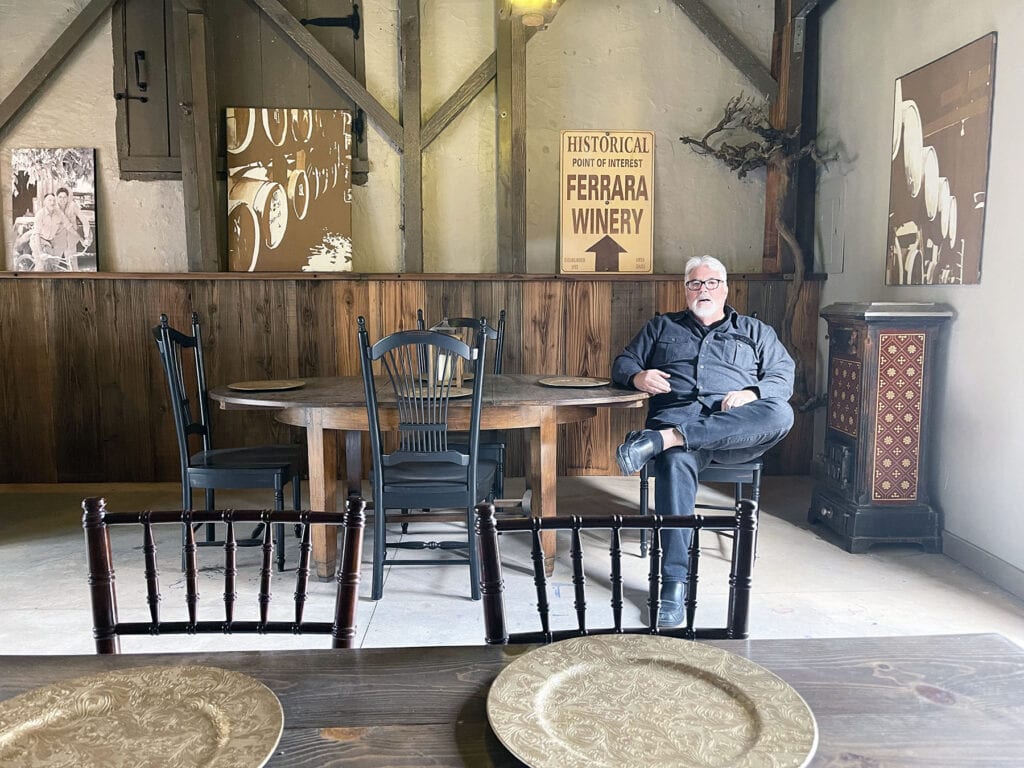 Rodger Grove recounts the history of this room, which was once the bunkhouse where Italian immigrants slept after a long day’s work and which is known as “The Hideout.”

The Forgotten Barrel Winery, the only winery located within the city limits of Escondido, has changed a lot since when it first opened in the summer of 2017. Because of the pandemic it can’t yet hold wine tastings for the public, but once the world reopens again, it will be ready!

I dropped by last week at the invitation of Rodger Grove after I expressed an interest in tasting the vintage port wine that had been stored in barrels for decades when the old Ferrara Winery was in business. That “forgotten barrel” of special port provided the name for the new establishment that, for Grove, has been as much a labor of love as it is a labor of commerce.

Interestingly, Forgotten Barrel is in the middle of a residential area that grew up around the historical site of one of the city’s oldest landmark businesses: the Ferrara Winery. A business that has become almost forgotten since it closed several years ago. Not to mention a dozen or so “forgotten barrels.”

When I arrived he gave me a tour of the facilities to show me some of the things he’s been doing to the place while on involuntary inactivity.

The oldest part of the winery he transformed into his office. “The Hideout,” which will probably become a meeting place for the Wine Club, used to be a bunkhouse for the Italian immigrants who used to labor in the fields. It also served as a cooling off place for certain shadowy figures from the East Coast, according to former owner Tony Ferrara, who told Grove stories such people staying at the winery  for a year or two when he was a youth.

In those days Ferrara had 150 acres in Escondido but farmed about 1,000 acres total. 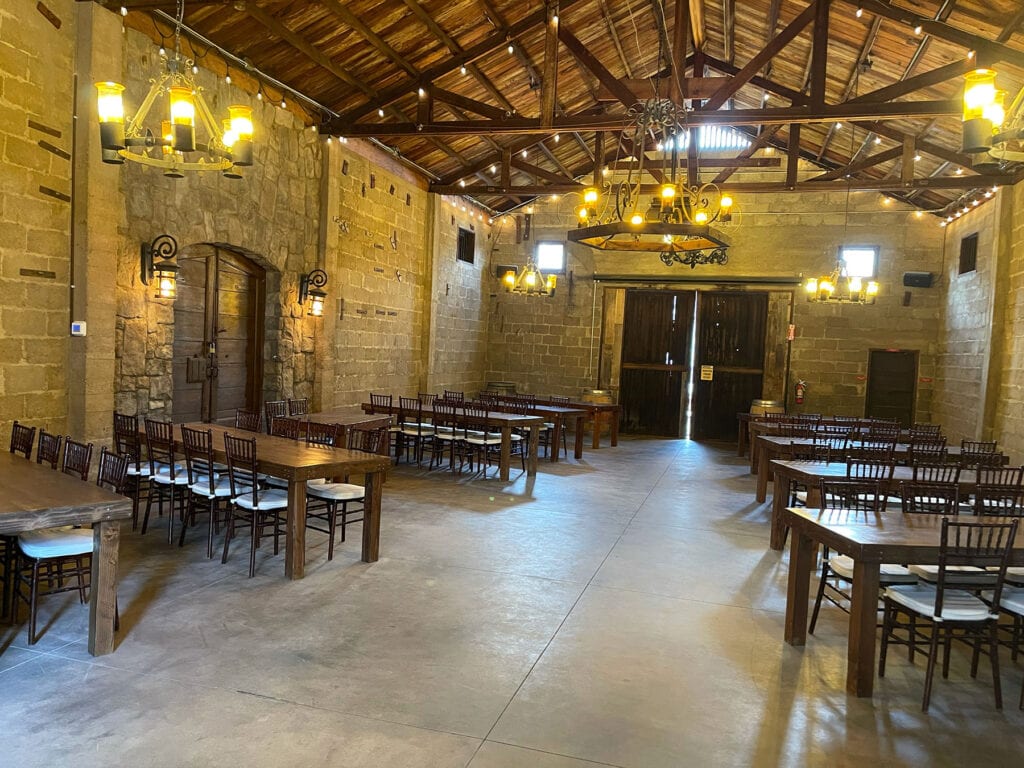 The buildings at Forgotten Barrel Winery were built by old world style craftsmen, and were made to be around for a few centuries. This chamber is intended to host Wine Club events.

Forgotten Barrel is not a big volume producer of wine like Ferrara was. It produces about 2,000 cases a year, or two to ten barrels of each wine, which qualifies it as a “boutique” winery. Most of its grapes are purchased locally, although some come from the vineyards of Santa Barbara, such as Santa Ynez and Santa Rita Hills (think of the wine country from the movie “Sideways”) as well as some from Napa and Sonoma counties.

Actually, Grove started in the wine growing avocation ten years ago in Napa, and until 2016 made all of his wines in Napa winery with some partners. That was the same year he acquired the fabled wine maker John Eppler, who had spent more than 30 years at his craft in Napa before Grove lured him to San Diego County.

Although the County has certain restrictions on where a winery can obtain grapes, those regulations don’t govern Forgotten Barrel because it is within city limits. It’s not that it doesn’t have restrictions, “they are just different restrictions,” says Grove.

Because the winery can’t yet open to the public for tastings, the only way to do it is through a reservation for a couple or a group. Go to www.forgottenbarrel.com and hit the button for “reservations, tours and tastings.” 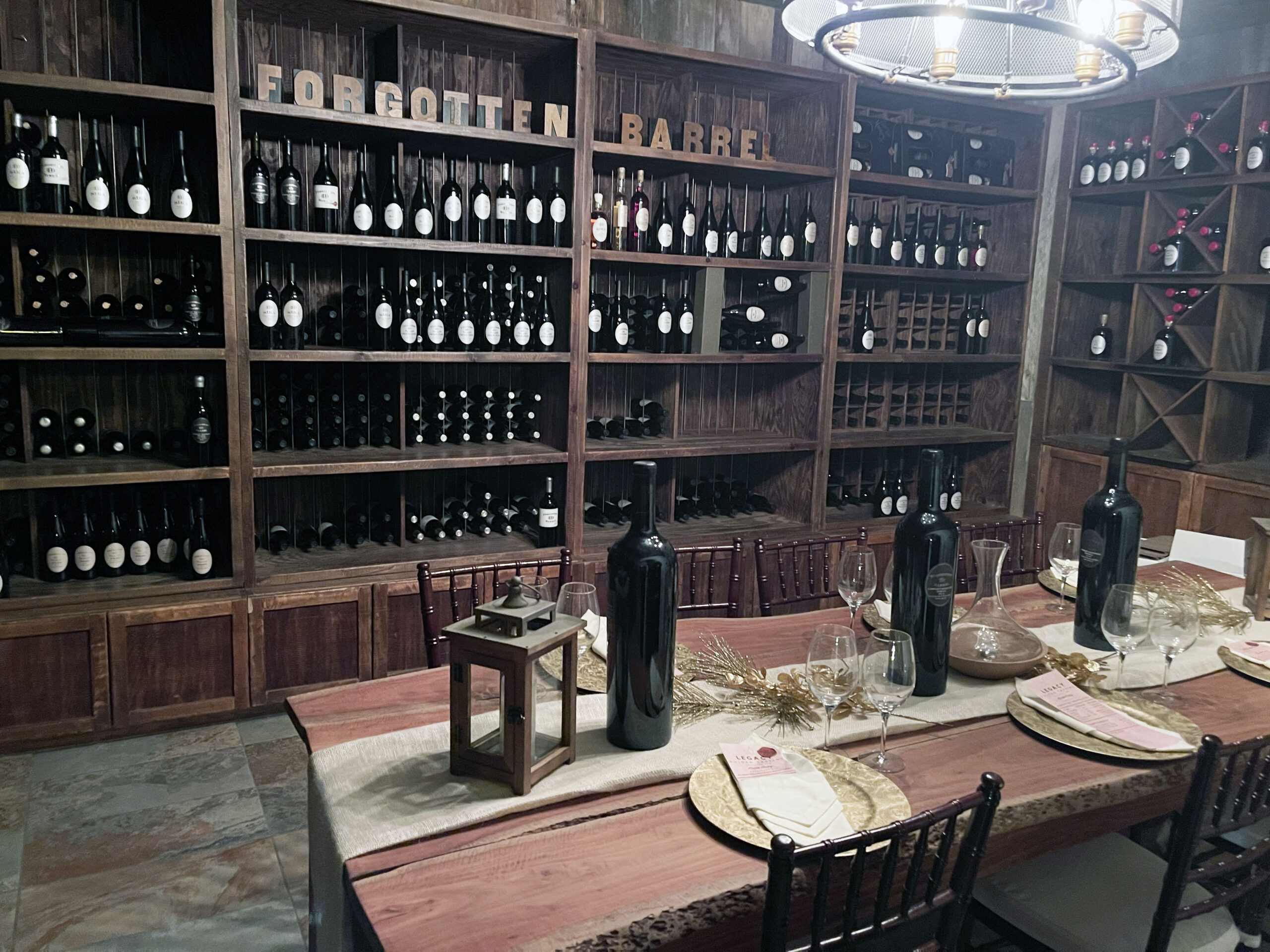 “The Library,” where the last remaining bottles of particular vintages end up to be savored on special occasions. 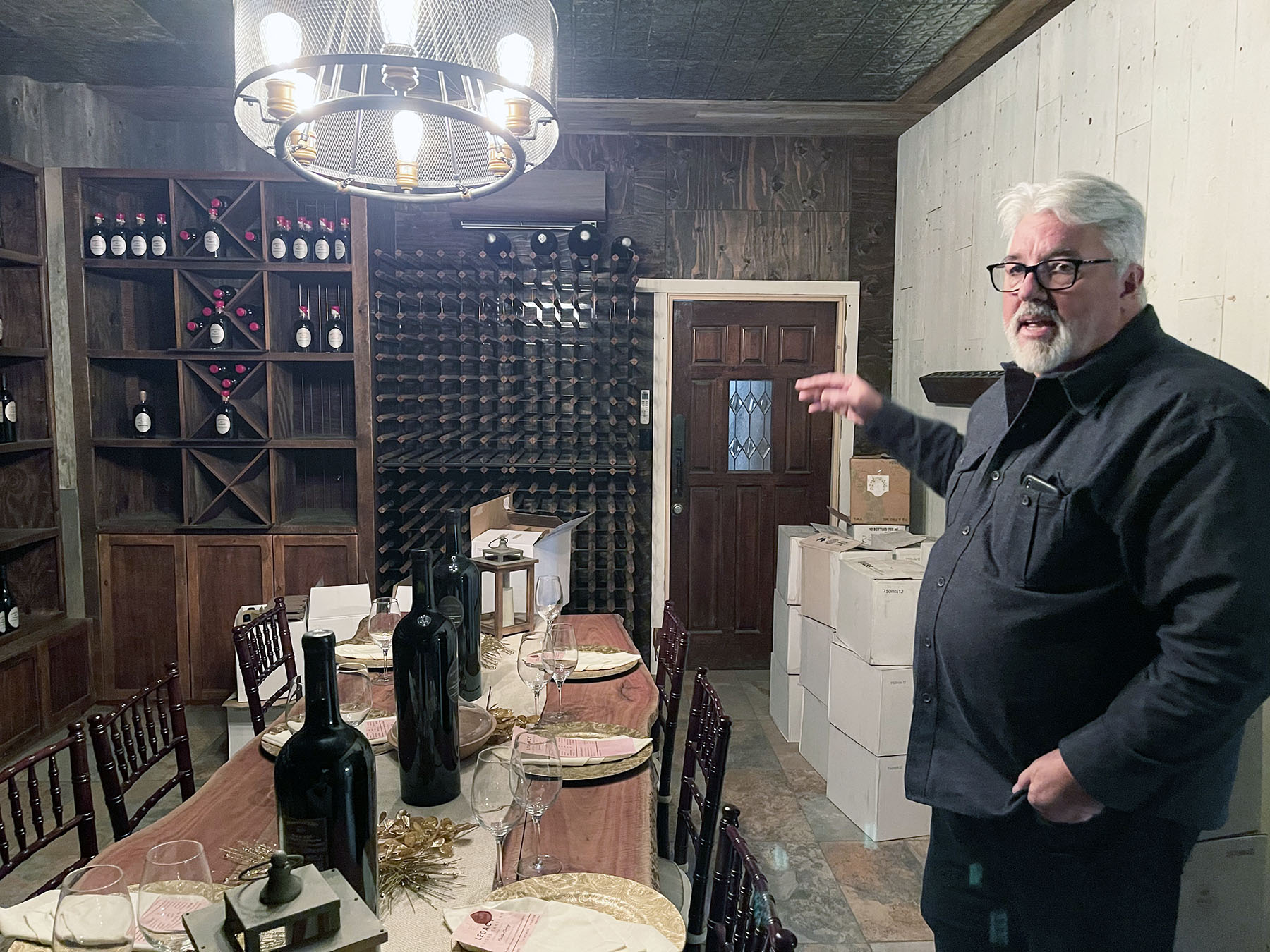 Speaking of tastings, after the tour Grove took me into the winery itself and drew off some port wine for me to try. First I tried the Papadude. It is illegal to call any wine that doesn’t come from Portugal a port, so instead vintners have to label their fortified dessert wines something else. In this case, Grove named the wine after his 3-year-old granddaughter’s name for him. It costs $36 a bottle. The wine was so remarkable that I couldn’t resist buying a bottle to take home. Maybe I’ll have some with a cigar!

I also sampled  Legacy Port, which is to the Papadude as angels are to mortals, with a it-takes-your-breath away caramel taste that lingers and expands on your tongue. I’m not ready to spend the $165 for a bottle of this ambrosia, but I could see myself getting some for a suitably grand occasion.

My thanks to Rodger Grove for showing me around and sharing with me the changes that have been made to his historic location, and for giving me a rare tasting experience.