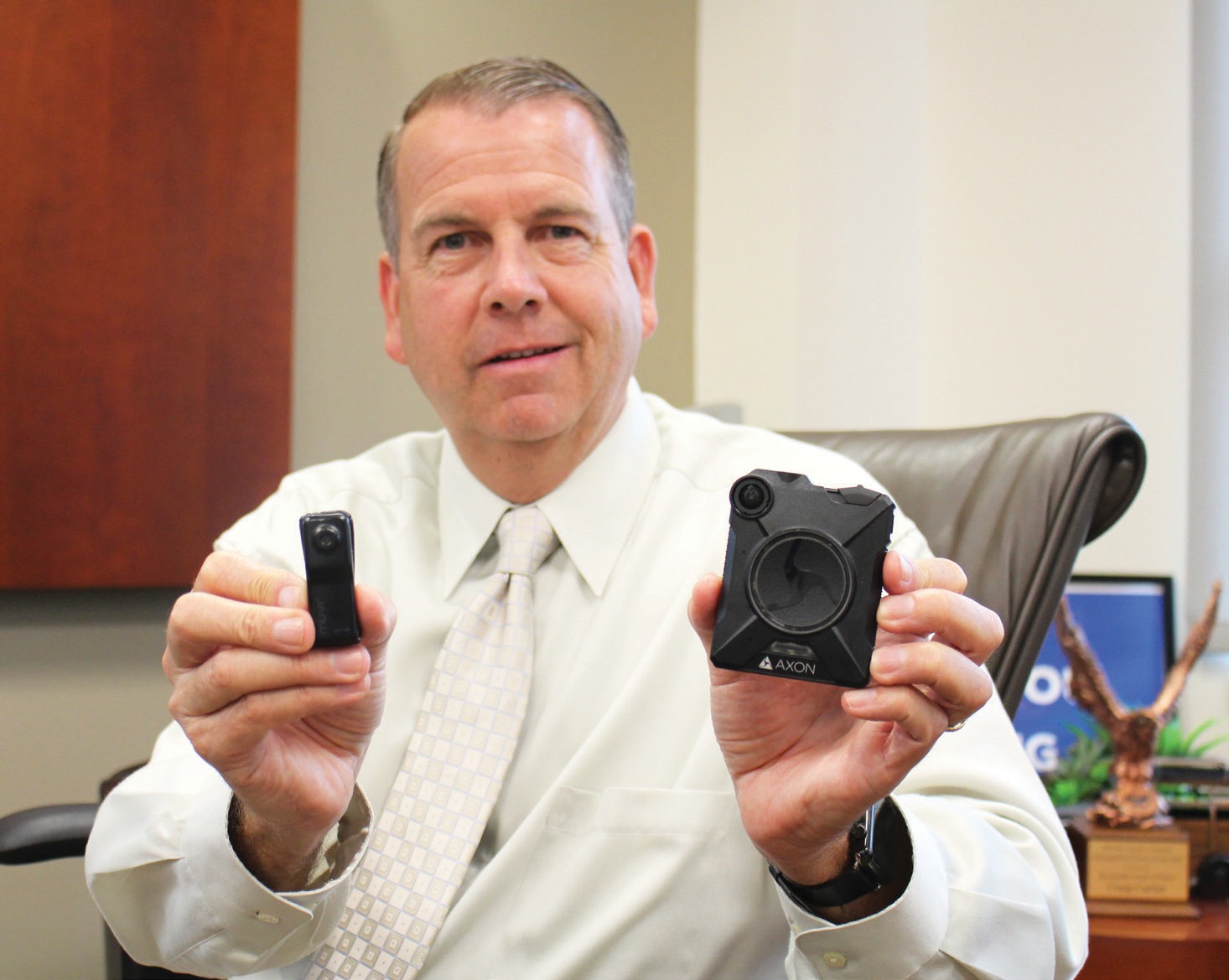 Chief Craig Carter shows the difference between the small and relatively primi­tive body cameras that officers wore as recently as four years ago and the newer, more sophisticated versions which have larger storage, higher resolution and better sound.

When parts of the rest of the country were exploding with racial fury over the killings, first of blacks in Baton Rouge and Minnesota, and then the backlash that resulted when five po­lice officers were murdered in Dallas, Texas, Escondido Police Chief Craig Carter felt the need to take action.

He called his opposite numbers, Sheriff Bill Gore and San Diego Po­lice Chief Shelley Zimmerman and the three of them suggested they meet with other leaders in the county, including city officials, and ministers at Balboa Park to promote “peace and unity.”

Carter and Gore and Zimmerman to­gether put together the unity gathering. Even though they gave the media less than a day’s notice, it was very well attended. “The turnout was great,” Carter says.

This gathering demonstrated the wel­come fact that Escondido and to a larg­er degree San Diego remains an oasis of relative racial harmony. However, such harmony takes constant work— and it can’t be taken for granted.

I dropped by the chief’s office for a visit early this week. The topic was how to maintain community harmony in a national atmosphere of tension and mistrust of police. A mistrust that seems to be largely missing in Escon­dido.

Two days after the unity event, on Wednesday, July 20, a rally in sup­port of the police, “Hug the Police,” took place out front of the Escondido PD headquarters. A man named Steve Hasty, who organized similar rallies elsewhere in the county, put it togeth­er. “The support was very positive,” says Carter.

People in the community continue to do random acts of kindness and sup­port for the police. Like the resident who delivered a case of sodas for the EPD officers, and who asked to remain anonymous.

“It’s been an outpouring of sup­port,” said the chief with satisfaction. He added, “The support of the Hispan­ic community has been outstanding.”

Chief Carter has been at his job as police chief of Escondido for nearly three years. His controversial prede­cessor, Jim Maher, had been a light­ning rod in a community that is half Hispanic, because of his policy of seeking out illegal aliens and working to arrest and deport them.

Carter’s policy is markedly differ­ent. He is interested in targeting illegal aliens who are bad actors, not illegal aliens per se. He leaves the enforce­ment of America’s immigration laws to Immigration and Customs Enforce­ment (ICE) and the Border Patrol. “I wanted to do selective enforcement,” he said. “I changed the focus to be on the bad guys and to let ICE handle the immigration part of it”

When Carter took his new position in 2013 one of the first things that he did was start to meet regularly with community groups. “We met a total of about a dozen times with different groups in the first few months. Each time I came back with something that enlightened me as well,” he said.

Learning the rest of the story

Hispanics as a group are concerned with making sure that their members are treated fairly by the police. They are the largest ethnic group in the city. Blacks are a much smaller percentage of the population. Other groups in­clude seniors and the clergy, who may be concerned with how parishioners are being treated. Whoever they are, Carter is happy to meet with them to address their concerns.

“The bad people are who we focus on, not illegals. If we arrest such people and they are illegal immigrants, then we work with ICE to remove them.”

Often people who complain that someone they knew was arrested will assume that because that person was in the country illegally and that caused the arrest. “If you have a con­cern about an arrest, call me,” says Carter. “I’ll look it up.” In the case of an arrest by ICE he might or might not be able to get the details of the arrest. “But if I can find out, I will.”

Recently a Hispanic woman con­tacted Carter to complain that a man who was stopped for running a red light was detained after it was discov­ered that he was an illegal. “I looked into the matter,” said Carter. “In that case when he was stopped for run­ning the light, they discovered that he had a warrant out for sexual assault. I can tell you that if you were to ask him why he was arrested he would tell you that it wasn’t because he ran a red light.”

When people learn the facts behind such arrests, they are often happy that such people have been removed from their neighborhood. “If someone is out stealing cars and robbing people, we want to remove that person from the community,” he says.

Carter says, “I’m going to follow the law. I’m going to go by the book. Our job is to enforce the [California] law.”

Nevertheless many in the Hispanic community remain suspicious of Es­condido police officers. “They think we are out there enforcing immigra­tion laws,” says Carter. “We are not. I have people that are equally mad at me on both sides of that issue. As the law changes, I follow the new law.”

The two policies Carter introduced that have done the most to relax ten­sions have been “selective enforce­ment” and an “open door policy,” he says. “That went a long way to reduce the controversy.”

He adds, “What we call an open door policy is the most important things I can do to maintain communi­ty relations.” What that means is that anytime a member of the community has a concern about how residents are being treated, or about a police policy, that person is welcome to come in and talk about it with the chief. “It’s im­portant to keep those lines of commu­nication open,” he said. “Or it creates bigger problems. I try to answer their concerns and the main concern is that they are being treated fairly. They are often dealing with rumors rather than facts.”

Often, says Carter, “they will have a valid concern based on minimal facts. Often I give them the rest of the story.”

Acting at the direction of the city council, all department heads in the city have put the Neighborhood Trans­formation Project (NTP) at the top of their list of priorities.

In late 2013, Carter’s department proposed a renewed approach to com­munity policing and a strategy that meshed with the city’s goals of eco­nomic development, neighborhood improvement and public safety. NTP is a proactive approach involving the police and other city departments, including Public Works, Code En­forcement, the City Attorney and City Manager’s Office to effect positive change, one neighborhood at a time.

The police look at maps and iden­tify the neighborhoods hit hardest by crime. They step up patrols, target gang members and drug dealers. At the same time the city repairs street lights, trims trees, targets businesses and asks residents to maintain their property — all with the goal of creating a more livable neighborhood.

This policy, says Carter, is transfor­mative in establishing a positive rela­tionship between police and residents.

He recalls being told by an older woman in one neighborhood, “It makes me happy to see the kids play­ing in the street again.”

He adds, “I ask my officers: ‘Would you like to live in that neighborhood?’ And if the answer is no, then fix it!”

Escondido and other police depart­ments in San Diego County were among the first in the nation to intro­duce body cameras for officers. Four years ago they started with small cam­eras, but now have advanced to larger, more sophisticated versions that have larger storage capacity. At first these cameras were not popular with offi­cers, but now most don’t want to be without them. “It’s one of the best things we have done,” says the chief.

Such advances help create trust be­tween the police and the people they are sworn to protect and serve.

“There’s no magic pill,” says Chief Carter. “You have to show a concern for your community and it’s not just one community. You have to improve things quietly for everyone and doing the right thing every day.”