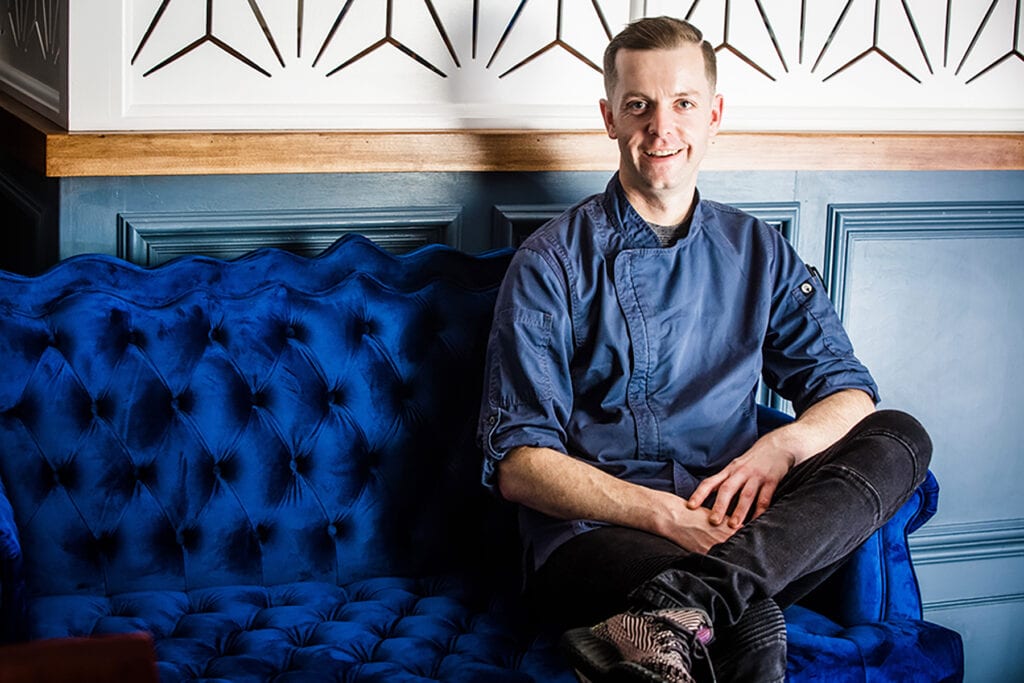 Chef Brandon Hunsaker is the cooking mastermind behind The Flying Toad. As a youngster his sibling’s nickname for him was “Toad.”

The Flying Toad restaurant is open Thursday, Friday and Saturday, from 5–10 p.m.

Ah, April in Paris! August in Escondido. While not precisely the same, there are similarities.

Among them are the joys of strolling the boulevard (all right, the avenue) taking in the sights and stopping to enjoy outdoor dining in the cool of the evening. It’s a different vibe. A vibe of sophistication and fun.

Admittedly, the nighttime open air dining experience in Escondido has been forced on Grand Avenue by the needs of social distancing. However, that doesn’t take away from the fact that necessity has created something that could be lasting and desirable once that necessity goes away.

Which brings us to The Flying Toad restaurant, known to most old-timers as Vincent’s. Since the pandemic forced us all outdoors if we want to enjoy dining, it is operating with a somewhat different menu outdoors. However, the master behind the cookery is still Chef Brandon Hunsaker, who has been cooking at the iconic restaurant since he was 15. He’s now 34.

I spoke to owner Jeannette McBrearty before it opened for business on a recent Friday. She and husband, Christopher have lived in Escondido since 2001.

“For a while after the shutdown we did orders to go, but when you pay for fine French food you pay for the experience,” she explained.

So they developed a menu that was “more pocketbook friendly.” They started off with Chef Brandon barbecuing burgers outside. The Kobe Burger remains one of the most popular items on the menu. “We couldn’t see them spending $300 on a dinner and wine out on the street,” she said. 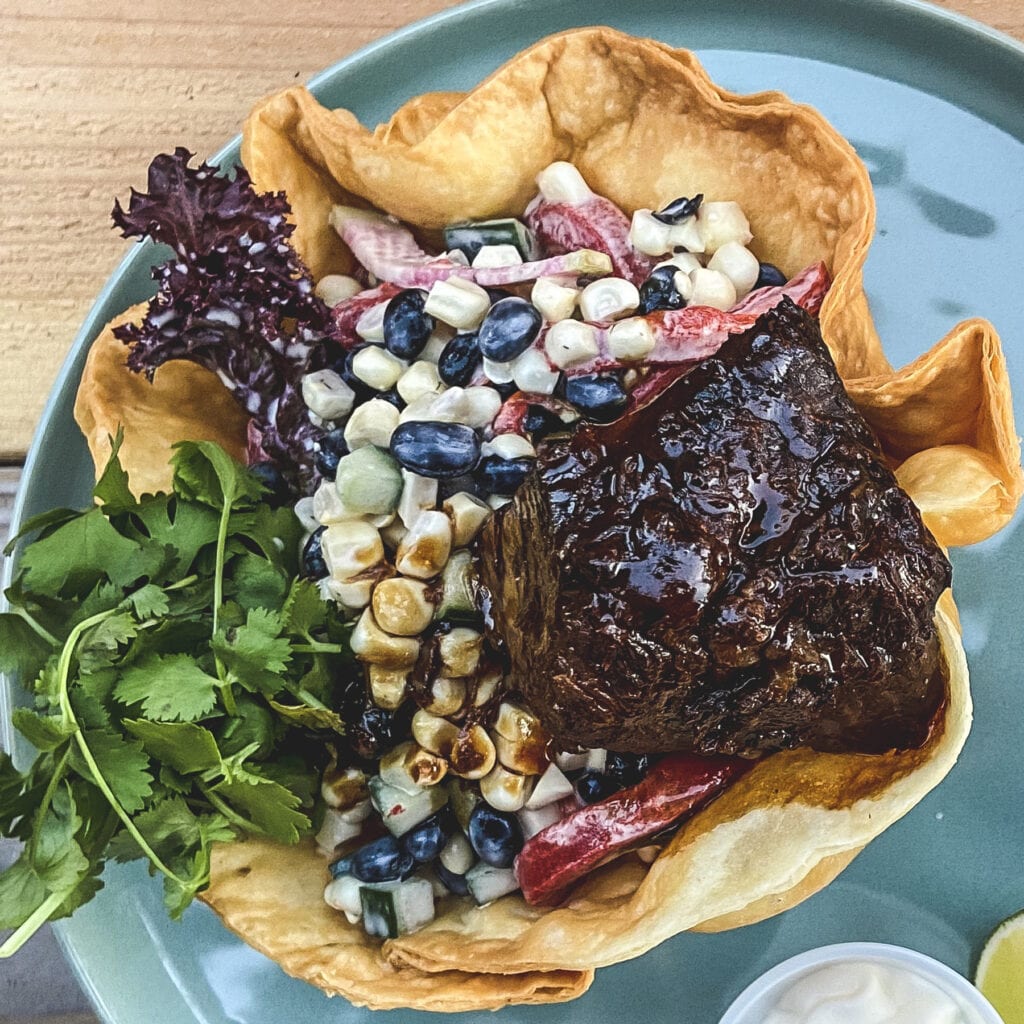 “The” most popular items are the “classiques” the Sheperd’s Pie and Chicken Pot Pie.

The outdoor menu started as a creative outlet for Chef Brandon. “He’s making food he would like to eat,” said Mrs. McBrearty. She describes his cuisine as applying the “French technique to Mexican food.”

The fresh produce used at The Flying Toad comes from the Escondido Farmers Market that happens every Tuesday afternoon on Grand Avenue. The specialties offered nightly Thursday-Saturday  depend on what’s available at the market. The menu is composed of produce from there, plus free range meats and fresh seafood. Chef Brandon makes his own pasta.

“We are the only one [on Grand Avenue] that makes our own,” said Mrs. McBrearty with a smile.  “We try to be innovative with what we serve.” They often find that their innovations appear on the menus of other restaurants. When that happens, they say, “That’s great!”

When items are listed on the menu, they can almost always be prepared gluten free or vegetarian to suit the diner’s preference.

There are several purely vegetarian favorites such as Portobello Mushroom Stack served with fried goat cheese.

During the pandemic it has been sometimes difficult to keep the supply chain unbroken. “One week you might not have something you need. It adds an extra layer of difficulty,” she said. “When you shop on Tuesday for fruits and vegetables you have to choose wisely and keep in mind issues of ripeness.”

One question that occurs when asking about a restaurant called, “The Flying Toad,” is, why that name?

They had wanted to imply French cuisine in the name, but The Flying Frog seemed ethnically insensitive. Then someone remembered that Chef Brandon had been called “Toad” when he was little. He was making wedding cakes when he was 7-years-old.

The Flying Toad was born! The chef’s nephew ended up drawing the line drawing logo that is used on the eatery’s menus.

Some restaurants have a happy hour. The Flying Toad has a happy hour every hour. So, for example, while I was dining I was offered half martinis at one cent apiece. Sometimes the drink is champagne. All are dispensed by one of the most knowledgeable mixologists I have met, Mo. I had one of her half martinis and also the very refreshing “Summertime” made with lemonade, vodka and fruit of the day.

The outdoor dining experience Mrs. McBrearty compares to “hosting a party every weekend. You want people to say, ‘That’s so much fun!’ It reminds me of an evening in Paris.” She thinks that once the COVID social distancing restrictions are lifted that the outdoor seating will be something many restaurants will want to continue doing. But most important, right now, “People feel safe outside.”

They also make an effort to make dining outside “extra special” with touches like an antique wool rug on the sidewalk and battery-powered chandeliers. “We try to make it super-inviting,” said the owner. “We are making the extra effort to welcome them.”

After interviewing Mrs. McBrearty and watching the restaurant come alive as the hour of opening arrived, I was hungry and ready to try the dishes she had been talking about. 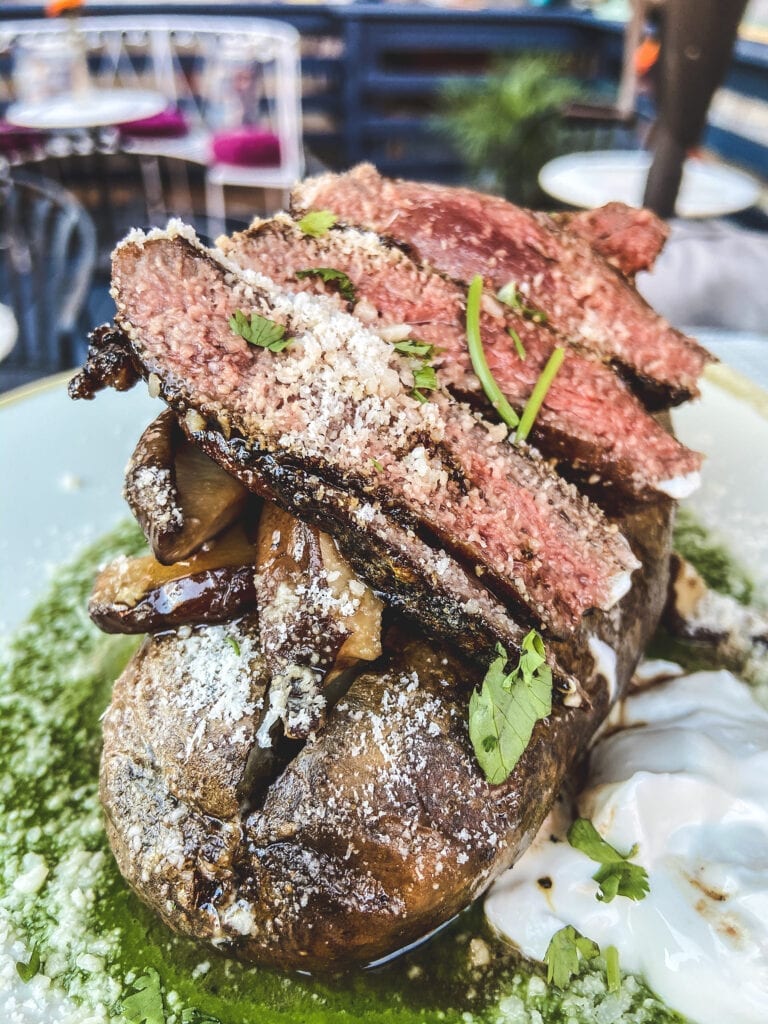 My server was Annie, who was extremely knowledgeable and able to answer all of my question.

I opened with the Crab Cake Taco Salad, made with one of Hunsaker’s Crab Cakes, rainbow beets, radish, black beans, cucumbers, cabbage and fresh vegetables in a taco shell. One thing that made the salad special was the crunchy raw corn accented with the lime chili cream and cilantro. Light but succulent!

I continued with Poblano Cheese Soup, made with cream and onion and featuring a stuffed, crispy piquillo pepper, coated and sautéed. A little heat on the tongue gave it some interest. So hearty is this soup that, if you wanted something light you could easily make a meal out of it.

I decided on two entrees, starting with the Lobster Roll. Unlike what you might suppose, this is actually a brioche New England Bun stuffed with lightly poached lobster—served cold. This is another item you could easily make a meal out of. It’s definitely not going to leave you feeling too full.

I also enjoyed the Duck Fajitas with succulent, juicy duck meat, caramelized onions, mushrooms and goat cheese which you can wrap inside of crepes. A decadent treat!

I saved some room for Chef Brandon’s Carrot Cake with mascarpone frosting. If Heaven serves desserts, this is probably on the dessert menu!

This was a wonderful introduction to the joys of outdoor dining on Grand Avenue. The Flying Toad is a special place and I will definitely be back.

Although The Flying Toad is open for dining Thursday-Saturday evenings, it also offers take out from 5-9 p.m.