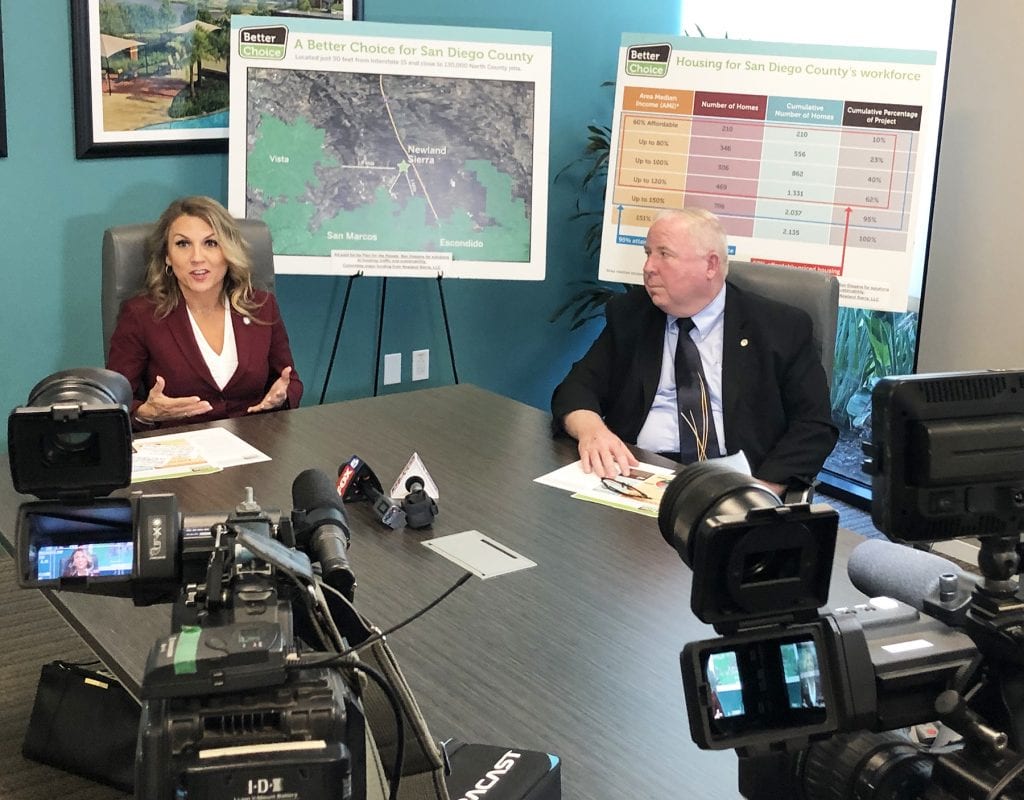 San Marcos Mayor Rebecca Jones and Mayor Paul McNamara of Escondido at the press conference where five Hwy 78 Corridor Mayors announced their support of the Better Choice Measure, aka Measure B, which would, if passed, allow the Newland Sierra project to forward.

Five mayors of Hwy 78 corridor cities last week endorsed Measure B, aka the Better Choice Measure. This measure, if passed by the voters of San Diego County, would authorize the Newland Sierra project.

The five mayors, Peter Weiss, Paul McNamara, Judy Ritter, Matt Hall and Rebecca Jones, signed a letter that begins: “As Mayors of the five cities along the 78 Corridor, which are comprised of nearly 645,000 residents and more than 283,000 jobs, we wholeheartedly endorse the Better Choice Measure. The Better Choice Measure provides all San Diegans a better choice for the development of private land located right in our backyard to not only benefit the neighboring cities in North County but all of San Diego County.

“This property is located right off of 1-15 and is currently designated in the County’s General Plan for up to 2 million square feet of commercial and office space and only 99 luxury homes. Instead of this outdated designation, we support the Better Choice Measure because it provides exactly what San Diego County needs — homes for working families. The Measure will create affordably-priced housing with advanced fire safety measures, 36 acres of public parks, traffic enhancements to surrounding roadways, and more than $175 million in public benefits, community investments and infrastructure improvements.

“The Better Choice Measure brings 2,135 new homes, 62 percent of which will be affordably-priced for local working families, including an exceptional commitment to designate 10 percent of the community for families making less than half of the County’s area median income. This is a significant advancement in providing accessible housing for all San Diegans, including firefighters, police officers, veterans and teachers, helping those who work in San Diego County live in San Diego County. This project would also be carbon neutral and one of the most sustainable housing communities in San Diego County. It permanently preserves 1,209 acres of open space, an area the size of Balboa Park. It also includes unique mobility solutions such as a shuttle system connecting residents and employees to the nearby public transit networks, and internal features such as electric bicycle and car sharing programs. The community would further encourage the use of electric vehicles by providing electric vehicle chargers in each garage and community based vehicle charging stations. We are proud to join the broad-based, bipartisan coalition of elected officials, public safety proponents, affordable housing advocates and community leaders all calling for San Diegans to Vote YES on the Better Choice Measure in March 2020.”