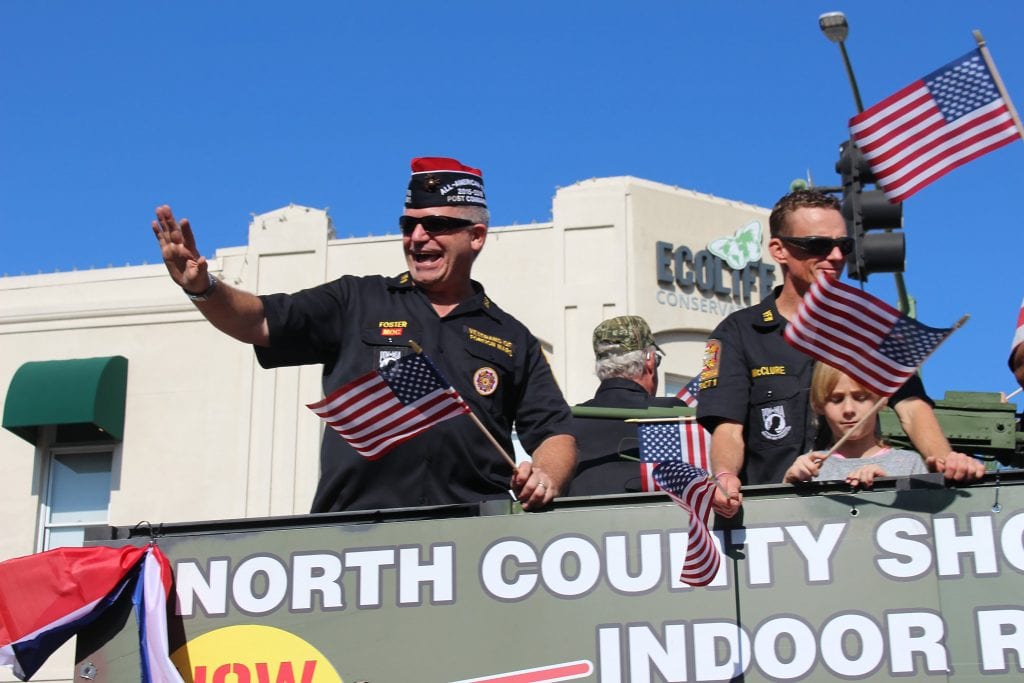 Nina Deerfield, one of the co-chairmen of Monday’s Esco Vet Fest and the first annual Veterans Day parade told The Times-Advocate after the event: “My goodness, I’m thrilled and surprised and happy!”

The parade, which someone counted as taking 4,000 steps from beginning to end, brought out about 1,000 people to the sidewalks lining Grand Avenue. Among the units were the Third Marine Aircraft Wing Band, veterans from modern conflicts, including Vietnam, Korea and World War II, bands from three local high schools, riders from local VFW and American Legion posts, and the Swift Intruders Landing Craft Assault Company 5 out of Camp Pendleton (or at least a pretty good facsimile.)

The American Legion Post 149 served 450 free barbecue meals and had to order out for more food. So probably a total of 500 meals were served, said Deerfield. “We invited the community for the free BBQ with live music provided by the Home Grown Tomatoes a blue grass band. They sang patriotic songs. Then we had a DJ. It was a lively group of people!” she said.

Many parade-watchers clustered around the intersection of Broadway & Grand where Doug Paulson, elementary school district board member and veteran high school teacher, was the announcer—providing local color and information on the 40 or so entries.

How did he get the job? “I made the mistake of attending the meeting,” he quipped. “But I’m honored to be asked to provide some commentary on this civic event. My daddy pointed out to me that I inherited his PTSD from World War II!”

Paulson said the real reason they picked him was this: “When it comes to not shutting up, that’s my superpower.”

Escondido Mayor Paul McNamara, a retired Marine colonel who served for 27 years, told the crowd, “A veteran is someone who wrote a blank check to his country payable up to and including his life.”

The mayor made a special presentation to Lt. Col. Mark Steinberg, who, during WWII flew B-26 bombing missions out of North Africa. He is an Escondido resident who has lived here since 1959 and with his wife Muriel had three children, four grandchildren and three-great-grandchildren, turned 100 on November 3.

Some—but certainly not all— of the other veteran VIPs who rode in the parade included:

Pvt. Jack Port, who fought as a rifleman in the Battle for Normandy and the Battle of the Bulge. From his landing at Utah Beach he was involved in non-stop combat for over 190 days. Riding with him was First Sergeant James Williams, a 10-year army veteran who served with the 82nd Airborne in Vietnam.

U.S. Navy veteran Bill Henson, who served on three warships in the Pacific during WWII.

U.S. Army Veteran Raymond L. Deming, who served in the 42nd Rainbow Division in France, where he received the French Medal of Honor for his actions in the Battle of the Bulge.

Capt. E. Royce Williams, who served in the USN in three wars, WWII, Korea and Vietnam.

Jesse Ramirez, who joined the U.S. Navy in 1944 and served in combat assignments through 1974, in WWII, Korea and Vietnam 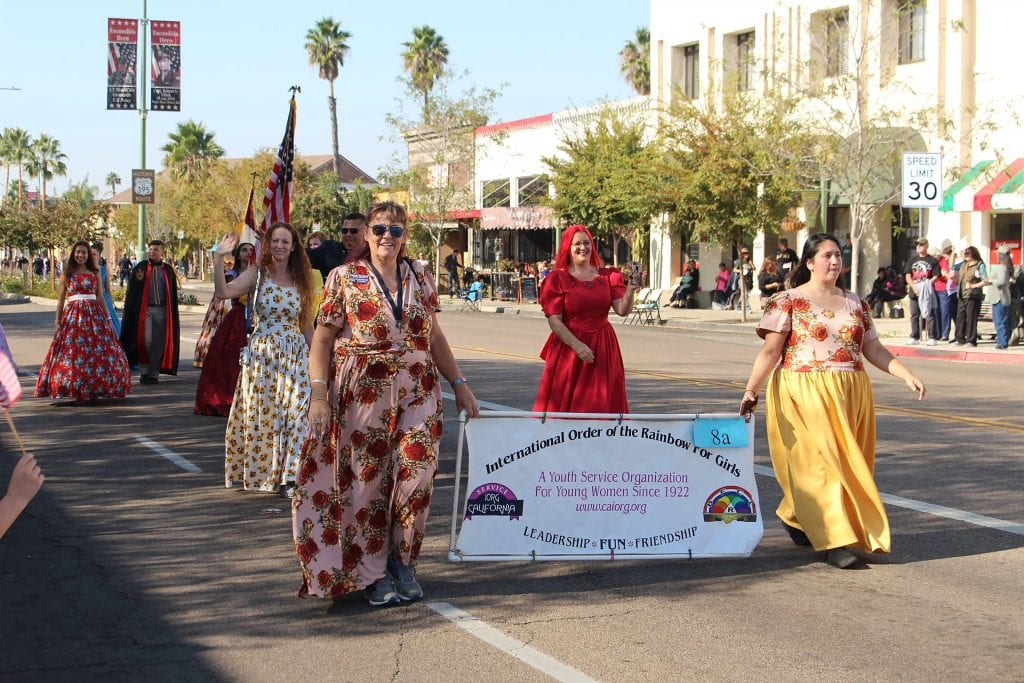 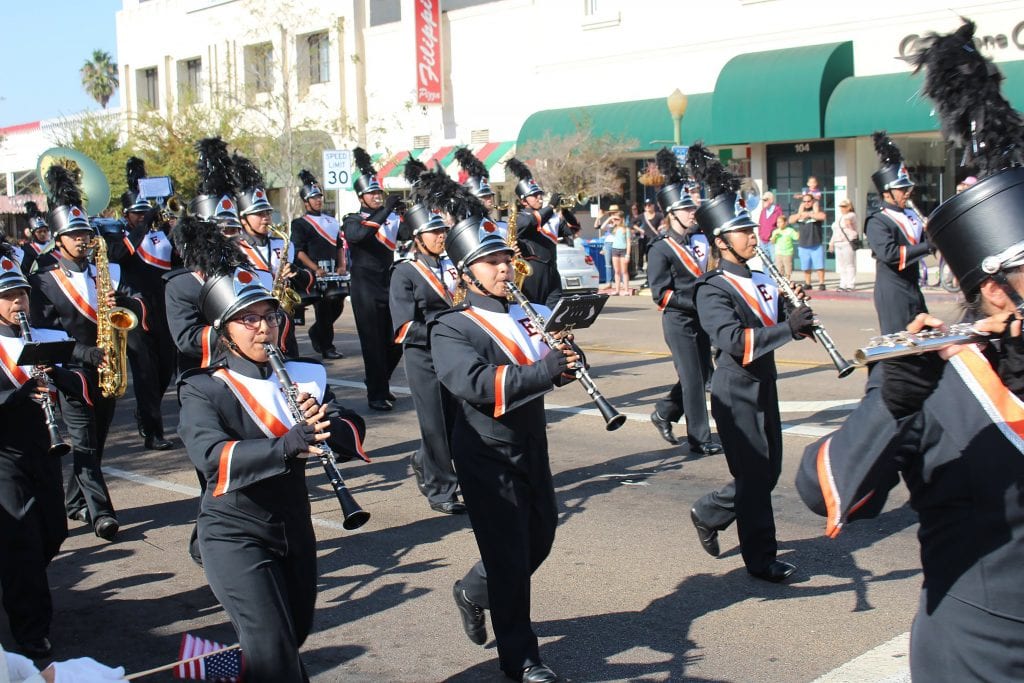 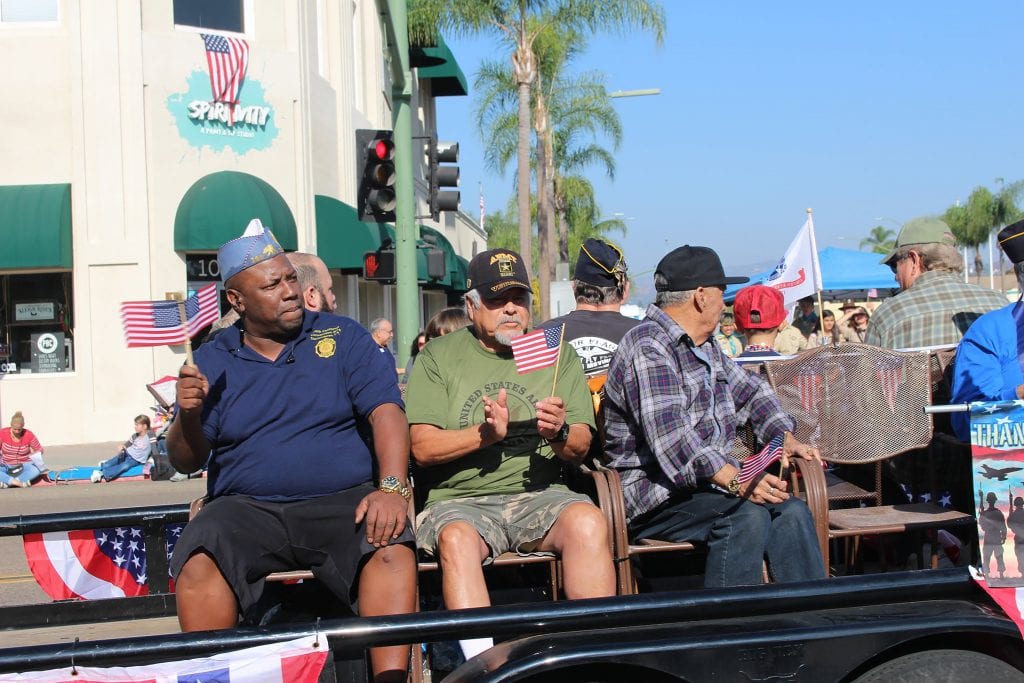 Pre-parade activities included a patriotic medley of songs performed by Center Chorale and the Children’s Chorale directed by Dr. Joe Stanford. But anyone was welcome to sing along to such favorites as “America the Beautiful” “When Johnny Comes Marching Home,” “God Bless America” and ending with the National Anthem.

The parade route was crowded from Kalmia to Juniper. The units came down one side, turned around and came up the other side of the street. Staging was between Orange and Escondido Boulevard on Grand.\

“We want more people out watching the parade next time, but we couldn’t handle more people at the post,” said  Deerfield. “We might be able to borrow some space next time at the Escondido National Guard base.” The Legon post was full—with games for the kids and other activities. Elected officials who spoke included Marie Waldron of the 75th Assembly District and State Senator Brian Jones of the 38th District.

Deerfield was co-chairman with Legion Post commander Mike Frank. “He is an amazing man,” she said. “He was very easy to work with.” They had about 60 volunteers assisting them, including the group Brothers of 6, which is a volunteer group composed mostly of veterans. “They were there at every single Monday meeting for the last three months,” said Deerfield.

She added, “Don Greene did an amazing job promoting the event. He did the T-shirts, brochures, and handled social media. I can’t say enough about him.”

One thing that both amazed and heartened Deerfield was how politics didn’t matter to this group of people. “Most of the people involved in this are rightwing people and they know who I am [she is an active member of the local Democratic party.] They were wonderful! Politics didn’t matter.”

She added that every comment she heard about the event was positive. “All I heard was that people loved it and were amazed by it. A lot of the sponsors I talked to said they were in for next year. That is amazing. I ended up raising a lot of money for this to pay the city. It’ll be easier next year for sure.”