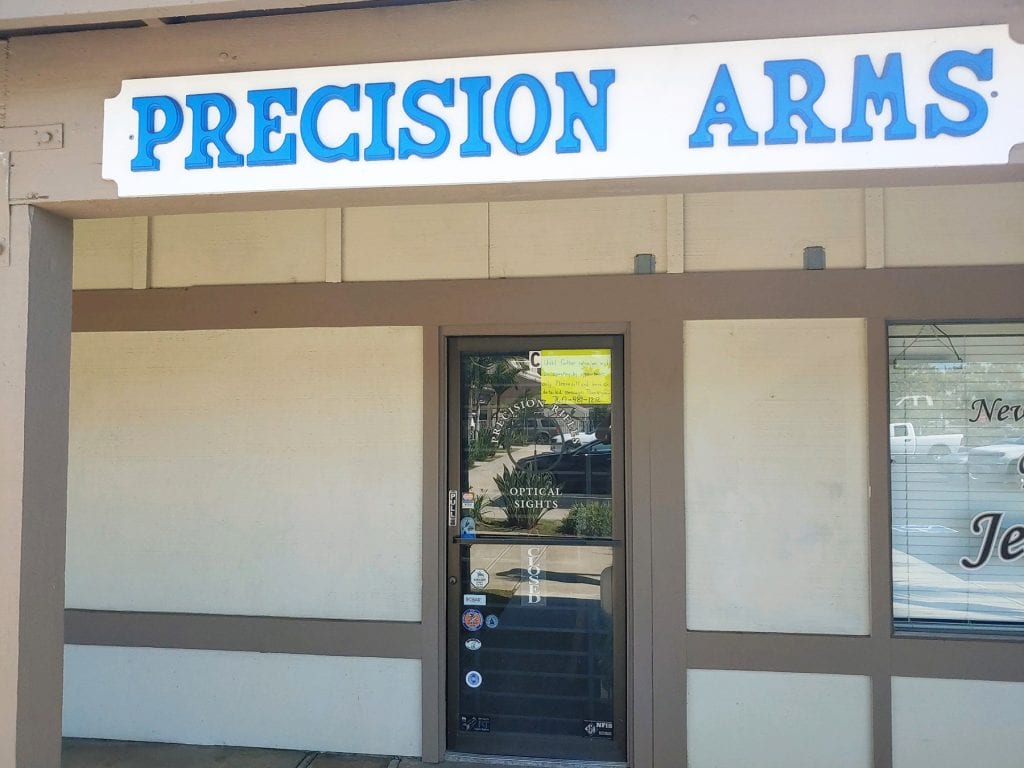 Precision Arms, a firearms dealership in Escondido, with a sign in the door informing customers of the social distancing requirements that mean they have to make an appointment if they want to buy a firearm.

In the liberal state of California, Governor Gavin Newsom is widely considered anti-gun. San Diego County Sheriff William Gore is also perceived by many as anti-Second Amendment. So gun owners were rocked back on their heels in wonder recently when Newsom and Gore both announced that firearms stores were considered “essential” industries and would be allowed to stay open during the pandemic—but with very stringent social distancing requirements.

Among those who counts themselves as “very surprised” is John Harms, who for 33 years has owned and operated Precision Arms in Escondido, which is located at 250 West Crest St., Ste. C.

“Even Newsom!” he exclaimed. “I’m sure a lot were expecting him to shut the stores down. I was a little bit floored with that, and the San Diego mayor agreed, as long as the gun stores are going to abide by the safe distancing. And Gore chimed on and said yes. Then Trump came on and said ‘I declare gun stores to be an essential business.’ That was pretty good news.”

Several weeks ago Precision Arms went to appointment. The door to the store remains shut and locked. “We basically set up appointments one half hour apart and bring them one at a time unless it’s a couple. We don’t allow people to line up,” said Harms.

He was very happy that Trump stepped in when he did. “I knew that some stores were told to close up. Getting the official stamp of ‘essential’ business was great. I’m sure other places that had closed up are back open now and breathing a sigh of relief.”

Harris said he has been doing a “major pick up” in the numbers of people buying guns since the outbreak. “More first time buyers than I have ever seen,” he said, adding, “We have done more FSC (California Firearms Safety Certificates) tests in a few weeks than all year.”

Asked what the most popular gun that he sold during this period is, he said, “Hard to say. If I had 50 Glock 17 or Glock 19 pistols I would have sold them all.”

You can find out more about Precision Arms by calling  760-489-1212, visiting precisionarms.com or their Facebook page. 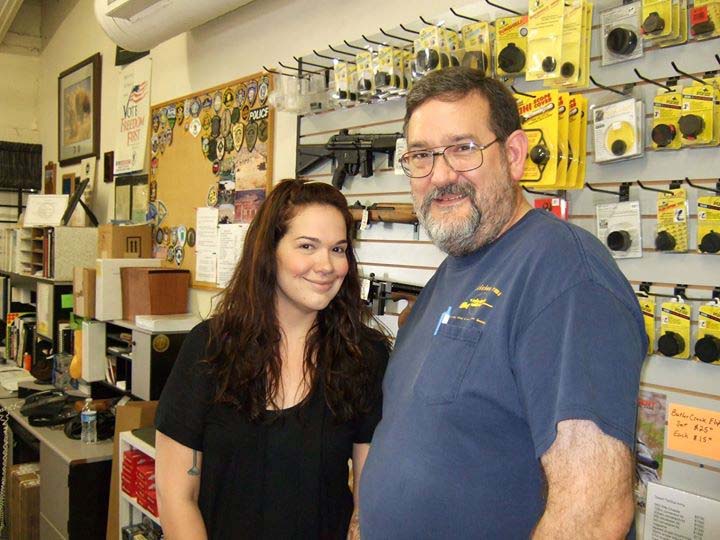 John Harms, owner of Precision Arms and his daughter, Liz.

Harms is a member of the San Diego Gun Owners PAC, which applauded both federal guidelines for opening gun shops as essential businesses; expressed gratitude to Sheriff Bill Gore, and “condemnation” for County Supervisor Nathan Fletcher, who had originally expressed the belief that gun stores were not an “essential industry.”

“Despite what you might be hearing from over-reaching, power-hungry politicians, gun shops are protected by the federal government and are absolutely deemed essential,” said Michael Schwartz, executive director, SDCGO. “This virus pandemonium has uncovered politicians who will use a crisis as an opportunity to restrict Constitutional freedoms and threaten everyone’s Second Amendment civil rights. Law-abiding Americans must never be deprived of the right to defend themselves and their loved ones at any time.”

In a memo dated March 28, 2020, the Department of Homeland Security’s Cybersecurity and Infrastructure Agency (CISA) identified “workers who conduct a range of operations and services that are typically essential to continued critical infrastructure viability.” Appearing on page 6 of the 15-page CISA document that lists essential critical infrastructure workforce is the following: “Workers supporting the operation of firearm or ammunition product manufacturers, retailers, importers, distributors and shooting ranges.”

The government document, available at www.SDCGO.org/GunShopsEssential, states its list of essential workers is “advisory in nature” and “intended to help state, local, tribal and territorial officials as they work to protect their communities.”

Schwartz said he was grateful about recent statements by San Diego County Sheriff Bill Gore who said his department will not force firearm dealers in county jurisdiction to close. Calling their service valuable, Gore asked store operators to follow social distancing rules and find alternative ways to sell guns and ammunition, such as online or by appointment. Gore said he was concerned that forcing gun stores to close would lead to illegal sales in the black market. He said gun stores ensure legal and prudent sales by carrying out state-mandated measures such as background checks.

Schwartz added he was “extremely disappointed” with statements by Supervisor Nathan Fletcher who also cited opinions from attorneys and said in a recent press briefing, “We consulted with our county counsel. It is not our belief that gun stores are essential businesses based on the governor’s executive order and, so, therefore, they should not be open in the county of San Diego.” (www.facebook.com/NBCSanDiego/videos/2726661324116994/)

Schwartz said the PAC’s 1,800 members have a message for public officials dealing with the virus hysteria.  “Our members have asked us to encourage all elected officials and health professionals to consider their words carefully and proceed with caution when considering public policies that trample on freedoms central to American life and the economic security of the country,” said Schwartz.