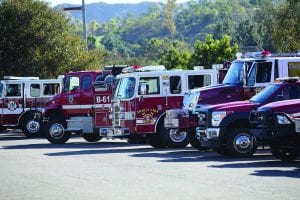 Kit Carson Park is the site this week of the Cal Fire base camp used as the incident command post for the Lilac Fire. There were fire engines from all over the country, here to assist San Diego County. Photos by Lenny Kerbs

Although Escondido thankfully dodged the fire bullet this time, the city’s Kit Carson Park was ground zero for firefighting in the County during the last week.

Beginning on 11 a.m. or so on Thursday, the Lilac fire was the only major fire event during the last several days. It began near the intersection of I-15 and Hwy 76 and spread east into Bonsall and Fallbrook.

Escondido Fire Chief Rick Vogt told The Times-Advocate: “The incident command post and base camp at KCP is where the Incident Management Team has been running the fire.  Although there were no other fires, it could have managed others too.” According to the chief, Lilac was the unified command with Cal Fire, North County Fire and the San Diego Sheriff’s Department.

The Incident Command Post and the Fire Camp was set up at Kit Carson Park on Thursday night. The base is scheduled to be demobilized Wednesday morning (December 13.)

Said Chief Vogt: “When the fire started near Fallbrook we sent two fire engines and a chief officer. On Saturday one of those engines was redeployed from Lilac up to Thomas.” The other engine assigned to Lilac later returned.

Escondido employees were also busy preparing for the possibility that a fire might head this way, and to help set up a shelter to help displaced fire victims or those who had to be evacuated ahead of the fire.

Teresa Collins, communications officer for the city, reported that the city did a level 1 activation of the Emergency Operations Center. That’s the lowest level, but it meant that several employees stayed in the EOC Thursday and Friday to monitor the winds and help with the coordination of 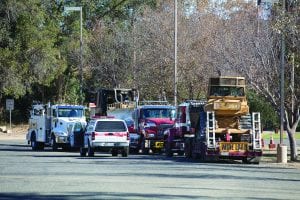 the shelter the city maintained and the Cal Fire base camp at Kit Carson.

“Along with the Red Cross we were able to house and feed evacuees and their pets,” said Collins. “We even opened one room at the East Valley Community Center so people could sleep with their pets (usually they have to stay crated in a separate room.)

Across town at Kit Carson Park, Cal Fire started to set up around 10 p.m. on Thursday night and had a full activation by midday Friday. According to Collins, “They roll in with everything that they need: a full kitchen, restrooms, shower facilities, trailers for meetings, tents if needed for sleeping. Cox Cable was our first thing to run lines to get them cable and internet. It is really incredible.