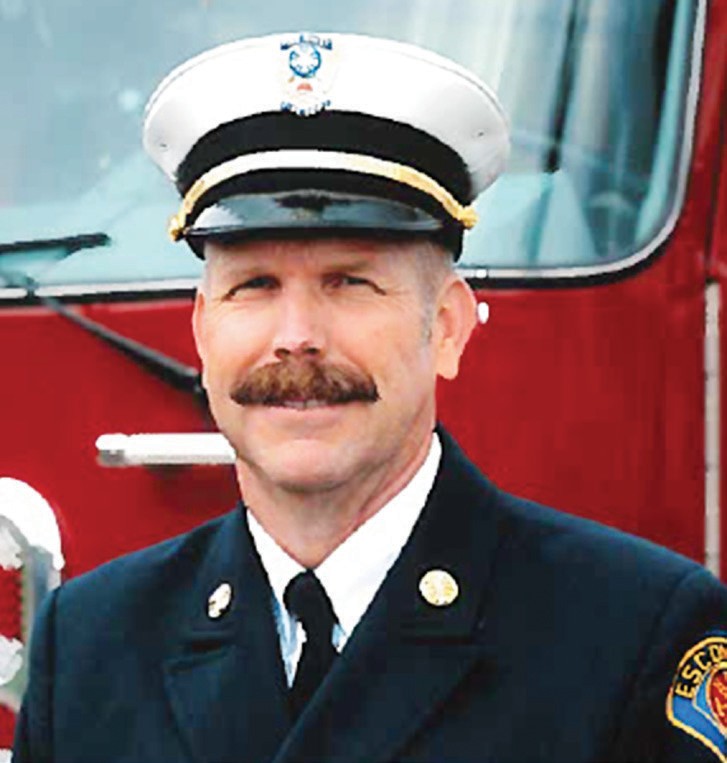 Mike Lowry remembers his first call, a medical emergency, as if it were yesterday. It just so happens that it was also his most memorable call.

“I was still in the academy,” he re­calls. He was doing a ride along as a cadet when they answered a vehicle versus a pedestrian incident. He was assigned to bring along the oxygen in case it was needed. He carrying the ox­ygen to the victim when his supervisor said it wasn’t needed. “It’s an 1194,” said the supervisor. That was code for a fatality. The victim had almost been cut in half.

“That was my first call,” recalls Lowry. It would not be his last.

Just short of 34 years on the Escon­dido Fire Dept., (EPD) where he start­ed as a cadet and ended up as chief, Mike Lowry said goodbye last week to a job and an organization that shaped his life, and which he helped to shape.

Lowry is a man who literally worked his way up from the lowest rung of the fire ladder to the highest, from cadet to chief.

The Times-Advocate caught up with him on the Monday after the Friday when he said farewell to his job and about 250 friends and colleagues got together to wish him well with a big party and barbecue in his honor.

His retirement party was held on June 3 at his gym, where they moved the exercise equipment and created a hall. Former chief Vic Reed was the MC and Capt. Joe Portman did the cooking.

“It was all very humbling to have that many people show up,” he ob­served.

Lowry’s career has been filled with memorable moments. He attended school to become a paramedic. Dur­ing those seven years as a paramedic he delivered seven babies. “That was memorable,” he said. The parents of one of those babies brought the little girl to the station on her birthday for several years so that the firefighters could see her grow up.

“One night, when I had a young infant of my own at home I went to an accident where two infants were killed,” he recalls. When he got home that night he walked past his wife al­most in a daze and went straight to where his daughter was in her crib, picked her up and held her for a long time.

And then there was the 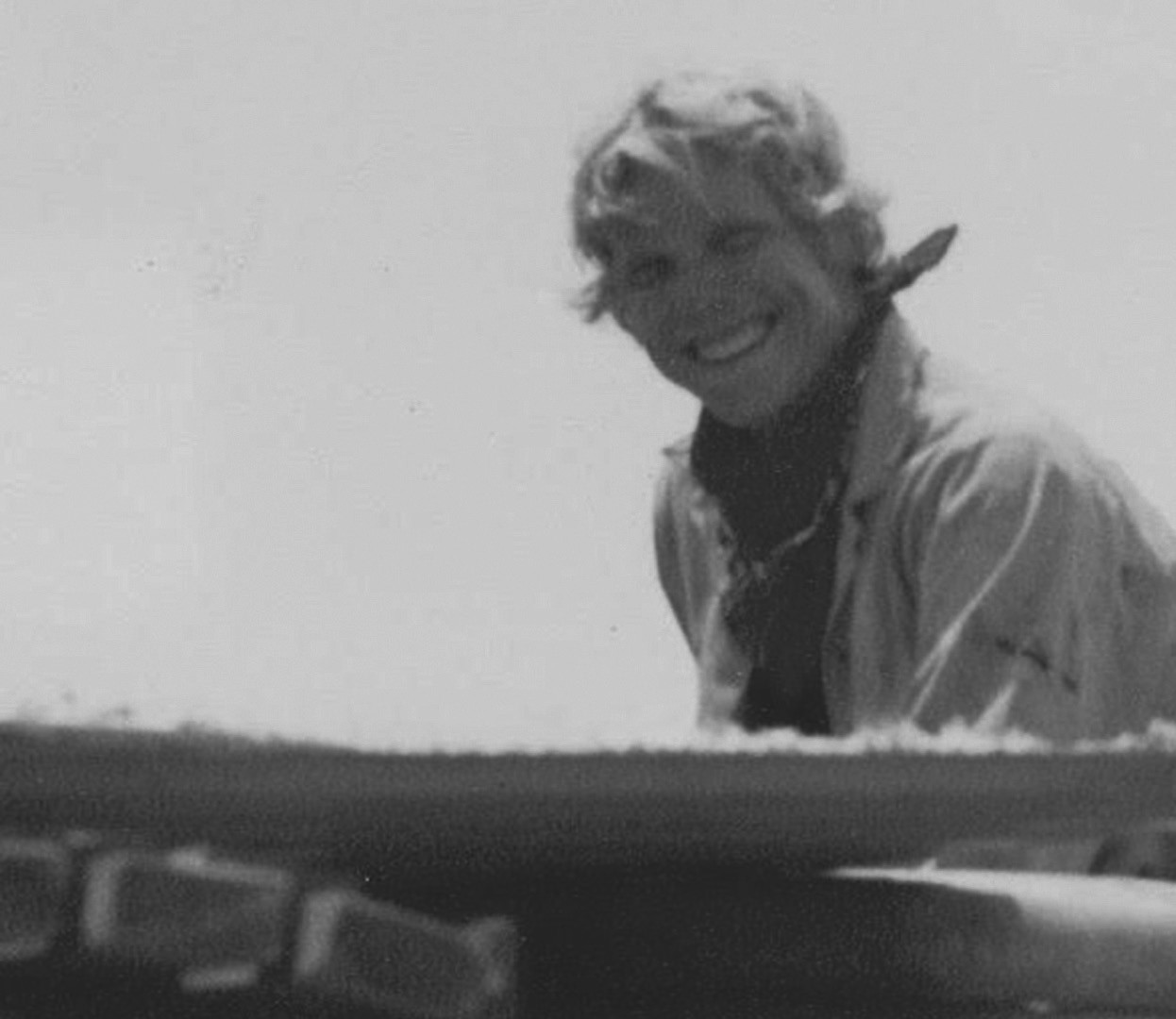 night that changed his life forever. In 1992 he was a captain of a truck company that answered an accident call at the bottom of the Valley Center grade near Lake Wohlford Road & Valley Parkway.

A mother and her two daughters were in a vehicle that was hit head on by an impaired driver. “We were cut­ting her out of the car with the Jaws of Life when she died. Her daughters were OK,” he recalled.

“That call changed my life. Up until that time I tried to be a good person and occasionally went to church.” But when he got home from his shift he told his wife, “Tomorrow, let’s get the girls ready and attend church.” The incident made him ask himself, “If I died tomorrow, where would I be?”

He and his family have never stopped attending church and cur­rently are members of Mission Hills Church in San Marcos.

“Faith has provided a grounding power. It has made me a better hus­band and father and a better fire offi­cer and chief,” he said.

Lowry joined the fire services in 1979 as a paid call firefighter with the Alpine Fire Department. He worked for the U.S. Forestry Service as a sea­sonal firefighter from 1981-82 and on September 20, 1982 was hired onto the Escondido Fire Dept. as a cadet. Last Friday he completed seven and a half years as chief.

During his time with the department the city and the organization more than doubled in size. In 1982 EPD had four engines and one ambulance. Today it has seven engines, five ambulances and one battalion chief deployed from seven fire stations. The city’s popula­tion went from 66,000 to 145,000 and the department has also taken on the task of covering the Rincon Del Dia­blo Municipal Water District, which has an additional 15,000 residents.

When Lowry began as a cadet the department had recently added para­medics. In the ensuing years the de­partment has taken on the responsi­bility for hazard materials (haz-mat) technical rescues (which include res­cues in enclosed spaces such as work­ers in ditches over chest height, or inside vaults or silos) and swift water rescues.

It used to be that firefighters per­forming swift water rescues wore the regular turnout gear that they wore when responding to a fire. Today they use specialized gear and 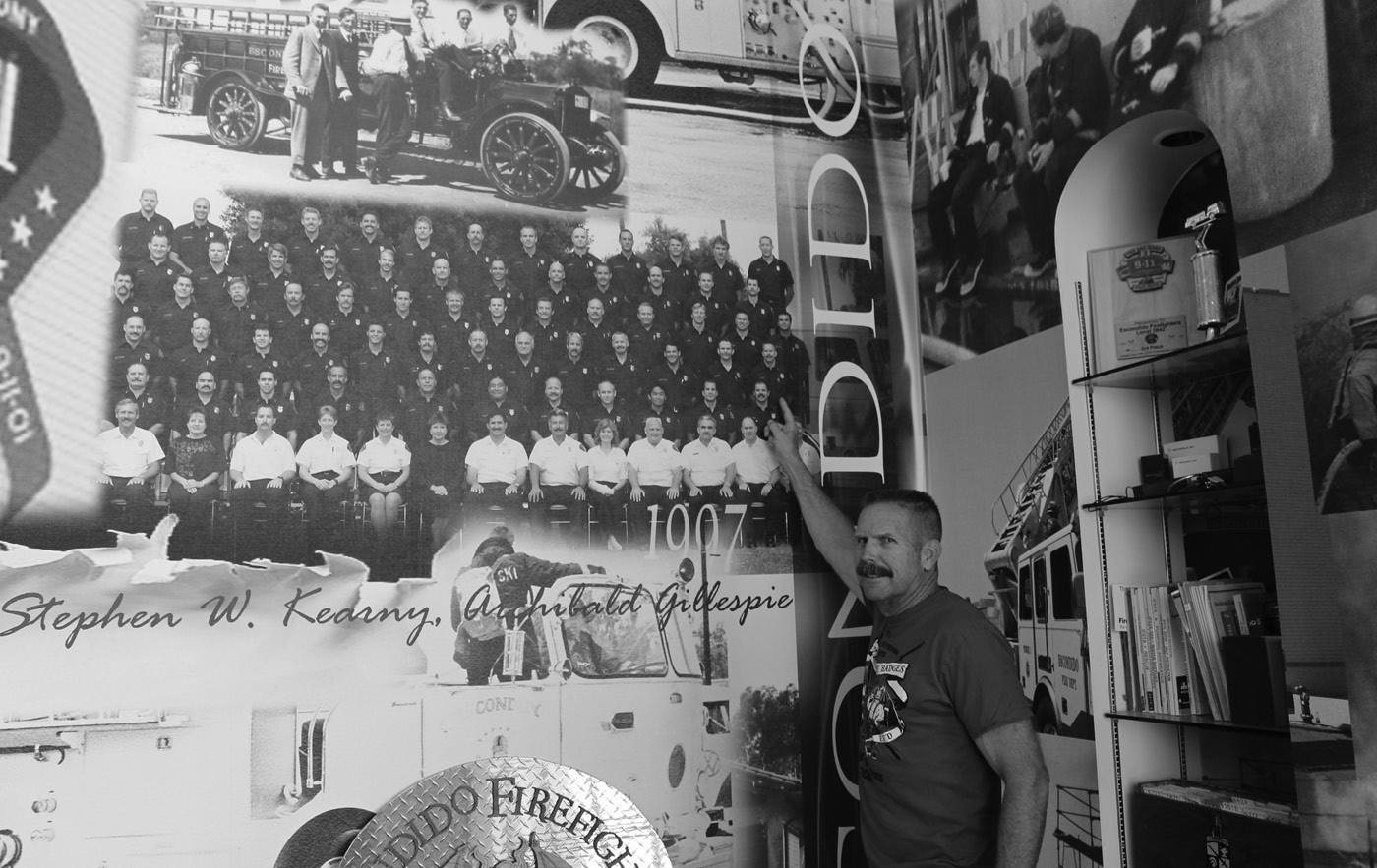 Lowry points a photo in the Station 1 museum that shows the firefighters from 1997. His finger indicates his place in the photo.

When I interviewed Lowry in one of the conference rooms at Station 1 (located on Quince Street) he point­ed to a wall where they store special floatation devices used in swift water rescues. They also have specialized equipment for high angle rescues that include rappelling ropes for scaling cliffs and other high places.

Also added to the repertoire of the fire department during his career was the Jaws of Life. “The Jaws of Life was becoming more specialized and we began to add urban search and res­cue teams,” he recalls. Such teams are used in the aftermath of an earthquake or a hurricane to locate survivors.

Escondido deployed its urban search and rescue squad and then Captain Lowry to Texas to respond to Hurri­cane Rita in 2005.

One noticeable change Lowry has seen is the increased severity of wild land fires. At one time disastrous wild­fires were a relatively rare occurrence. “Now it seems like we have one ev­ery year,” he said. “Whether it’s a big campaign in the state, or one in the north or south.”

One such campaign involved the 14 fires that occurred in May of 2014, and which included the Cocos and Poin­settia fires, and which, by the time they were done, had burned 26,000 acres and 65 homes, some of them in Escondido.

The mission of putting out wild land fires varies significantly from the mis­sion of fighting structure fires, which is an urban department’s primary job. Both involve fighting fires, but each has unique skill sets.

Sometimes EPD has to do both. The city has some wild land-urban interface areas, such as the Rincon water district, land near Lake Hodges, Daley Ranch and the San Dieguito River Park, which runs through the city limits.

The job of putting out a structure fire is to prevent it from spreading to other structures and to contain the fire within the structure.

A Type 1 engine designed for ur­ban fires has pumps that can spray hundreds of gallons per minute using large diameter hoses. A wild land fire engine is smaller, more maneuverable, with narrower 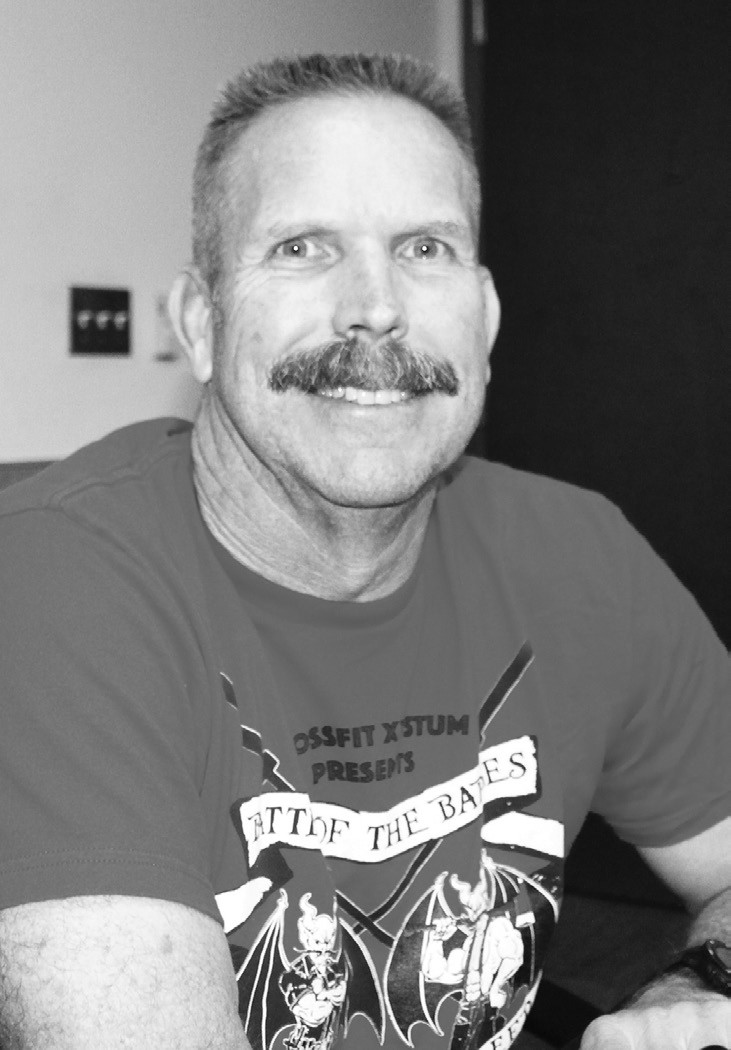 Now retired, Mike Lowry relaxes and contemplates what’s next for him.

hoses and a smaller flow rate of 30 gpm, as opposed to 100 gpm for an urban engine.

Lowry is proudest of how his de­partment made it through the econom­ic downturn of several years ago. “We worked with the firefighters associa­tion with whom we have maintained a good relationship.” During those challenging times, “we focused on our mission and did not focus on what was taken away.”

Those were days of pay freezes, no raises and some terminations. They lost some people and although the voters in 2004 approved of Prop. P to provide the city with the seven sta­tions and seven engines it has today the city didn’t have the funds to staff them for several years.

He also proud that once those eco­nomic bad times were past that they were finally able to staff all seven sta­tions and seven engines.

They also worked with the associa­tion to fully staff their engines with three firefighters and one paramedic who doesn’t put out fires but is dedi­cated to medical calls. “That’s an entry level position that allows us to train the paramedics in the Escondido way of doing things,” he said.

Over the years, Lowry’s focus has been on “our mission, our vision, our values, honor, duty, pride and cour­age.”

The department’s values, “are to provide legendary customer service, meeting or exceeding the public’s ex­pectations— to go above and beyond,” he says.

He has always urged his people to “remember your faith, whatever that may be, your family, your friends and the department.” Sometimes the lines get blurred in an organization where co-workers are almost members of your family. “We are a family and a team that is focused on faith, family, friends and work,” he says.

Lowry and his wife, Cheri and their children and grandchildren—about a doz­en in all— plan to take a Mediterranean cruise together sometime this summer.

“I’m going to use the time as a kind of sabbatical to figure out what’s next,” said Lowry. He has been doing some consult­ing in the fire industry. But he also is in­terested in doing some cross fit training at his gym, CrossFit Xystum, which is located in the building that once housed the police department headquarters.