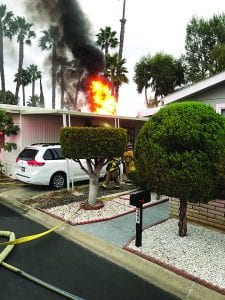 On November 1, at about 5:14 p.m., the Escondido Police and Fire Communication Center received a report of an oven on fire inside a mobile home at 2300 East Valley Pkwy (Imperial Mobile Home Park). A structure fire response was dispatched to the location. The first arriving engine reported a large amount of smoke coming from the roof of residence.

Aggressive action by the firefighters contained and controlled the fire in about 30 minutes. The mobile home sustained major damage to kitchen with minor to moderate smoke damage throughout the home. There were no injuries to firefighters. The owner of mobile home was treated and transported to Palomar Hospital for possible smoke inhalation. In all, four fire engines, one truck, one rescue ambulance and one Battalion Chief responded to the fire.