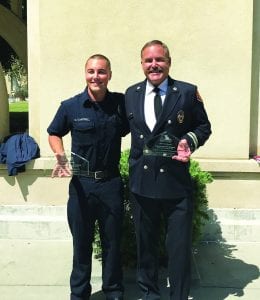 Earlier this year, Captain Barratt and Firefighter Cantrell came to the assistance of a man who had collapsed. Both were off duty and happened to be in the area. They started CPR and by the time Encinitas medics arrived to transport, the patient had regained his pulse and was breathing.

The award recognized Captain Barratt and Firefighter Cantrell’s dedication to service both on and off duty. Captain Barratt also received recognition from Congressman Duncan Hunter’s Office.