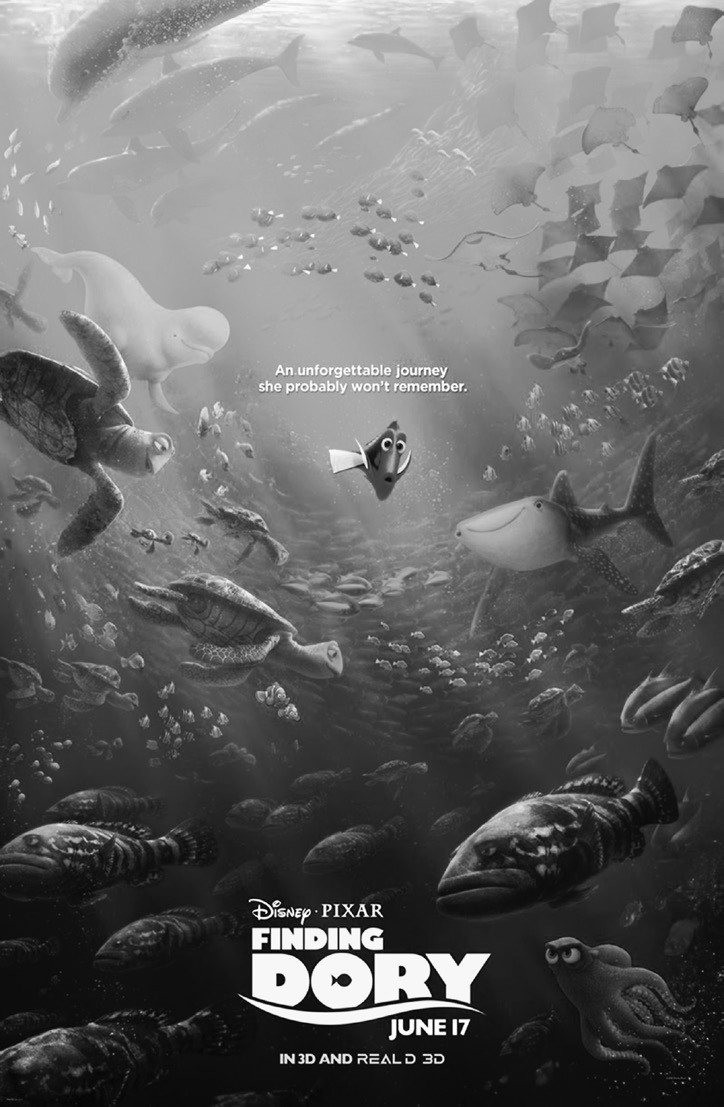 Pixar has an excellent track record when it comes to sequels, but for a min­ute there it looked like “Finding Dory” wasn’t going to work. The aquatic ad­venture “Finding Nemo” came out all the way back in 2003; kids who grew up with it aren’t kids anymore. Maybe they had… forgotten about it? Aside from that, blue tang Dory (Ellen De­Generes) made a good sidekick in the original, but was she really up for car­rying a whole film by herself? No need for worrying, it doesn’t take long to see that the film is a success on every level. You just have to look at the $9.2 million it made on Thursday night (on its way to a record $136 million weekend) to know that the film is a commercial suc­cess, and you just have to watch Dory in the first few minutes to know that it’s a creative one.

We first see Dory as a child in this movie, and whatever defenses you have against cuteness, she swims right past them. Her eyes take up half of her body, and her words and actions are fittingly precious. She and her parents (Diane Keaton and Eugene Levy) struggle together with her short-term memory loss, and they’re as admirable as can be. But Dory soon gets separated and can’t find her way back. She grows up among strangers, fish with varying degrees of tolerance about her disability. Eventu­ally she aligns herself with clownfish Marlin (Albert Brooks), and together they go looking for his son Nemo, with Dory forgetting that she’s supposed to be looking for her own family.

Now it’s a year later and Dory is a member is Marlin’s family. Nemo (Hayden Rolence) is still in school and Dory helps out as a teacher’s assistant. A lesson in migration teaches the class that animals have instincts that lead them back to their families. Dory real­izes that she must have a family, and slowly she starts regaining childhood memories. She sets off to find them, and Marlin and Nemo tag along, forever in­debted to their forgetful friend, but sure enough they soon find themselves sepa­rated, trapped, and in danger.

The adventure leads them to a marine theme park, which at times resembles The Seas with Nemo and Friends at Disney’s Epcot park. There they meet a colorful cast of supporting charac­ters, including Hank the Octopus (Ed O’Neil), whose secret shame is that he’s a septopus, and who wants noth­ing more than to be shipped to a facil­ity in Cleveland. Then there are whales Destiny (Kaitlin Olson) and Bailey (Ty Burrell). She has vision problems and he allegedly has hearing problems. They have to work together and push each other. A pair of sea lions (Idris Elba and Dominic West) are also scene- stealers, especially when they’re fight­ing off a third sea lion who’s trying to usurp their favorite rock.

Pixar movies are known for working some serious subject matter into their zaniness. This entry doesn’t contain as much loss as some other Pixar films (including “Finding Nemo”), but it deals a lot with frustration. Characters often feel frustrated when dealing with Dory, and Dory of course has to deal with the brunt of her memory loss. The frustration is captured in a sympathetic way, but the characters’ determination to overcome their unique obstacles teaches kids a good lesson about hav­ing patience with people who have dis­abilities, whether it be friends, family, strangers, or themselves.

The action and humor are exactly what you’d expect from a Pixar mov­ie. Compared to most kids’ movies, they’re excellent. Compared to other Pixar movies, they’re fine. I have a few nitpicks like how the gilled characters always find a container of water handy and some gags that I think are inferior versions of gags from the first movie (the teacher couldn’t come up with a more elaborate migration song?), but there’s a healthy amount of fun and cre­ativity on display. More than anything, “Finding Dory” is a heartfelt movie with some heart-pumping moments and some hearty laughs.

Three Stars out of Five “Finding Dory” is rated PG for mild thematic elements. Its running time is 97 minutes.