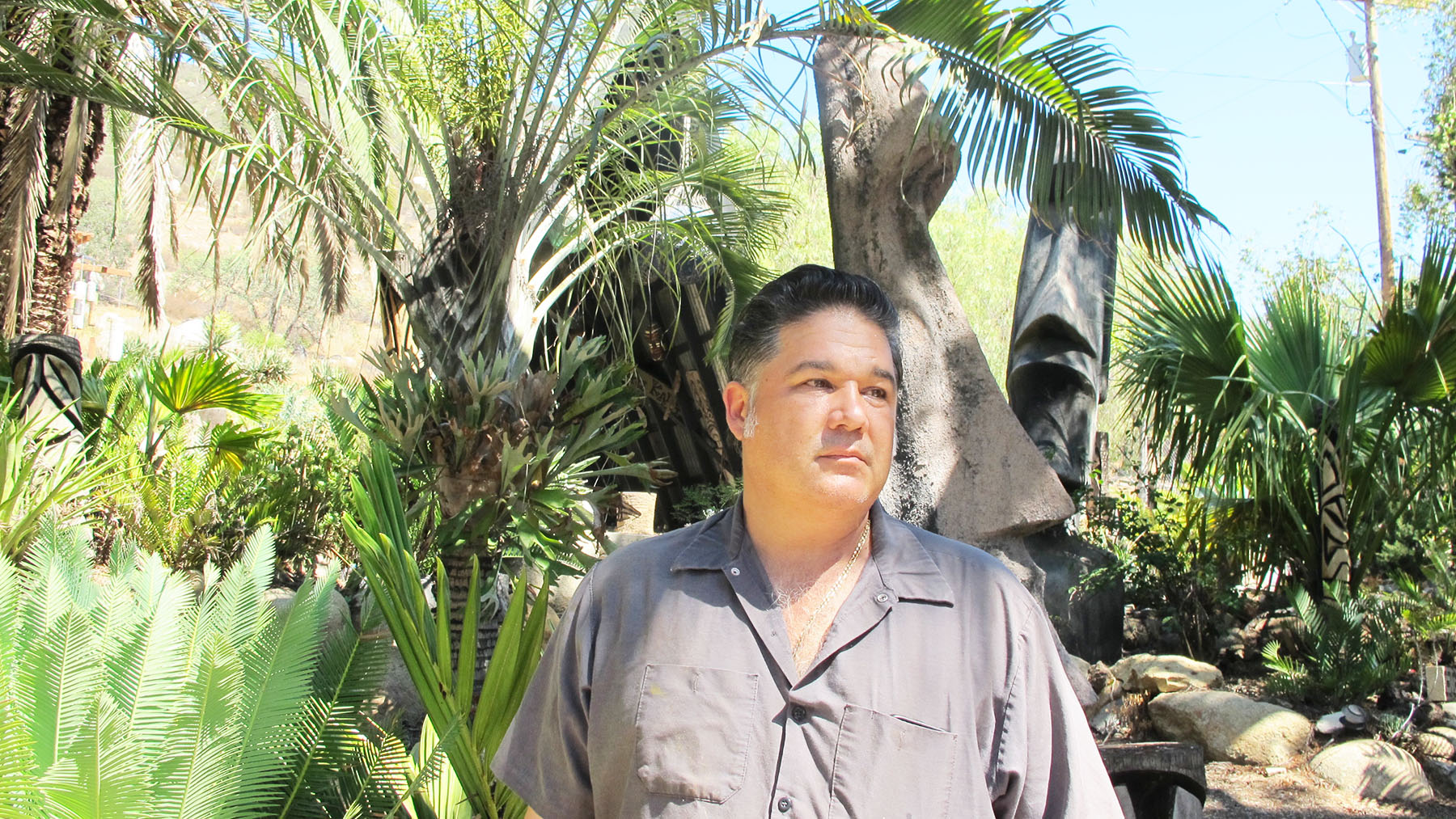 The artist, Bosko Hrnjak, whose successful efforts to revive “Tiki” are the subject of a just-released documentary film.

This week the documentary film “Bosko and the Rebirth of Tiki,” about Escondido resident  Bosko Hrnjak’s art and role in the Tiki revival is opening at the Egyptian Theater in Hollywood.

The documentary is about Hrnjak, his history and how he came to rediscover the lost art of Tiki. It follows him through his childhood, college, early days in the art scene up to now.

In the mid 80s Hrnjak began his quest to revive a lost art form, to bring back Tiki as sculpture.  He was the first to sculpt full size Tikis again, first to make Tiki ceramics (until the following century), first elaborate home bar and museum “The Kapu Tiki Room.”  He designed and outfitted the first commercial Tiki bar in North America since the 1970’s: the “Taboo Cove” in Las Vegas.  His works are cherished by collectors and in hundreds of commercial spaces all over the world.   Each piece is handmade in his Southern California studios.

You’ll also see his work at many Southern California locations of Trader Joe’s, Disneyland California Adventure, Margaritaville in the Mall of the Americas, Tonga Hut in Palm Springs, Smuggler’s Cove, San Francisco and Don the Beachcombers- Sunset Beach, to name just a few.

Hrnjak told The Times-Advocate how the film about his career came to be. “Rob Wilson, a producer in LA  was/is a client, thankfully I had no idea how successful he was.  He came to me proposing we do a ‘short’ documentary about my work, he realized there was a story behind me that people in the Tiki scene now were not aware of.  Rob brought the crew last January, the director Kurt Mattila interviewed my wife and I, Kurt also came to realize there was a bigger ‘story’ here and it’s blown up since then, everyone working on the documentary are top Hollywood talent.  It has been unreal, I still cannot believe it’s happening, the whole team is amazingly talented, I keep wondering when am I going to wake up?”

According to Hrnjak, the Tiki (Polynesian pop ) craze had four phases. Pre-Tiki, bars restaurants which were more South Pacific themed escapist environments, think walking into an elaborately decorated South Seas hut with a few Tiki carvings.   Don the Beachcomber started this movement in Hollywood after prohibition 1932 or 33, it was a huge hit.

The high point of Tiki starts in the late 1950’s into the 60’s. “The figural symbol Tiki becomes the icon of the movement, bars, restaurants,  apartment buildings, hotels/resorts (San Diego had a huge concentration of these buildings around Mission Bay and Shelter Island),  etc. Post WWII war America really embraced that style in some cases because so many soldiers had served in the South Pacific during WWII they had a ‘connection’ to that culture, then Hawaii became a state 1959 and America had a physical connection, Disney’s Enchanted Tiki room 1963 popular culture embraced it with the Disney touch, it was a full blown craze.” 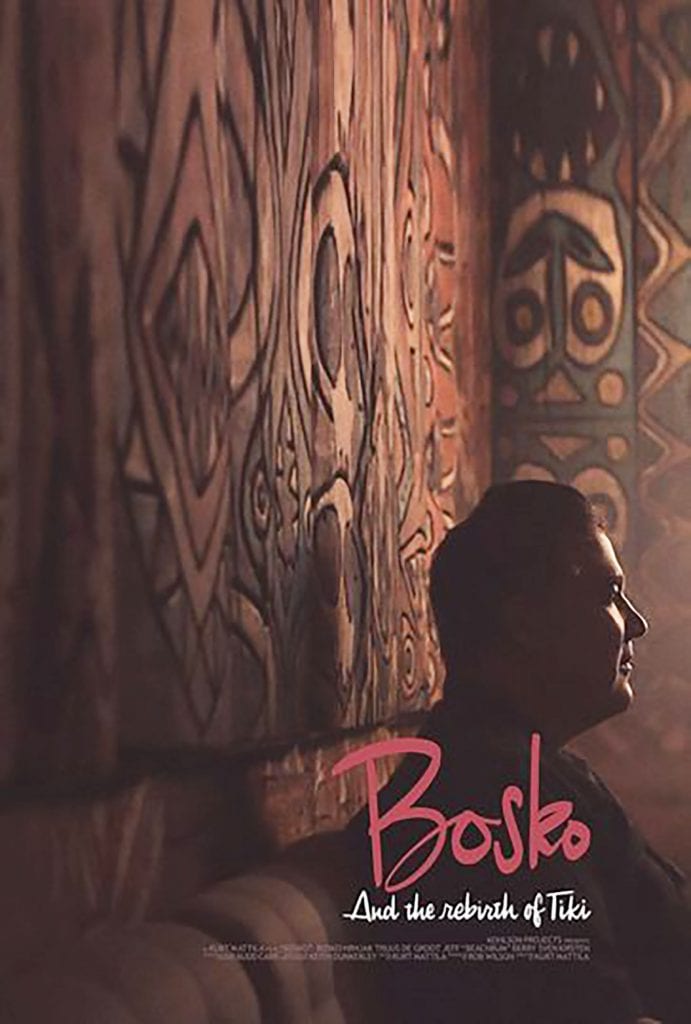 The end of the Tiki/Polynesian Pop phase happened in the middle of the 1970s. “For a variety of reasons, it was over, Tiki was forgotten and then began to devolve,” says Hrnjak.

And in the endless cycle of life and art, there came a time of revival for Tiki. As Hrnjak describes it, “By the late 80’s early 90’s very small groups of collectors, artists began to rediscover (something most of them had no real experience with) Tiki and the lost culture it represented. It becomes an underground movement. About 1993 I meet these (LA) Tiki people, soon after I start carving making mugs and selling them (I was the only one doing this), in 1996 Jeff Beachbum Berry publishes the first of many ‘lost’ tropical drink books and its history.”

These books, recalls Hrnjak, “were hugely influential for the revival and the craft cocktail movement in particular, the drinks originally (30’s thru the 70”s) were secret until Jeff broke these down.  In 2000 Sven Kirsten published ‘The Book of Tiki;’ essentially the history of Polynesian Pop in America. I believe he did three or four books with Taschen. They were instrumental in helping turn this back into a mainstream craze again. We’re on to the third or fourth generation of the revival, depending who you ask.”

Hrnjak grew up with Tiki art as a child in the San Gabriel Valley.  “It was always in my environment,” he recalls. “From the back seat of my parents 64 Impala, I was amazed by the nightly drive past all of the mid-century architectural landmarks. By day, peddling my bike, it seemed quite natural to see huge Tiki Gods, waterfalls, and volcanoes in front of A-frames. But by the mid 80’s, when I started buying my own Tiki mugs, I realized there was something odd about seeing the Polynesian style transplanted to Southern California.”

He recalls, “in 1975 we moved to Escondido, in 1985 I went to college at Art Center College of Design Pasadena, returned to my childhood neighborhoods and suddenly realized there was something very odd about having huge Tikis in front of apartment buildings in Southern California.”

the Kapu Tiki room— to house his vintage Tiki collection (which he had been collecting all through college). “I needed large ‘Tikis’ for the bar, but you couldn’t find them, that is essentially why and how the business started.”

Someone dumped a load of palm logs in a vacant lot nearby and he took some home to carve for his Tiki bar. A couple of weeks later he produced his first mask and pole designs and then shifted to ceramics to do his own Tiki mugs.

He recalls, “I have always held the forgotten masters in the highest regard, so it was an honor when, in the late 90’s, Truus and I met Mr. Westenhaver, creator of the legendary Witco furniture company. It turned out we had both attended Art Center School Of Design in Pasadena, although 40 years apart. Due to his advice and support I started my  burnt-wood carving style. My father taught me how to carve (subtractive) palm wood, I had already been sculpting (additive) large stucco sculptures,” he says.

Into the early 90’s many artists were drawn to the image of Tiki (who was the God of artists among other things) and created works in 2-D paint, drawing etc. “I was the first to represent Tiki as a 3-D form,” says Hrnjak. “I sculpted; they painted. This is what set me apart from anyone else.”  He also started the ceramic mugs as art. “Although a big component of the original movement, they were never viewed as ‘art’ until I started them. This didn’t catch on until after 2000. I created the first new Tiki bar (since the 70’s) Taboo Cove at the Venetian in Las Vegas 2001.  We’ve done hundreds of other commercial jobs all over the world since the beginning.”

“Bosko and the Rebirth of Tiki,” a documentary about Bosko Hrnjak’s art and role in the Tiki revival, premiered on July 14 at the Egyptian Theater in Hollywood. The film was produced by Rob Wilson and directed/edited by Kurt Mattila.

To see what Bosko Hrnjak is doing today or pick up some of his art, Tikis, mugs or paintings go to tikibosko.com. 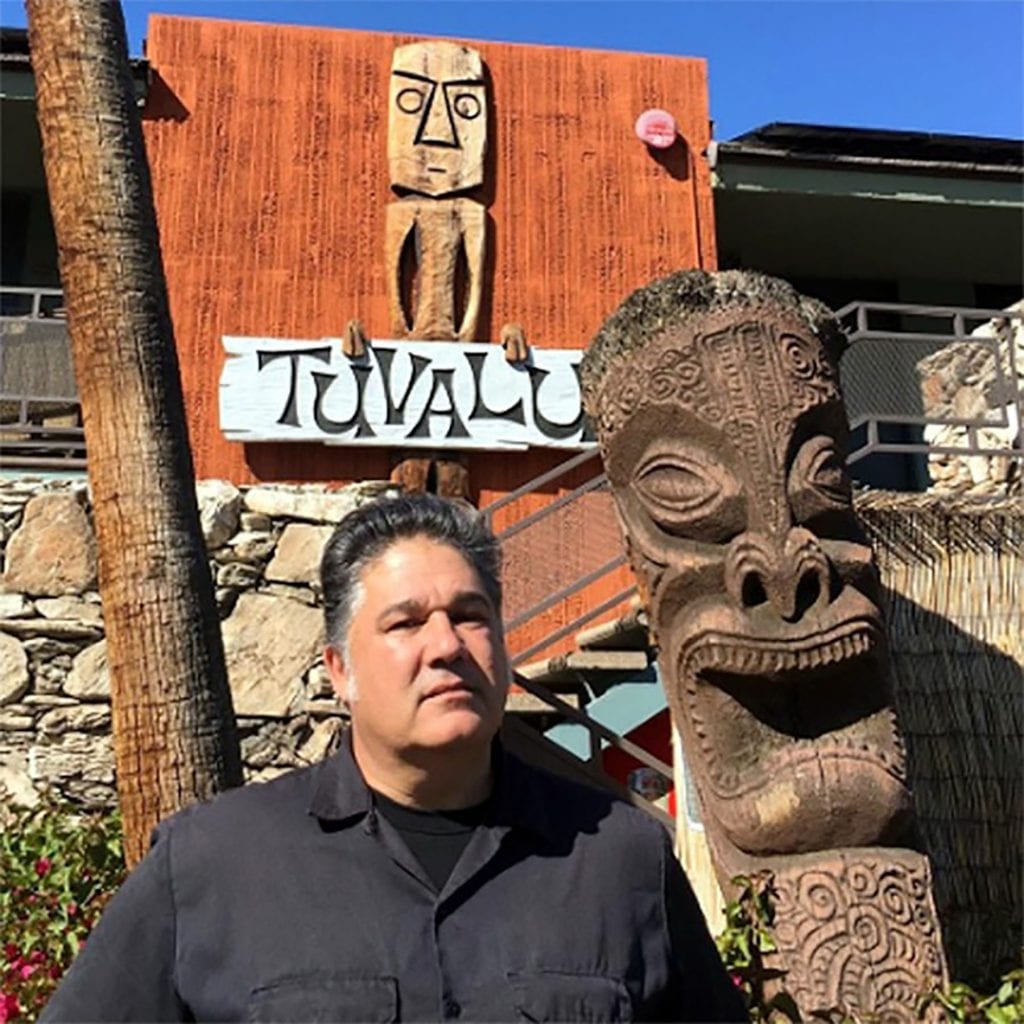 Bosko Hrnjak next to one of his sculptures. 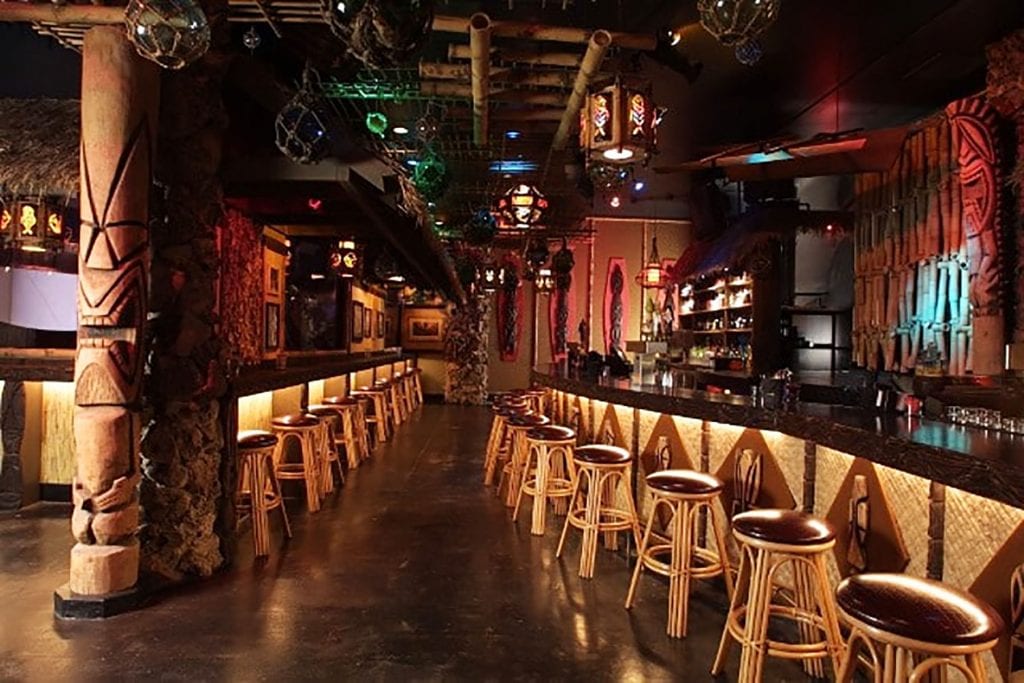 The interior of Taboo Cove, Las Vegas, the first commercial Tiki bar in North America since the 1970s. 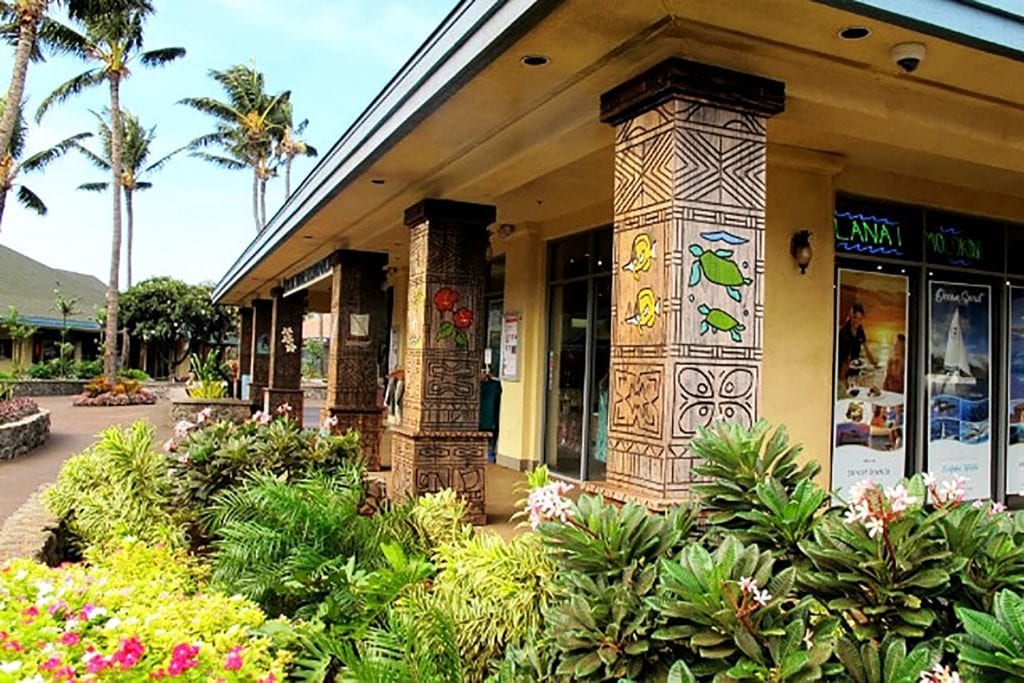 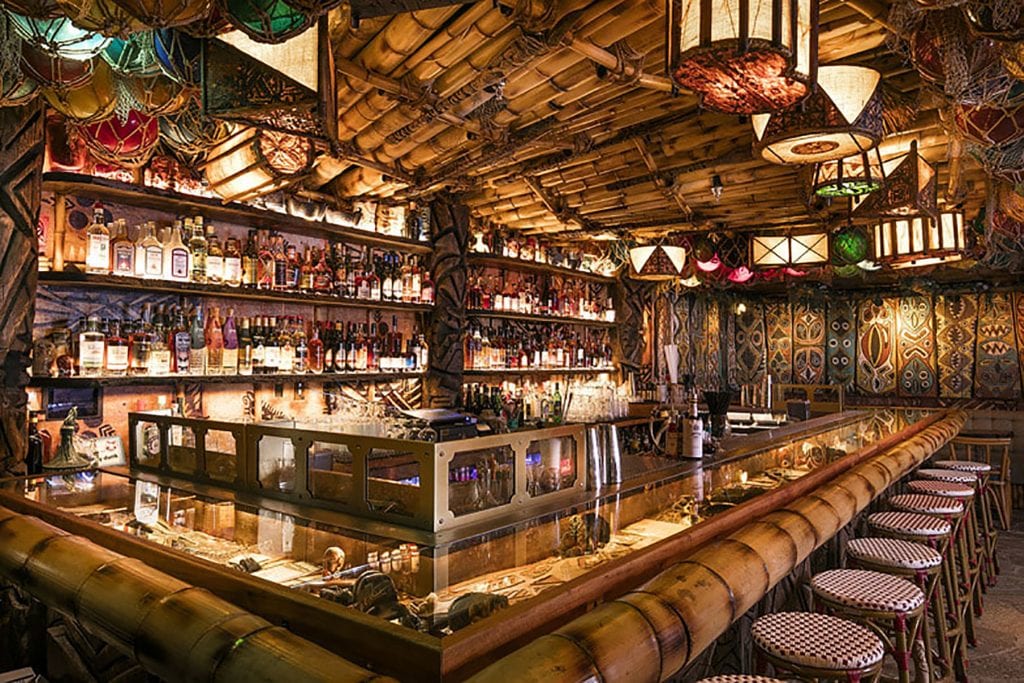 One response to “Film opens about Escondido man, Bosko Hrnjak and “Rebirth of Tiki””