Fencing finds a haven in Escondido 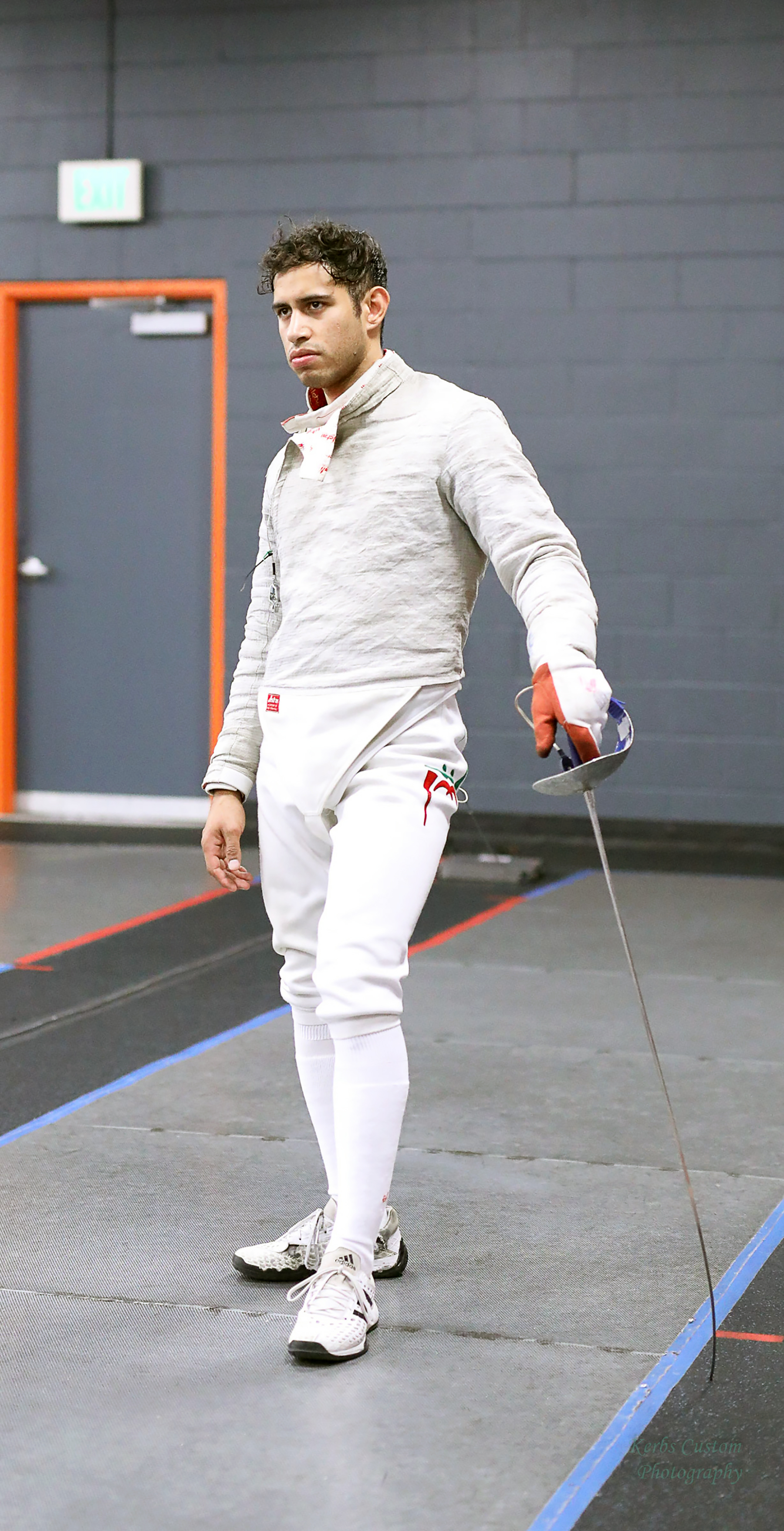 Taking a break from practice, a fencer strikes a traditional pose. 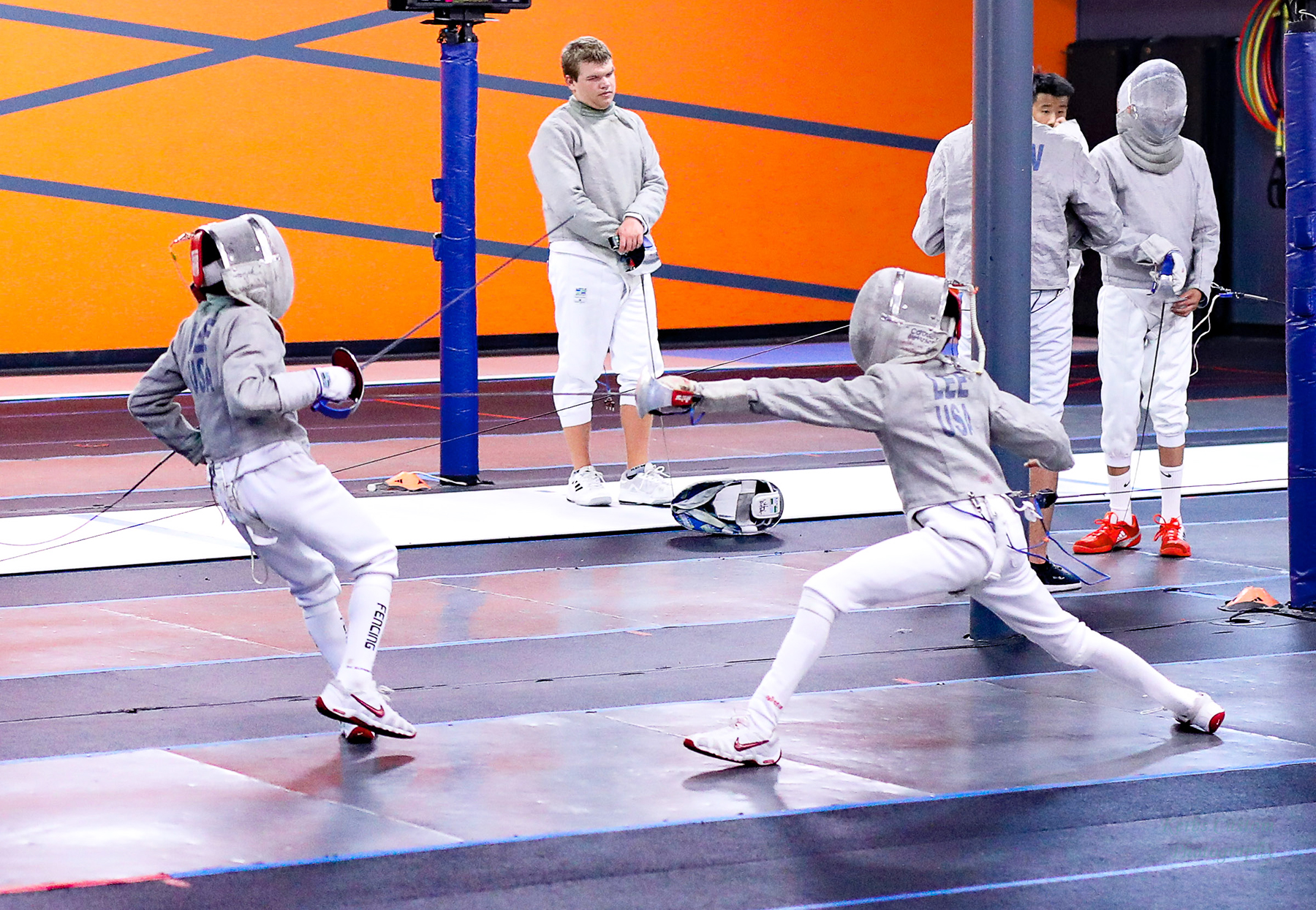 Conner Lee scores a hit against a practice opponent. 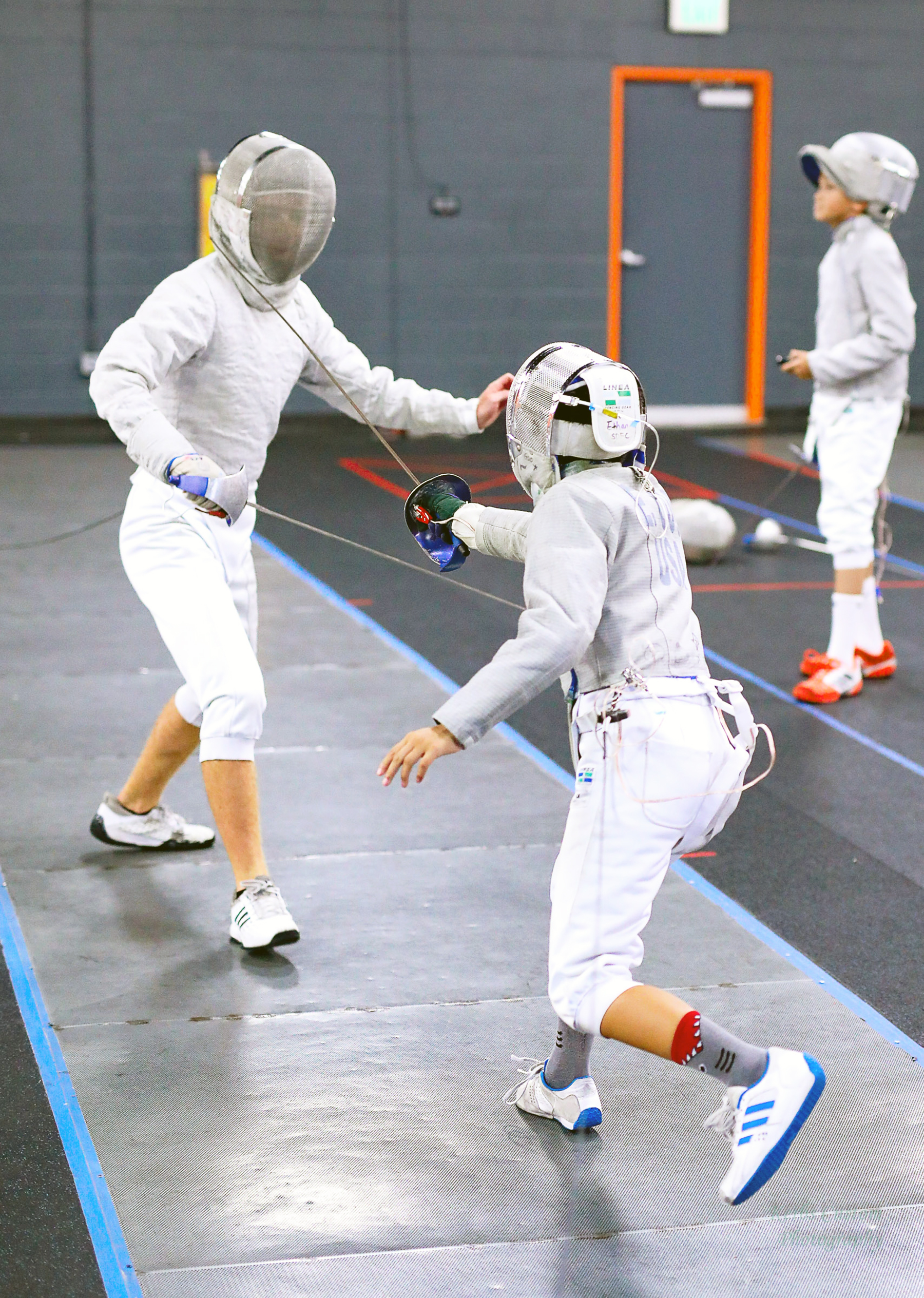 A pair of fencers square off on the strip. Photos by Lenny Kerbs, Kerbs Custom Photography

The origins of fencing go way back to days of yore when it was used as a form of combat or was employed in duels to settle disputes. It has long been associated with preserving one’s honor, acts of bravery and not backing down from a challenge.

Today, it has evolved into a fascinating individual sport that incorporates athleticism, acute dexterity, deft footwork and gritty determination.

And it probably would come as a real surprise to many to know that one of the best venues in all of California to learn the art of fencing and potentially develop into a top-tier talent can be found right here in Escondido.

Located in a 6,000 square foot building at 1770 South Escondido Blvd, the San Diego Fencing Center is a haven for all those who are drawn to this interesting pastime. Recently remodeled, the Center is spacious, air-conditioned, owns a high ceiling and features as many as six marked out strips for practice and bouts. Plus, it offers comfortable seating for both participants and onlookers. The Center is open Monday-Friday from 3:30 – 8 p.m. and on Saturday from 10 a.m. to 12:30 p.m.

The Fencing Center is the brainchild of Saul & Victoria Mendoza who, having moved south from the Bay Area, settled in the Escondido area. It was here that they purchased an empty lot and from the ground up, built the Center some 12 years ago. The facility also houses a separate business called the Fencing Post that can supply any and all needs as it relates to fencing equipment such as providing a foil, mask, jacket, gloves and chest protector.

But perhaps the most distinguishing aspect of the SDFC is the remarkable cadre of instructors available to share their vast storehouse of knowledge. Mendoza, who has been fencing since he was 12 years old, has extensive experience coaching on the international level including working with the USA national team. Then there is the accomplished Juan Ignacio Calderon from Spain, who has mentored and nurtured internationally known talent including his gifted son Diego. Moreover, Calderon is currently the head fencing coach at UCSD and is gratified to have Mendoza onboard as his able assistant with the Tritons

Another coach of repute is the revered Ramon Lorenzo-Acosta, who has worked with teams from both Mexico and Cuba. Rounding out this remarkable group of teachers is Aaron Villasenor, a gifted swordsman who recently competed in the Pan-American Games as a member of the Mexican national team.

Currently, the SDFC has a membership of approximately 100 with most of those ranging in age from 8 to 30 although there are a few members who are 50 years and up. It must be emphasized that the Center welcomes everyone regardless of age and gender and whether the participant’s intent is to make fencing a serious pursuit that will ultimately lead to taking part in competitions or merely to develop a new, unique and interesting recreational skill.

The proof that the SDFC is a great training ground for those aspiring to make significant headway in the sport is supported by the fact that it has turned out a number of fencers that have made their mark in national and international competitions as well as at the collegiate level at such high-profile schools as Stanford, Yale and UCSD.

There are three weapons that are incorporated in fencing – the foil, epeé and sabre. The foil is the smallest of the three and is generally the sword most newcomers start out with. The epeé has a bigger guard and a blade that is wider, thicker and heavier. Meanwhile, the sabre differs from its two counterparts in that the edge of its blade can be used in scoring, thereby making attacks extremely fast.

Mendoza explains that it’s all about finding out which of the weapons is best suited for each individual and then developing a comfort level from which enhanced technique and confidence will become natural byproducts.

When asked why he would recommend taking up fencing as a sport, particularly for youngsters, Mendoza is quick to answer. “The beauty of the fencing is that it tests both your physical skills and your mental toughness,” he says. “It’s also fun and then there’s the appeal of it being an individual sport where it’s all up to you.”

Getting a real cardiovascular workout, learning to make instantaneous decisions and becoming adept at remaining in control and gaining a mastery of one’s emotions are other benefits of this intriguing endeavor.

Because the SDFC is truly motivated to grow the sport and get as many kids involved as possible, it offers a highly affordable monthly fee as well as an absolute bargain of just $20 for a half-hour private lesson.

Organizing prominent local tournaments is also part of the Center’s mission such as an upcoming event to be held at the East Valley Community Center on September 14-16 that will have a field of anywhere from 500 to 600 participants. And in early December, the SDFC will be promoting an the even larger get-together down at the Town and Country Hotel in Mission Valley where it is expected that as many as 1,000 fencers from various age groups will compete. Look for 30 to 35 SDFC members to be raising their swords and joining the fray in each of these two competitions.

So a highly deserving touché must be extended to Mendoza and crew for creating and fostering such a fencing stronghold in Escondido. Through their passionate efforts numerous youngsters and many others have known the rush of being en guarde.