Felicita County Park is home to an amazing artists platform

“A Ship in the Woods” truly transforms Felicita Park 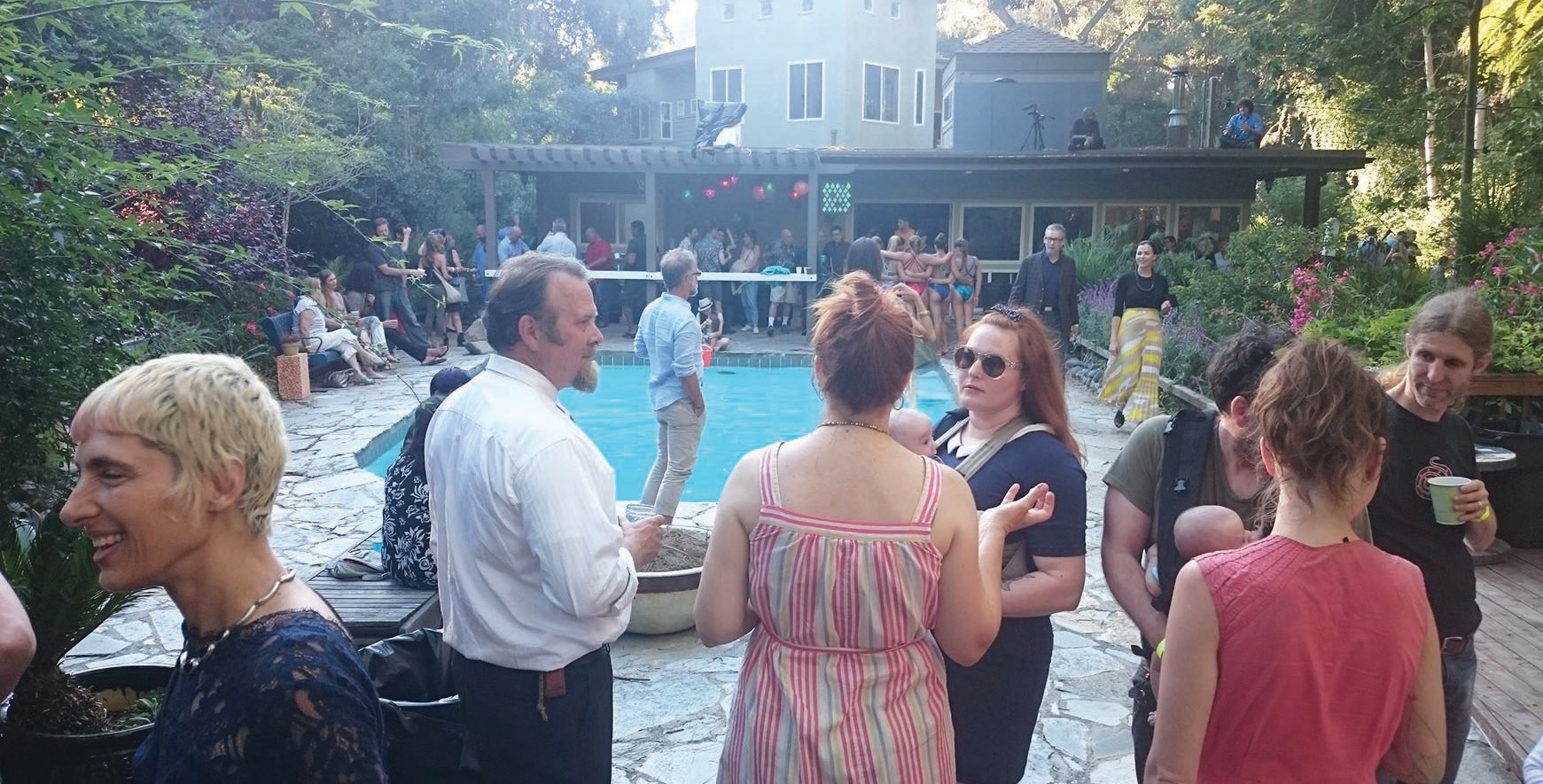 Poolside at the Felicita Grand Re-Opening.

Residing beside a 1,000-year-old stream in the heart of Escondido lies “A Ship in the Woods.” The foundation for creative exploration had a stunning grand re-opening for its new Felicita location on Saturday.

Formerly based out of Del Mar, the group focused on “cultural capital” has officially transformed their real life home in the county park into a play­house for artists and performers. The evening’s exhibits featured traditional mediums of art, installations, living in­stillations, live performance and inter­active pieces that truly manipulate the mind’s perception.

So many people took part in mak­ing this public event possible. Among them: co-founders Danny Fauchier and RJ Brooks; Co-executive Director and Chief Curator LeAnne Burdock; and Dr. John Reynolds, a member of the board and one of the neurological sci­entists working as scientific advisors for the foundation to research melding science and art into a cohesive process that continues to strongly serve the community and visually create a dia­logue that opens potential 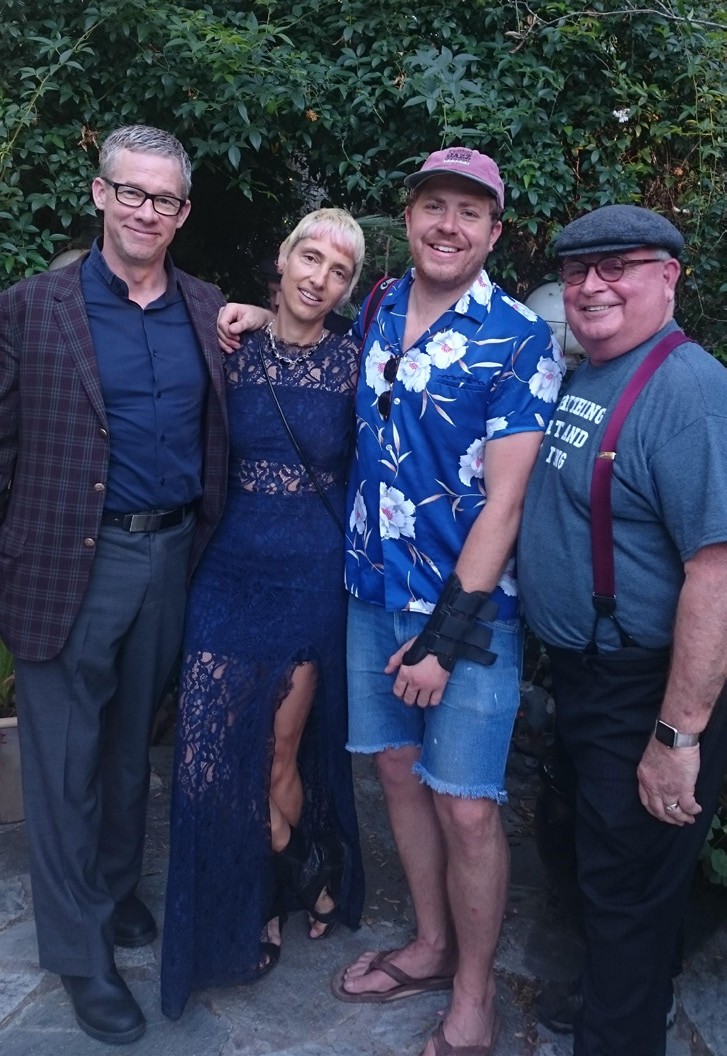 (From left) Dr. John Reynolds, LeAnne Burdock, RJ Brooks and Danny Fau­chier of “A Ship in the Woods.”

floodgates into the recesses of the mind.

A strong example of this is the foun­dation’s work with vision scientist Pat­rick Cavanagh, who worked with Dr. Reynolds to create the light and sound installation, RHODOPSIN, which has been featured in San Diego County in the past few years. The installation focuses on the mind’s perception and individual means for cohesive thought. Interacting with these performances and experiencing these exhibits is a very personal experience. Social con­structs are thrown out the window as your senses are challenged and you’re left with nothing more than your wits and inner reality.

More than 250 curious minds had encountered the walls of the Felicita house, with more than 400 other in­dividuals interested in the event. “A Ship in the Woods” has been hosting these events for five years in San Di­ego County and has continued to grow in popularity. They have made this woodland escape into a one-of-a-kind gallery space that utilizes every 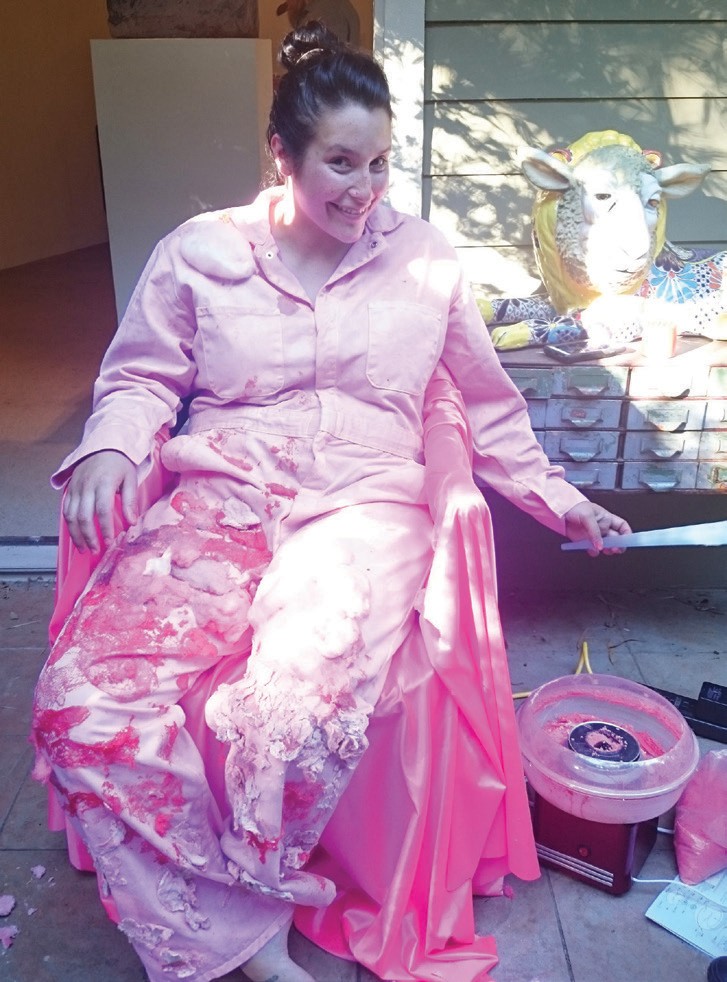 Lissa Corona covered in pink as she pa­tiently collects cotton candy to smother over herself, only to watch it crust, melt, and crumble into bits as it irritatingly continues to stick to her garments.

crevice for displaying art. Brooks and Fauch­ier are the owners of the private prop­erty and reside within the home, as they host residents who are working with the foundation to develop their perfor­mance work and artistic skills.

The foundation hopes to further ex­pand its outreach by offering educa­tional programming and establish an educational advisory board to combine art and science in far more extensive measures. “Connecting what is hap­pening inside a person,” said Fauchier. Performers from all over the world visit the residents; 60% of which are local.

“I named this piece Sweetness. The focus exists in rumination on the failure of desirability. When it’s fresh it’s very appetizing, but over time it starts to de­cay and becomes revealing,” said Lis­sa Corona, a visiting performer from Philadelphia who had covered herself in cotton candy and just let the sugary sweetness corrode over her being with aid of the humidity and heat that natu­rally existed outside along the back 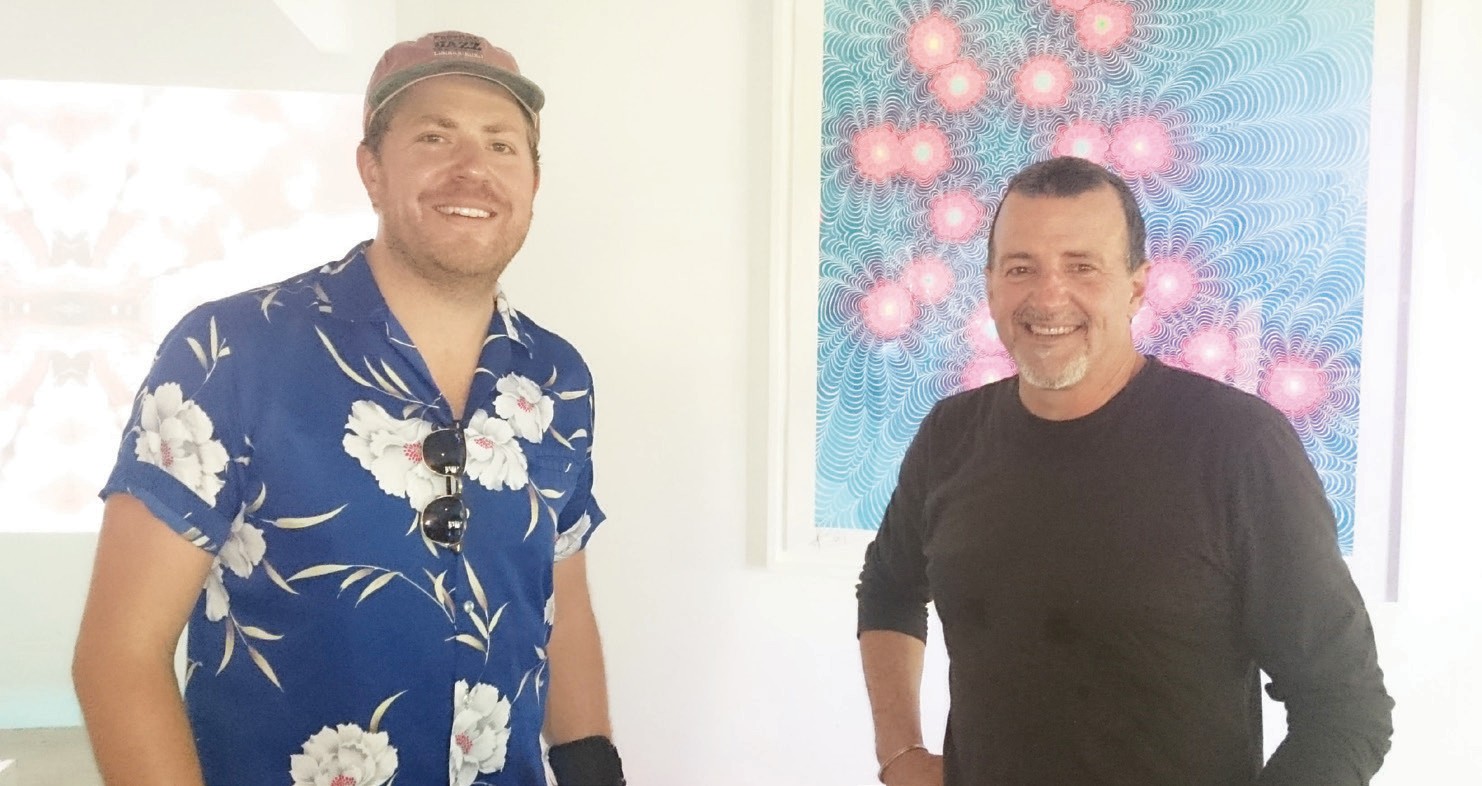 RJ Brooks, co-founder/executive director (left) and Drei Kiel, preparator and working support for the interactive exhibits, enjoying the success of the grand re-opening.

pa­tio of the home. She sat in her chair and covered her body with the billowy sugar until the sugar was all gone.

Sadly, this performance was only made available for one night only. Re­flecting on the “beauty of what first ap­pears attractive and desirable, and realiz­ing that over time that beauty is not what truly exists and the truth is the decay that occurs in time,” Corona concluded.

The Felicita performance has given the foundation a strong presence in Escondido and has paved the way for amazing growth in the near future. Grants have been submitted to further develop the property to include a sound room that will be accessible to visit­ing artists, as well as more expansive areas that can house instillation work like RHODOPSIN for performers in the future.

“I think it’s very important to note that we only do four shows in a year. Each of the shows really feels strongly about creating a dialogue,” 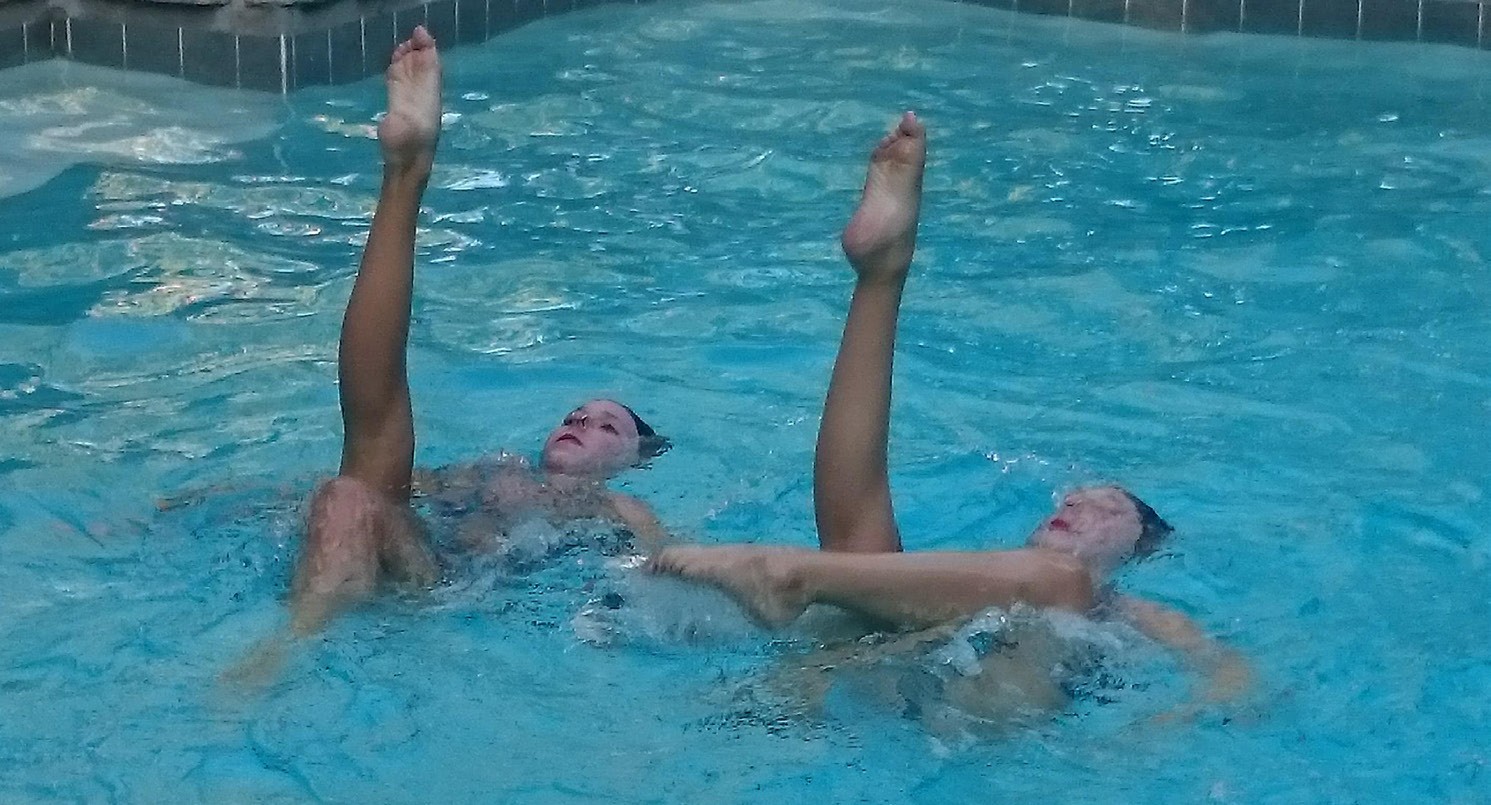 “We are very interested in having a place where people can engage with the art. They can start asking questions and looking at things a bit differently to where they see the world in a new light. We’d like to approach issues about sci­ence and psychology.”

She added, “This exhibit is about psychology. It talks about personal challenges and when you’re working towards a goal and the struggle to get there. Reaching that goal and the feel­ing of that ‘ah hah.’ You’ll see bears that are 8-feet tall that stream up, and you’ll sit in a room that’s a mist of red with a heartbeat. They really point out a dia­logue and emphasize the psychological implications of things,” “The audience can even be the art. Our table piece this evening is a good example of that.”

To learn more about “A Ship in the Woods” and to find out when their next performance will take place in Escondi­do, visit www.shipinthewoods.com/