Fat Ivor’s celebrates 10 years after rising from the ashes 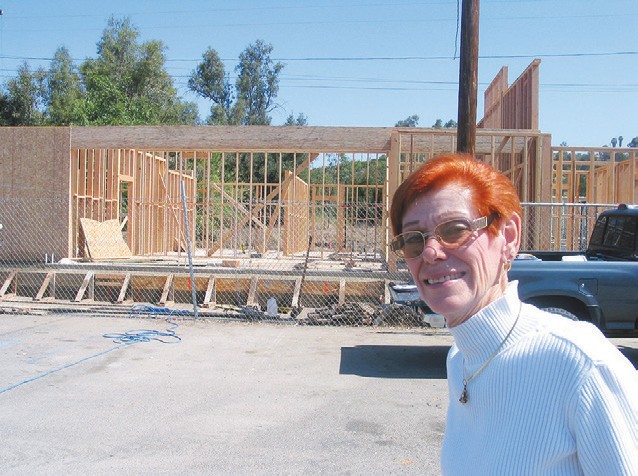 Georgine Thomas, owner of Fat Ivor’s, when the restaurant was being rebuilt after being destroyed in a fire in 2003.

On March 10 Fat Ivor’s Rib Rack will celebrate two anniversaries. The first is that for the 34 years Fat Ivor’s has been a landmark restaurant in town, serving up tasty treats to Valley Center residents.

The second is the anniversary of their reopening from the fire that shut it down in 2003. It took two years to rebuild the restaurant, but owner Georgine Thomas, widow of the late Tommy “Ivor” Thomas, after whom the restaurant is named, was greatly encouraged during that interval by people who told her that they were waiting for the restaurant to reopen.

One anonymous person posted a sign next to the burned out hulk that said, “Build it and we will come.” Mrs. Thomas kept her cooks and management on payroll during the two years the restaurant was being rebuilt.

A decade ago Mrs. Thomas commented, “We tried to bring the place back as close as it was and I think everyone has really appreciated that. So, nothing has changed. The food, the [atmosphere], everything is the same just like our customers asked.” Even the menu stayed the same.

Fat’s is offering dinner specials. See their ad on page 11.

Tommy Thomas died on December 25, 2002 at the age of 67. He served his country honorably for 21-years in the Marine Corps with tours of combat duty in Korea and Vietnam. He was a gregarious and generous friend to local children and people in need.