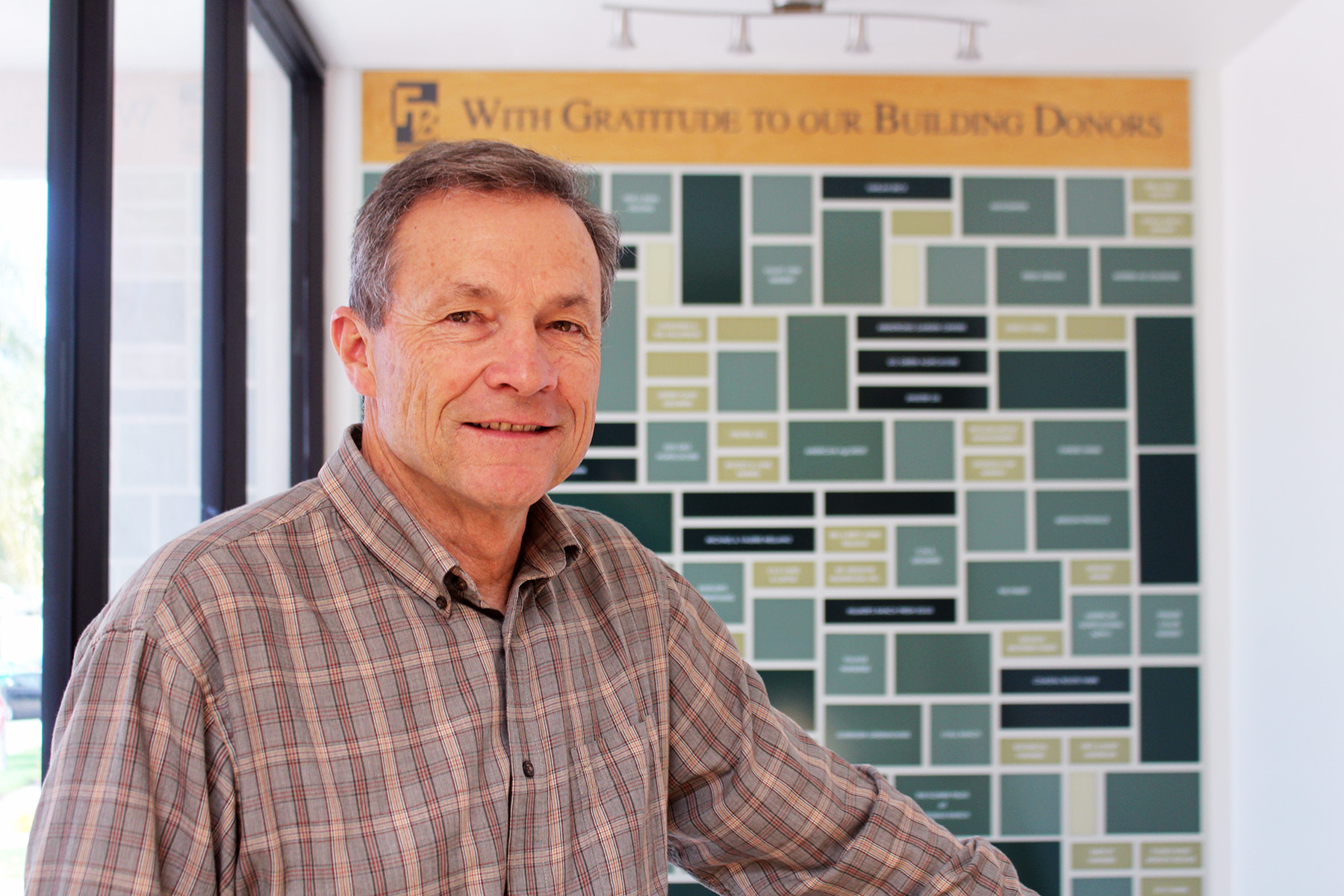 Farm Bureau Executive Director Eric Larson in front of the wall that recognizes the donors who made it possible for the bureau to move into its new building earlier this year from its old location of many years on East Valley Parkway.

The San Diego County Farm Bureau  passed its first century mark a few years ago, and looks remarkably young for its age these days, thanks to a new building that brings it well into the 21st century.

The Farm Bureau, which for years too many to remember was headquartered in a rather dark and seedy building in East Valley Parkway, recently moved to a spacious, airy and brightly lit two-story structure located at 420 South Broadway near the vibrant downtown area. It provides services for more than 2,000 dues paying members.

The move came after a fund-raising effort where many donors from the Farm Bureau contributed to help it add to the money made from the sale of its old property and leverage that into rehabilitating an existing building. They turned it into a modern office space with about twice the square footage of the old building—including a meeting room that can be considered the “heart of the farm bureau.”

The bureau owned the old building free and clear. Its sale, combined with fund-raising efforts led by Janet Kister of Sunlet Nursery in Fallbrook and Ken Altman, chairman of the building committee, resulted in the $2 million purchase and remodel.

The building houses the five fulltime and three part-time employees of the Farm Bureau. It also includes a large meeting room that is available for any ag-related meetings—plus several smaller meeting spaces.

I recently interviewed the longtime executive director of the bureau, Eric Larson, about the history of the Farm Bureau and its significance to today’s growers.

The San Diego County Farm Bureau was established in 1914 as a way to funnel information to the area’s growers. At that time the University of California was not allowed to provide information directly to farmers. So Farm Bureaus were created throughout the state in all of its counties. San Diego was one of the first counties to organize a farm bureau. Eventually the University of California created the cooperative extension to provide information directly to farmers, but by that time the Farm Bureaus were well-established and providing a useful function. So the two organizations flourished side by side.

“The mission of the San Diego County Farm Bureau is to foster San Diego agriculture through education, public relations, and public policy advocacy in order to promote the economic viability, sustainability, and community building of agriculture,” says the bureau’s website.

The Farm Bureau provides support for farmers. “People lament that we lose small farmers but one reason is because of the need to be in compliance with all of the state regulations,” said Larson. “You need economy of scale.” You also need to be as efficient as possible to deal with the central challenge facing farmers: the ever increasing price of water.

“We live in an urban county where the number one issue is water,” says Larson. That’s why he’s very enthusiastic about Escondido’s plans to process sewage effluent from other cities and use it on local agriculture, saving farmers millions of dollars over time. “I think it’s an excellent thing,” he said.

The program takes advantage of the fact that the city’s ability to send effluent to the ocean is maxed out. “They needed to either build a new outfall for one billion dollars and instead they said, ‘What if we take our recycled water and run it through a pipeline to a MFRO  (Membrane Filtration/Reverse Osmosis ) filtration plant that will remove the salts that hurt trees?”

The city of Escondido in 2015 made the decision to build an MFRO facility to treat tertiary effluent from the existing Hale Avenue Resource Recovery Facility (HARRF.)

“This makes water more affordable and drought free because people still flush no matter if there is a drought or not,” said Larson. “It’s going to be a very affordable win-win. The city doesn’t have to build outfall and farmers get cheap water. In San Diego County it makes no sense to dump any sewage in the ocean.”

This is a message he would like to spread to the rest of the county, but that will be easier to do once the Escondido HARRF plant is built. That has been postponed several times because each time the city found a place to build it, the surrounding neighbors created an uproar so that it was relocated.

Finally, on April 3, the city council approved of the initial design budget of about $3 million for what ultimately will cost the City of Escondido an estimated $47 million. The final location agreed to for the HARFF is city-owned property at 901 W. Washington Avenue, which is industrially zoned and bordered by industrial parcels on the east, south and west.

“That should take care of most of our farmers,” said Larson. “It is designed to be extended.”

The second most important issue facing agriculture in San Diego County is the significant labor shortage—an issue that is not particular to San Diego, and which impacts most of the rest of the country.

Larson noted that because of the ag labor shortage significantly fewer acres of strawberries were planted this year. Growers didn’t want to make the investment without knowing there would be enough workers to pick the fruit.

Since this is a high tech age, what about robots to pick fruit? Robots are best at picking fruit that will later be processed, says Larson. Fruit such as avocados and citrus need the decision-making ability of a person to know when to pick the fruit. “Even if you raise wages,” Americans are generally not interested in working the fields, he said. “We have to make a choice. Do we want our food grown here or in other countries where the workers live? We decided we didn’t want to be dependent on foreign oil. Will we decide not to be dependent on foreign produce?”

The paralysis in Congress is apparent, says Larson. Neither party is willing to address an issue that has become too dangerous to touch. “We think it makes sense to give workers the ability to cross the border both ways,” he said. “Now they sneak across the border and they are trapped on this side. Our national policy doesn’t make sense. Wouldn’t you rather know who the aliens are that are here? Wouldn’t it be better to track them?”

Yet as a group, he says, Congress is paralyzed. “En masse, they can’t seem to make that happen. They are running in fear. We think it makes sense to have a reasonable guest worker program,” said Larson.

Such factors accounts for the fact that 80% of the avocados we eat come from Mexico, even though San Diego County is known for growing the green knobby fruit. There’s even a highway near here named the Avocado Highway.  “We don’t have the workers to supply the country with avocados,” said Larson. So this year’s local avocado crop is a small one. Which is too bad for farmers, given that the price of avocados of $1.25 a pound is very attractive right now. 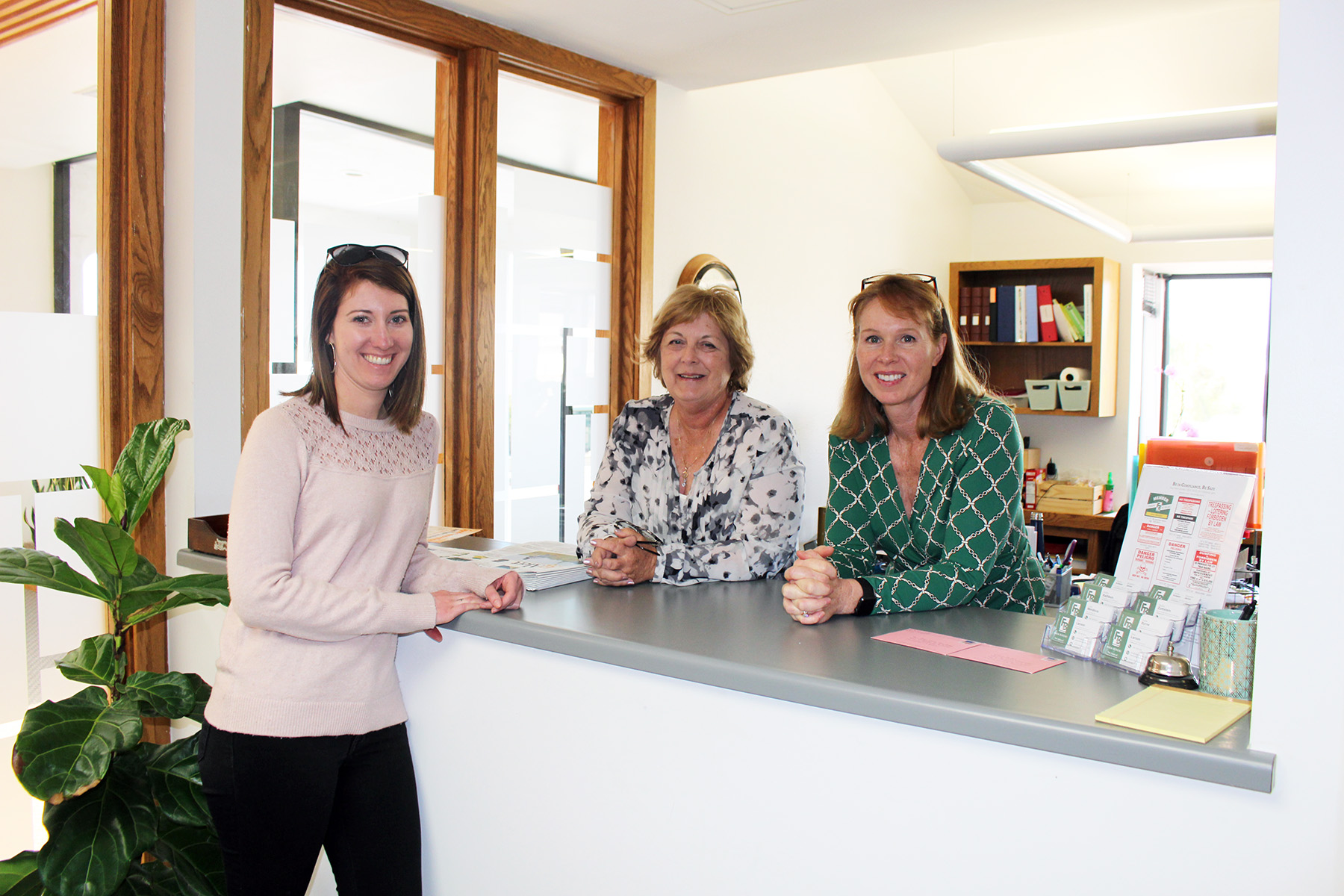 Regulation compliance— the costs associated with meeting all of the regulations involved in being a grower—is the No. 3 issue. “It takes a lot of effort to be a farmer,” says Larson, and that is effort not involved with actually growing food. “We all believe in protecting our air and water but there is a time-element—a burden they didn’t use to bear.”

A recent addition to that burden is the requirement that farm workers be paid overtime if they work more than 40 hours a week. “Agriculture is very seasonal,” says  Larson, and is characterized by seasons when a lot of work is required for short spurts of long hours. “You don’t have the same workload every time of year. During harvest season you work the longest.” When the regulations from Sacramento treat farm workers like every other worker, “they essentially cut farm workers’ pay,” he says. “because each worker is given fewer hours to avoid paying overtime.”

Larson attributes this blind-eye to the realities of the farm business to an increasingly urbanized legislature. “They are not farmers,” he says. “They don’t know to farm but they want to tell farmers how to farm.”

Ever heard of the shot hole borer? No, it’s not a tedious golfer who hangs out on the links distracting players, but an invasive boring beetle that makes life harder by drilling into tree trunks and branches.

Like most bugs that damage crops and sometimes put entire communities under crop quarantine, the shot hole borer, and the Asian citrus psyillid, which carries Huanglongbing that destroys fruit like something out a horror film, didn’t just “show up.”

Farmers don’t bring them into the country or the county. “The traveling public does,” says Larson. “Then the farmers have to deal with the bugs. We kill with pesticides, but then the public says, ‘Don’t use pesticides!’ But the public brought them here in the first place.”

One of the positives for agriculture in San Diego is the rise of agritourism, characterized by tourists who visit attractions such as Bates Nut Farm in Valley Center, or the Flower Fields in Carlsbad, or the proliferation of wineries throughout the county.

“The advantage is that the tourists are already here,” says Larson. The challenge is to make something like an avocado ranch interesting to tourists, when some agricultural operations simply can’t allow the public to enter because it can contaminate their fruit.

In fact, most farmers cannot have dogs on their farms due to the risk of the dogs tracking in unwanted contamination. If an errant raccoon or other critter trespasses on a farm the owner is required to take action. “We have safe food in this state, but we want to make it perfect,” said Larson. In this case, it seems, the perfect becomes the enemy of the good.

“If you allow tourists to come in, you are making it into a retail operation,” says Larson. But that can be attractive for some operators, especially wineries, where tourists don’t actually need to tread amongst the grape vines. “The Board of Supervisors have made it easier to have agritourism on the farm by right, and allowing food trucks on farms,” he said.

In the production of eggs the state is moving toward free range. “All the laws are in place,” said Larson. To prevent local farmers from having to compete against out-of-state eggs that are not produced under similar rules, such eggs cannot be brought into California. “California egg farmers don’t mind operating under the rules as long as everyone does,” he said.

My visit to the Farm Bureau included dropping by the large meeting room that was created so that the board of directors, which has 47 directors, would have plenty of elbow room to meet, and there would be plenty of room for an audience.

“We want this to become the ag hub of the county,” said Larson and the nickname of the space is “Aghub Office.” “We knew we needed more room and that was one reason we wanted to move,” said Larson.  “Any farm organization can use it for free, as long as the purpose is farm related. We don’t care if it’s related to the Farm Bureau or not.”

Growers from as far away as Borrego Springs have come to Escondido to use the space. 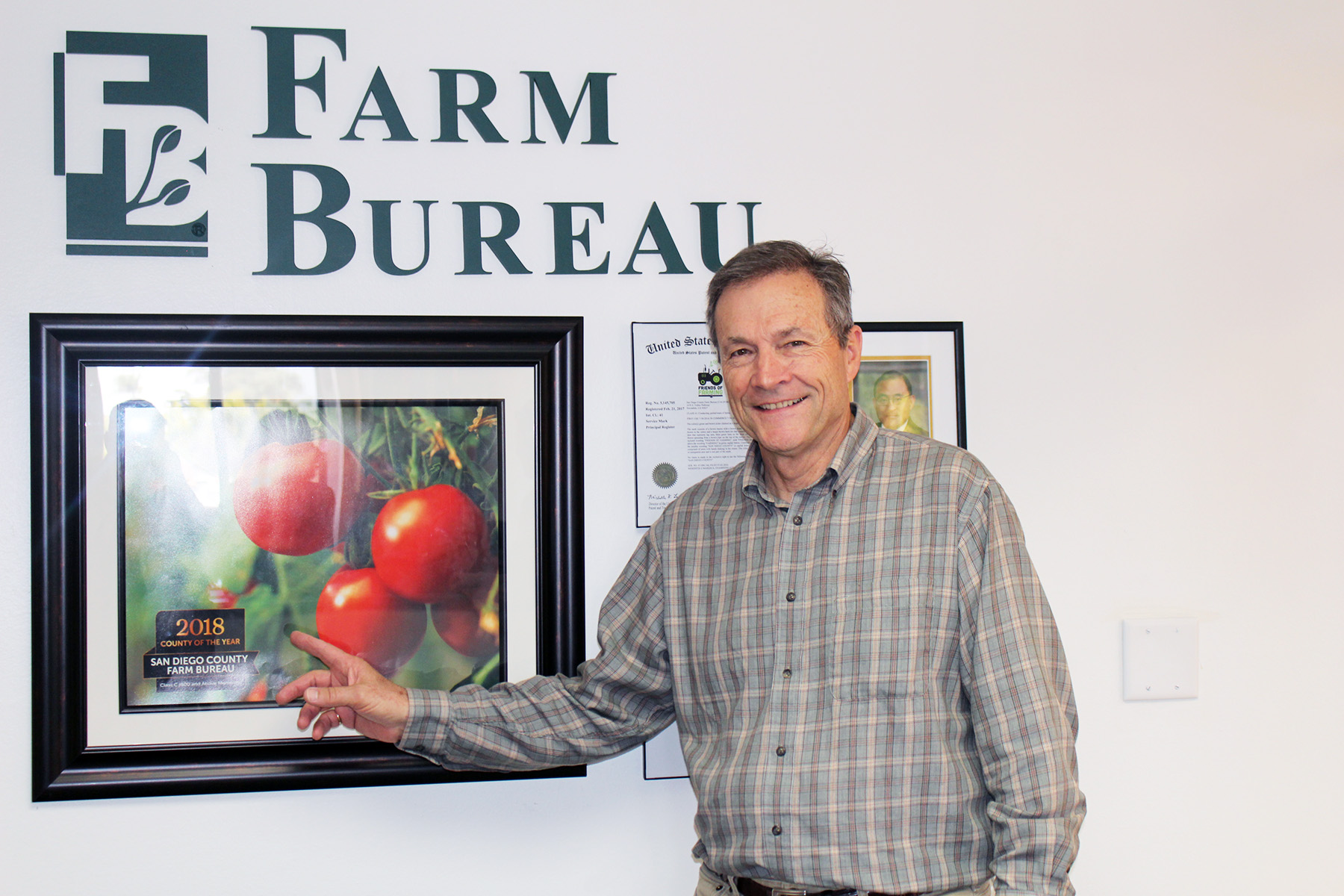