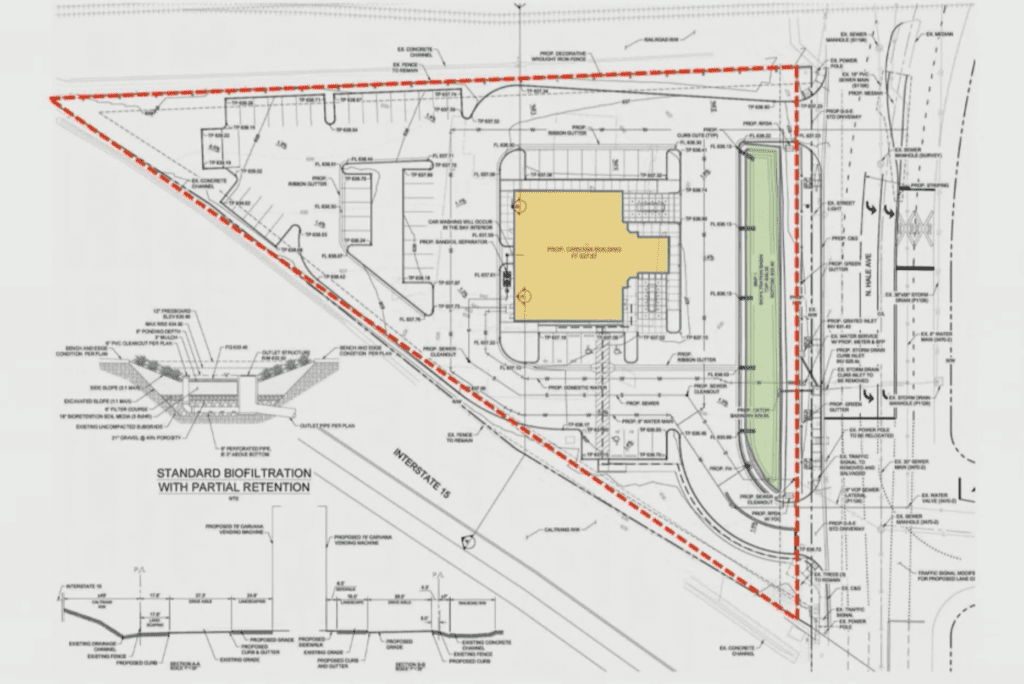 A burnt out eyesore in the industrial section of the city is to be transformed into an automobile vending machine with a visually striking iconic tower. At their September 24 meeting city council members enthusiastically made the zoning changes that will allow Carvana to bring the first of their “vending machine” automobile dealerships to San Diego County.

The zoning change was approved for the triangular 1.85 acre property at 559 N. Hale Ave., which previously was occupied for many years by the Talone Meats/North County Packing Company. A fire destroyed the building in 2016.

The building will be a 5,800 square foot, eight tier glass and steel tower structure 75 feet tall. The project will include a redesign of the street frontage that will widen N. Hale Avenue to accommodate two southbound left-turn pocket lanes onto Tulip Street. The developer would also pay to restripe 400 feet of roadway, reconstruct the existing median along N. Hale Avenue, add two driveways and a new sidewalk.

The building will store four cars per level, for a total of 32 cars. It is loaded when customers are scheduled to come pick up the cars. Sales are done by appointment only—it will not be open to the general public to look at cars. It will be very visible from I-15.

When completed, the Carvana dealership will have 20 employees. Carvana estimates that the first year of sales will be more than $25 million. It expects to pay the city about $11 million in sales taxes over a decade.

The Planning Commission on September 8 approved of the project by a vote of 4-2. The dissenting commissioners didn’t support the prominent building design and lighting.

The tower would use “solar control” glass, which allows in sunlight but not heat. Its transparent qualities would showcase the cars stored in the tower. The special glass resists reflecting sunlight to prevent creating glare for motorists along Interstate-15. The vehicle lifts would contain accent lighting and colored LED lighting will illuminate the interior of the tower.

Carvana is known for “touchless” car sales. It maintains an inventory of more than 20,000 vehicles. The “vending machine” structure employs an automated storage and retrieval system to move vehicles in and out of the tower. The tower allows vehicles to be stacked temporarily (four vehicles per tier) in a vertical configuration until they are retrieved for the customer. 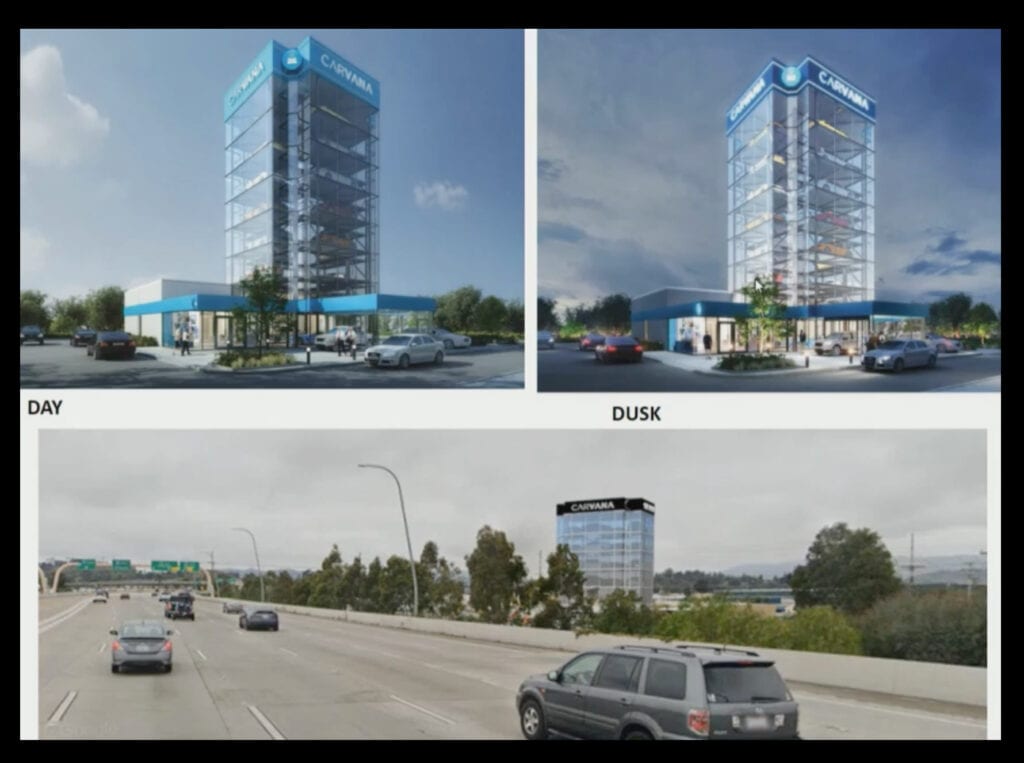 According to the staff report, “Vehicles are picked up from Carvana by appointment only, or can be delivered directly to the customer. The facility does not provide parts or services on site, fuel pumps or sales representatives.”

As mentioned earlier, two planning commissioners had dissented with the majority because they opposed the increased signage on the side of the building, which would total 325 square feet.  According to the staff report: “Staff feels the proposed signage would be appropriate for this specific development given the increased signage allowed for the Escondido Auto Park related uses west of Interstate-15, the off-site Auto Park freeway oriented digital sign, and other signage allowance for the auto dealerships along Interstate-15 south of Ninth Avenue.”

The project qualified for an exemption from CEQA (California Environmental Quality Act) requirements because it is an “in-fill development project” and does not have a significant effect on the environment.

Jo Ryan, senior project manager gave a short presentation in which she said that Carvana would be opening its first vending machine dealership in San Diego, and in fact the third in California. “Our goal is to change the way people buy cars, to provide an alternative.” She added, “Even during the pandemic, our business model has proven to be successful.”

Customers go online to buy new and used cars. They can do touchless one day delivery if they choose.

Bret Sassenberg, also of Carvana, explained that eventually the dealership will open to the public, “once Covid is in the rear view mirror.”

Sassenberg talked about how Carvana had been “looking for a location for a very long time,” and that the dealership would be “the highest and best use since it has remained vacant for four years.” Sassenberg added, “It’s  a bit of an eyesore. A triangle, which is hard to sell. Redeveloping would require $500,000 to improve Hale. Turning a problematic site into a big asset for the city.”

Council member Mike Morasco commented that the only other project “even hinted at for that site was another storage unit. “As far as getting the maximum usage out of that lot, this project does that,” he said. “It is a tremendous eyesore. It would become an icon. I think it will be very pleasing to the eye and will be a nice business addition to the city of Escondido.”

Council member Olga Diaz called the building plans, “a beautiful design. It’ll be something to look at and interesting to drive by. If your model ever changes I don’t know what you do with that building.” She added, “The site is in desperate need for attention, and this gives a little pizzaz and bling to the area.” She said that she “might try it out myself when the time comes.”

Mayor Paul McNamara quipped, “I can’t get the image out of my mind of someone coming with bags and bags of quarters to buy a car!”

The vote in favor of the project was 4-0. 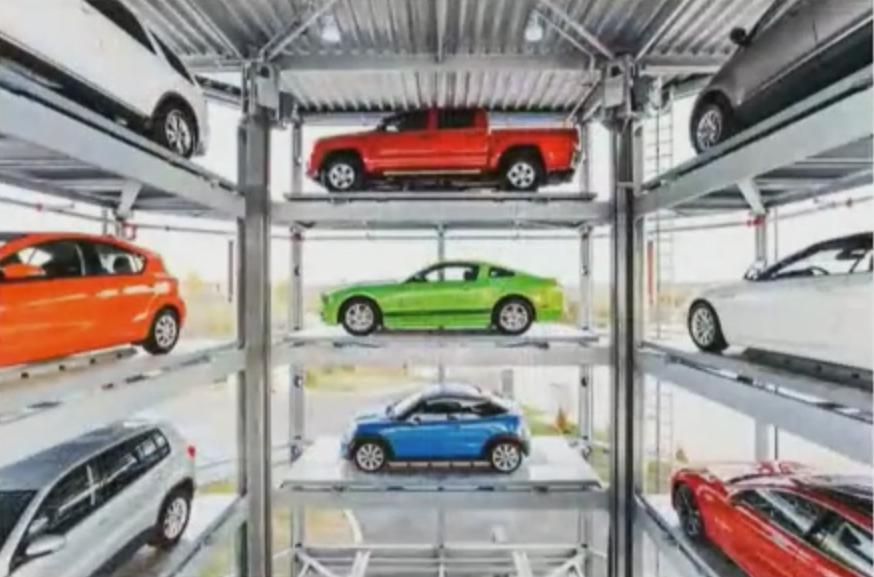 Public Works is working on two lighting projects at Jesmond Dene Park. The first phase of the lighting project involves upgrading the existing ballfield lamps with LED fixtures on all three (3) ballfields. The second phase, which will be brought to Council at a later date, includes installing four LED parking lot lights to illuminate the upper and lower parking lots at the park along Broadway Avenue.

The existing lights were installed in 1980.  According to the staff report, the LED lights will cost about 40% less in power costs and save a lot of money in maintenance because bulbs won’t need to be replaced as often.

Council member Morasco asked if the city has explored contracting this job out. “We have looked at contract sweeping,” said Goulart. “It is very expensive and less expensive to do in house with staff.”

He added that the sweepers, “are very expensive units and they last about five years.”These purchases were part of scheduled replacements and the money comes from the Fleet Services ‘Vehicle Replacement Fund.’

3 responses to “Eyesore to become icon; Carvana comes to town”