Expected to dominate, the Sabers come through big-time 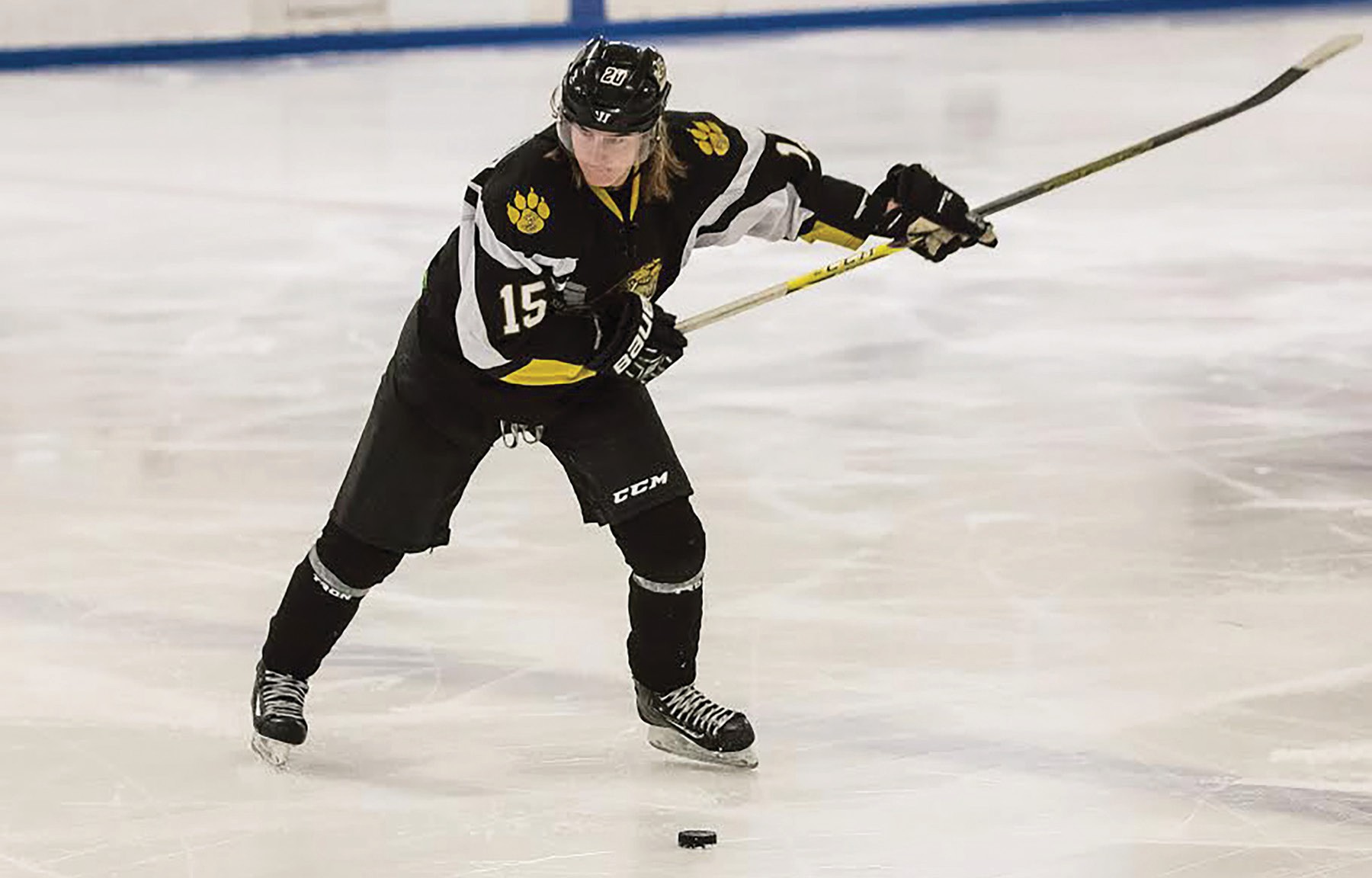 Entering their weekend, three-game series at the Iceoplex with the visiting Arizona Hawks, the San Diego Sabers were prohibitive favorites to not only sweep but to do so in a dominating fashion.

Needless to say, San Diego took care of business and did exactly what was expected of it. Yielding only a single goal while finding the net 18 times themselves, the Sabers rolled to decisive 7-0, 5-1 and 6-0 victories that proved that the home club wasn’t about to take the Hawks for granted despite Arizona’s epically poor record.

With these anticipated but nonetheless key wins, the Sabers extended their current winning streak to six in a row, improved their overall record to 19-14- 2, evened their home ledger at 9-9 and moved into a fourth-place tie (40 points) with the Las Vegas Storm in the eight-team Western Division of the Western States Hockey League.

But pity poor Arizona. With the Sabers putting yet another big-time hurt on them, the Hawks remained winless on the road (0-16-0) while their overall mark descended into depths rarely reached at a stunningly bad 1-36-1. These guys must be mighty proficient at limbo because it seems as if they’re destined to discover just how low can they go.

The Sabers jumped on the reeling Hawks right from the start, scoring four goals in the first period on Friday night that clearly set the tone for the remainder of the series. In that eventual 7-0 conquest, deluxe defenseman Oskar Johansson had a huge outing, scoring twice while tacking on a pair of assists. Forwards Philip Larsson and Emanuel Guidon also contributed mightily to the offense with each registering a goal and an assist. Though it wasn’t a particularly busy night for goaltender Alexander Johansson, he was steady and reliable, stopping all 15 shots directed his way while posting the shutout.

There was no letup in the Sabers the following night either as they continued to exert their will over an outclassed opponent en route to a 5-1 triumph. Goalie Zach Hale did his part with 14 saves while talented defenseman Mattias Eklund and active 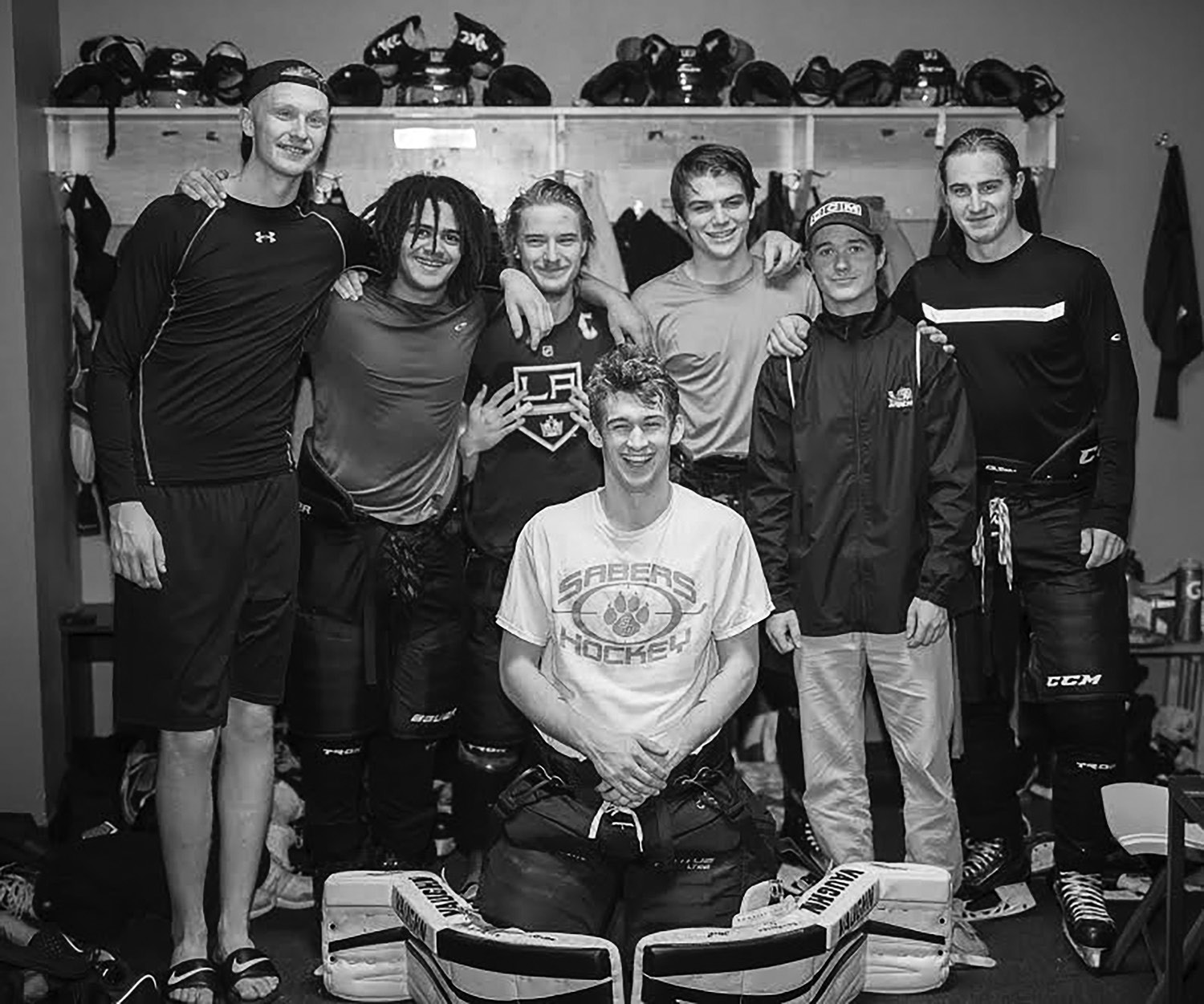 forwards Kevin Dumont and Clifford Johnson provided the necessary firepower as each dented the net and chipped in with a helper.

So having wrung up the first two games of the series and based upon their superiority up to that point, the only question was would the Sabers get a bit complacent and perhaps take their foot off the pedal? Alas, for the beleaguered Hawks, there was to be no respite or reprieve. Indicative of their want-to and hustling style, the Sabers showed absolutely no inclination to throttle back on Sunday afternoon as they continued to pour it on while adding to the Hawks’ misery thanks to a no-doubt 6-0 whitewash.

The sweep was all but assured in the finale’s initial period. After Hale had made a pair of solid saves on a wrister and slap shot, the Saber offense ultimately shook loose. Guidon, who was flying around the ice all game long, spied teammate Steven Jackson coming open and delivered a spot-on pass. Jackson wasted no time in unloading a slapper that caromed off the right post and beat Hawk goalie Reiker Edstrom at the 10:11 mark. The inevitable victory had now been set in motion.

And then late in the period, San Diego expanded its lead to 2-0. Johnson, who is exceedingly stingy when possessing the puck, circled to his left before noticing that Johansson, having moved in from the blue line, had set up inside the circle. Taking a timely feed from his teammate, the gifted defenseman quickly pulled the trigger and cleanly bested Edstrom on the left side. For the goal-starved Hawks, who had scored only 45 in their previous 37 games, that deficit must have seemed insurmountable.

The hosts would add to their margin in the second period on a noteworthy individual effort by captain Keegan O’Brien. Carrying the disc across the blue line, O’Brien showed savvy and patience as he waited until Hawk Sebastian Llaneras screened his goalie before letting fly. Unable to sight O’Brien’s shot that was expertly ticketed for the upper-right corner, netminder Edstrom had no chance as the puck whizzed by 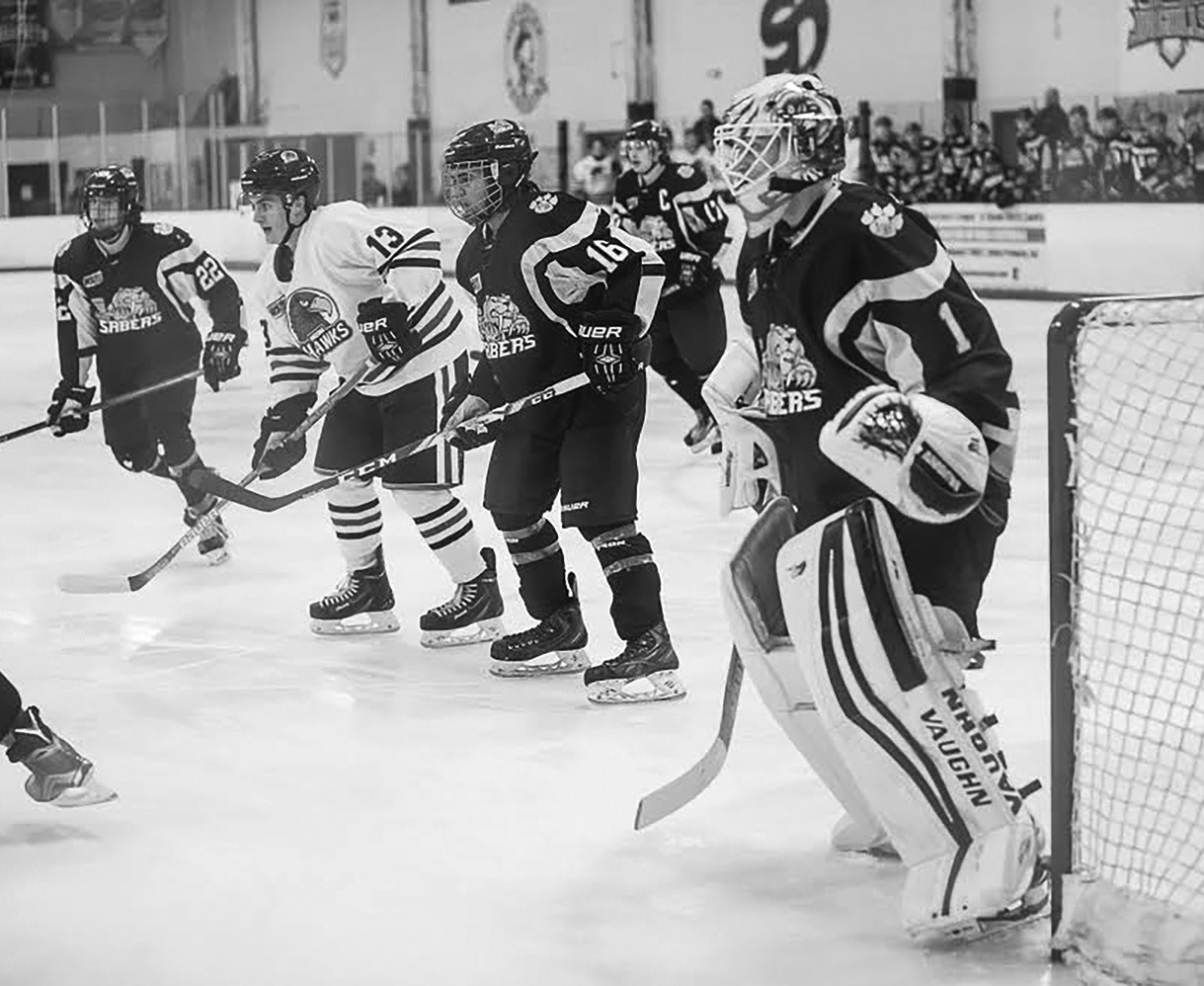 him. At 3-0, this contest was already in the barn but the relentless Sabers were far from done.

San Diego coach Joakim Falt has done a masterful job of eliciting great effort from his club all season long and instilling in them the desire to keep pushing hard no matter what the score. So it was not surprising in the least that the Sabers kept bringing it in the third period. “We told ourselves that we can’t let up,” said the coach of their approach towards the last twenty minutes. “We had made it a goal that we wanted to get six scores.” Remarkably, that’s exactly the number that they were to put up.

Sent off on a partial breakaway, Johnson made no mistake as he rifled one past Edstrom that expanded the margin to 4-0 less than a minute into the period. Shortly thereafter, it was the aggressive Johansson who was at it again as he blasted a low line drive that found an open left side. Finally, the capper came when the well-positioned and physical Greg Houle pounced on the rebound of a blistering shot from defenseman Liam Richie and slipped it home. That brought the final tally to 6-0 and put an exclamation mark to the Sabers’ dominance they had exhibited throughout the weekend.

Though their offense was very much in evidence having generated a staggering 56 shots on goal, the Saber defense was also a mighty force. Blueliners Johansson, Eklund, Terrell Hood, Cole Parker, Richie and Jackson smothered the Hawk attack to such an extent that the home team was able control the puck and the play for a lion’s share of the game. This was a superb lockdown effort as Hale was asked to make just a meager 12 stops.

As he had been on Friday night, Johansson was also the Sunday headliner. Not only was he a continual scoring threat but he was a puck handling wizard and a stout defender. When asked to elaborate on his game, Oskar revealed his assertive mindset. “Because I’m good on my skates, I feel comfortable coming 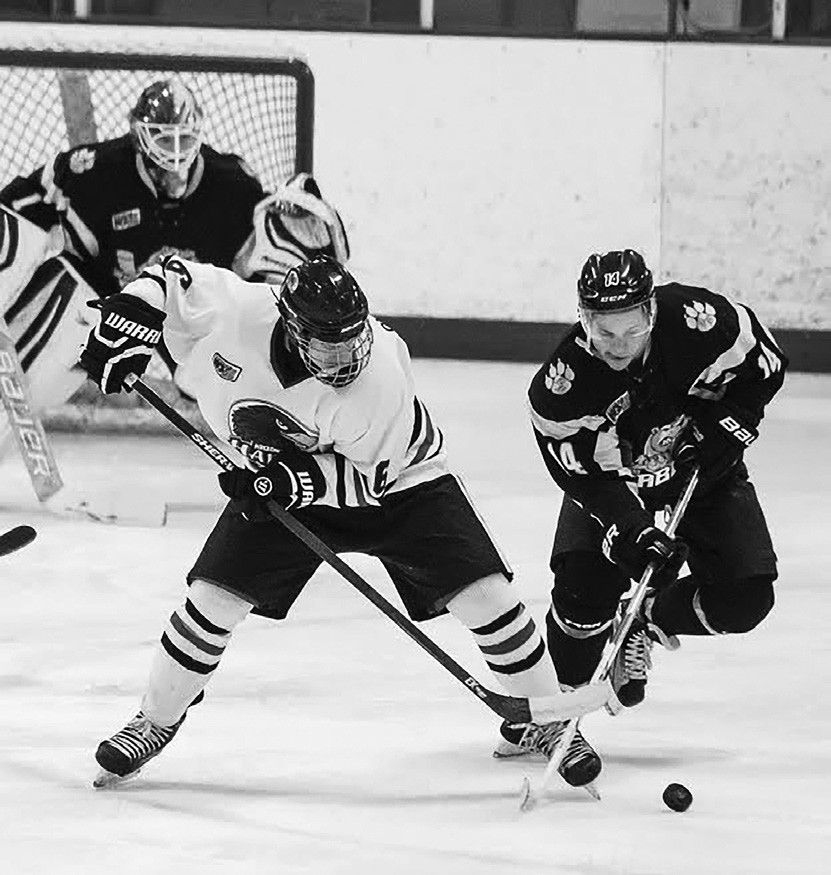 Forward Emanuel Guidon, who tallied a pair of assists on Sunday, works hard to dig out the puck from a Hawk defender.

up in the offensive zone and trying to make plays” he shared. “And I think I’ve got a pretty good shot.” Ya think?

Though Johansson merited plenty of praise, a number of his teammates were also deserving of kudos. Jackson was a huge contributor as he constantly hunted his shot and put Edstrom to the test on numerous occasions.

Goalie Hale didn’t exactly confront a withering onslaught from the Hawks but he nonetheless turned aside all that was directed at him while posting the shutout.

And forwards Guidon and Johnson were outstanding as they showcased plenty of jump to their step, were strong while controlling the puck and loomed as real threats with both their deft passing and shot attempts.

One more observation must be made about Sunday’s game. To their credit and despite their abysmal record, the Hawks gave legitimate effort and never showed any sign of wanting to pack it in or not compete. They may be challenged personnel wise but their hearts, at least on this occasion, didn’t failed them. They battled right down to the final horn.

And a special shout out must go their game goalie Edstrom who must have felt as if he were in the midst of a shooting gallery. Edstrom saw so much rubber he needed to be vulcanized but he hung tough, refused to quit and made a passel of standout saves. By the time his work was done, he had totaled a stunning 50 saves and earned for himself the respect of everyone who had witnessed his gallant performance.

Obviously the Sabers have shown that they can tame any team from the state of Arizona, having produced back-to-back weekend sweeps of the both the Phoenix Knights and now the Hawks. But the pressure is on to maintain their winning ways in order to remain in the upper half of a competitive Western Division. Next up for San Diego is a three-game set versus the Ontario Avalanche beginning Friday night at the Iceoplex.

The Sabers proved that they can pound a less talented foe. Moving forward, they’ll hopefully prove that they can do a lot more than that!