One restaurant owner explains why 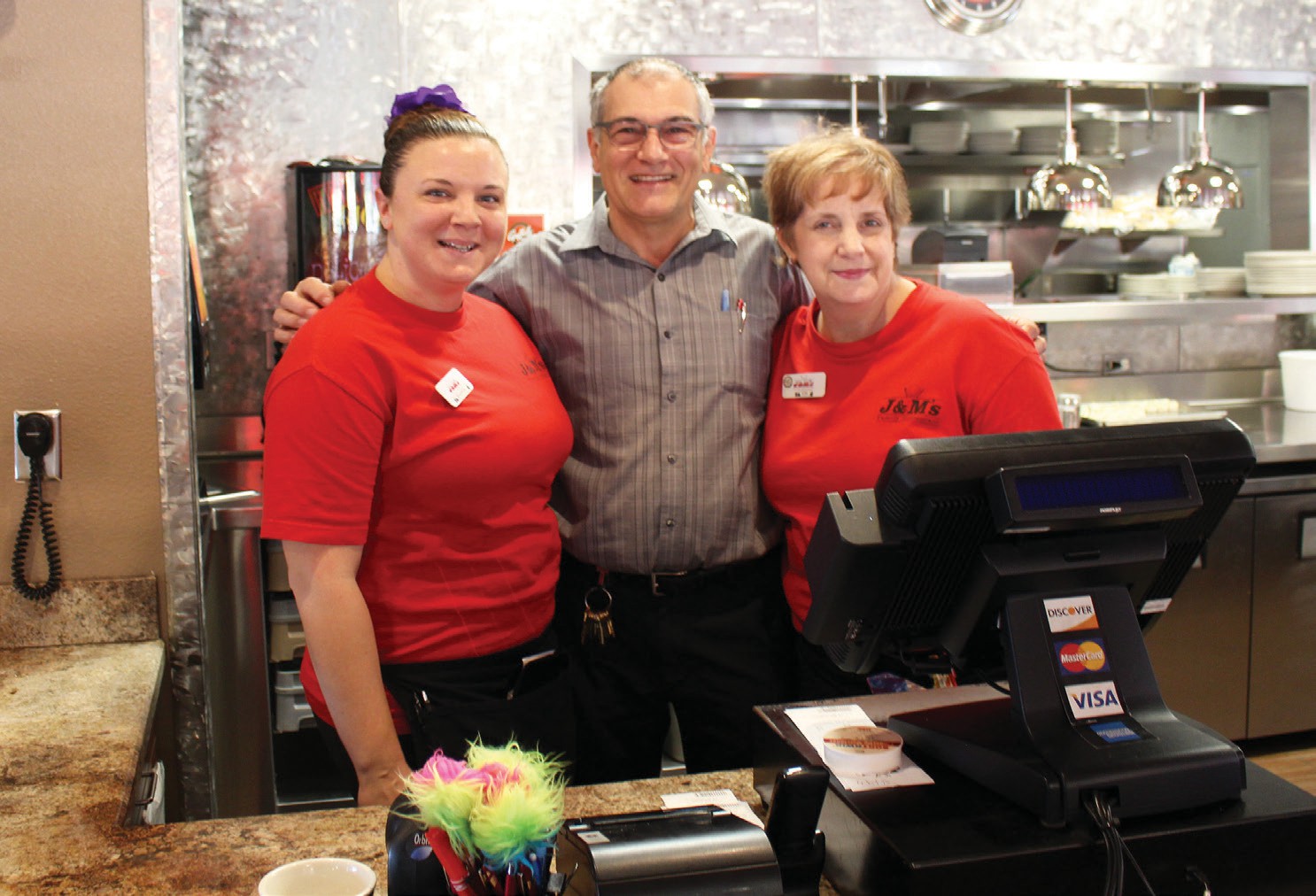 Joe Goncalves, owner of J&M’s Restaurant, has always prided himself on selling “quality food at an affordable price. He is shown with longtime employees Shannon Jones and Kimberly Forrest.

You know how we are told that there is no inflation to speak of? Tell that to your local restaurant owner.

“Restaurants must increase revenue or fail,” says the Food & Beverage Association of San Diego. According to a statement put out by the association, “Operators are experiencing increased costs beyond their control and must find new ways to gain extra revenue or risk failure. Their challenge is increasing revenue while not alienating guests and employees.”

We asked Joe Goncalves, owner of J&M’s Restaurant, one of Escondido’s iconic eateries, about his expectations for the restaurant business in 2017, the year that Trump takes over as president. Will everything be lollipops and roses for the dining industry?

“Well, yes, I think he [Trump] will be good for business nationally, but what can you do about California? It won’t make much of an impact here. I don’t think California is going to pass laws good for business,” says Goncalves, who considers many of the state’s regulations to be business killers.

A new minimum wage of $10.50 became effective after the New Year, which will slowly increase to $15 over the next few years. “It’s going to affect employers,” says Goncalves. “Costs will probably go up as a result. When you pay the extra dollars an hour you have to add several more dollars with payroll taxes and workers comp.”

Goncalves has 28 employees, most of them fulltime and some part-time. When he gives any of them a raise he feels that it is only fair to give all a raise. Many of his employees have stayed loyal through the years, even when his restaurant Nine Islands burned down and he had to wait three years to rebuild. “When we give a raise, everybody gets a raise,” he says emphatically.

The increased minimum wage will have the ripple effect of increasing the costs of the produce that J&M’s buys, and which ends up on your table. Not to mention water rates, which went up 5.5%, which went up with the New Year, and sewer, which went up 5.5%. “Everything is going to go up,” says Goncalves. “They keep saying there is no inflation, but you know that is wrong.”

At the same time the credit card companies keep raising their merchant rates. Goncalves estimates that it costs $2,600 a month to process card transactions. “Customers don’t realize how much it costs and that it is added on to the cost of the food. It costs us $31,700 a year to do credit cards,” he says.

Having said all those negative things, Goncalves describes his business today as “pretty good. Steady. The last few months have been a little slow. The months before the election many customers took a step back, saying ‘I don’t know where this is going to go.’” And that affected business.

Add to that his estimation that “California hasn’t yet gotten out of its slump. Look at all the regulations. I’m all for clean water and recycling. I’ve been doing recycling for many years. But the regulations prevent you from cleaning your sidewalk because the water goes into the ocean. The whole thing doesn’t make sense to me.”

If anyone knows the promise of the American Dream, it’s Goncalves, who came to America from the Azores in 1973 — for the opportunity.” The “nine islands” of the Azores, a territory of Portugal, would lend their name to the restaurant that he owned until four years ago — when it burned.

“When I came here and got a decent job it was enough to keep up with payments. Now when two people in the family works it’s hard to keep up. We still have the best government in the world — better than Europe. But the regulations make it hard to start a business.”

Goncalves has forged a special relationship with the regular customers who have been coming in year after year. “We talk about all kinds of things,” he says. “We are like family. With some I talk politics, with others the weather.”

This spring he plans to introduce some new menu items to mix things up. But some things never change: “We’re committed to quality food at a reasonable price.”

They buy locally whenever possible. “I buy from Fluegge Egg Ranch in Escondido because quality is very important to me.”

When they rebuilt the restaurant, they gave it the name that stood for the lifelong partnership between Joe and his wife, Maria: J&M. He runs the restaurant and she does finance.

“You have to like what you are doing if you are going to do it well,” he says. “I like coming to work every day and I like working with people. That’s what makes the job worth it. Because it is a hard business and getting harder. When I first started in this business you needed two licenses to operate. Now you need nine.”

However, one gets the feeling that if the number of license rises to a dozen, that Joe Goncalves will still be showing up to do what he loves.