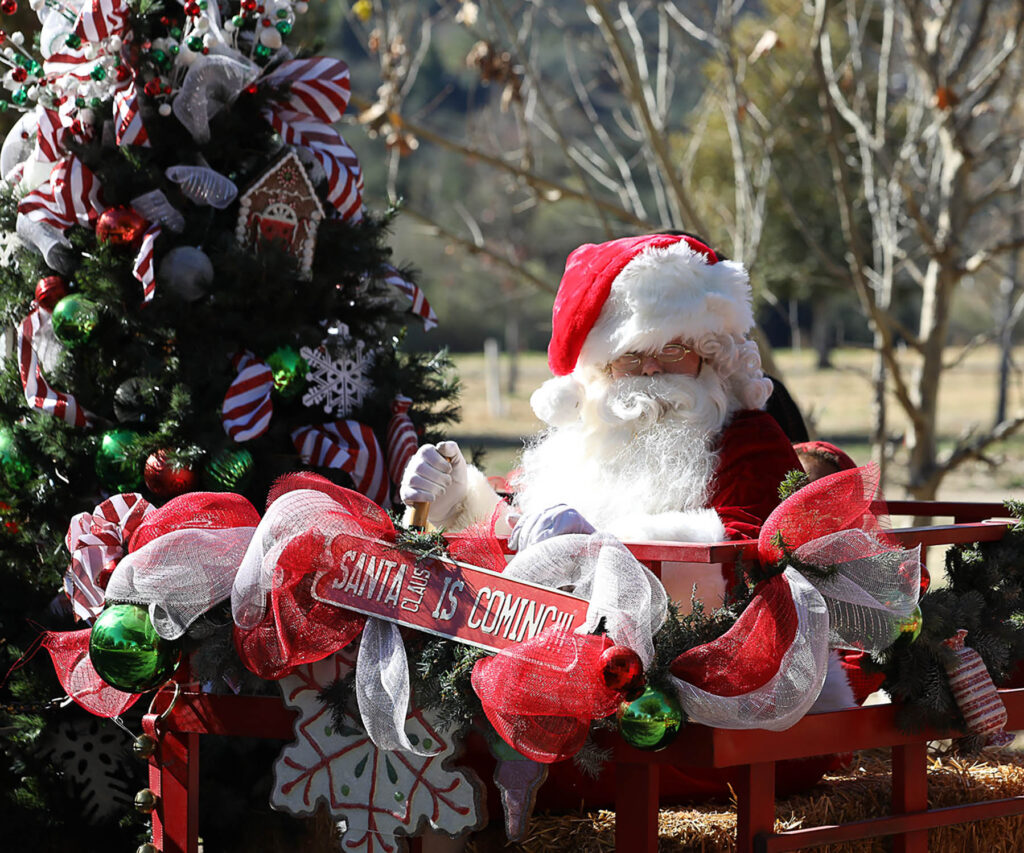 Santa Claus. Has he lost a little weight worrying about labor issues and safety regulations this year?

Imagine the thrill of chatting with Santa, that jolly old elf!  I never realized the power of an Escondido Times-Advocate press pass .

Much to my amazement, Santa had a lot to say about life in the North Pole and his operations.

What’s it like to be Santa? How have the crazy activities of a 21st century world  affected his magical realm?

For the interview we set up a ZOOM meeting. ZOOMING  with Santa in the North Pole was not without its challenges.

Not that familiar with ZOOM,  Santa had trouble getting his video and sound working coupled with a poor internet connection due to an atrociously slow dial-up. But the information made it  through, nevertheless.

Maybe it was the stress from the intensity of the season, maybe he just needed an ear.  Santa opened up to me and shared the folly of his jolly old  self and all that entails.

Santa’s little elves had been out on strike demanding a raise in wages—citing too much overtime, difficult working conditions  and wanting additional  isolation pay. After intense labor negotiations and coming to an agreement,  they were back in the workshop and now busy catching up with the backlog.

Apparently the elves claimed that the jingling bells were driving them crazy and if they had to listen one more time to “I saw Mommy Kissing Santa Claus”  they were going to demand ear plugs or walk out. They also wanted something more than sugar cookies and candy canes to eat.

Regarding the diet, Santa feels that sugar gives them the extra energy for all that needs to get done.

And with the increased demand for toys he needed all elves on deck. Santa was prepared to negotiate but did not know how he was going to meet their demands. He finally compromised by playing Mariah Carey songs where he could sneak in “All I want for Christmas is you” once in a while.

As to the cookies and candy, he promised to include some salad to satisfy their love of green.

“Sure, it’s easy to build a wooden car or rocking horse, but come on,  an X-Box or a drone with infrared camera,  that takes time,” exclaimed Santa. “ I have to either hire elves with electronics training to assemble these glitzy  gadgets  or provide it for my workers. Do you know how costly that is?  And now they want a raise because they consider themselves ‘TWITS’ (Tiny Winter Industrial Technology Specialists) instead of Workshop Elves?  How is a guy to survive?”

If that wasn’t enough,  Santa shared that an animal rights group had advised him that he must  limit the number of hours reindeer can fly without a break and provide them a special diet.

“Do you realize how inflation has driven up the cost of specialty reindeer food,” asked Santa?

And then there was the sensitive issue of Santa being required to lose some weight  to  lessen  the load on the reindeer.

“Imagine that,” he said. “If I do that how will I fit in my clothes and how will people recognize me?”

He did admit that he was considering changing his outfit to something different,  since he was tired of wearing the same ol’ same ol’. But Mrs Claus objected to purple polka dot long woolies or fuchsia and pink stripes— saying that it was unbecoming for a man of his position. She felt that it could also be dangerous and that he could be mistaken for an unwelcome intruder if he were not wearing his traditional red and white.

“ Do you know how much it costs to convert Rudolph’s nose to LED?” Santa went on to say.  “ Have you any idea how hard it is to wire a reindeer? “

And now that there are laws requiring people to pick up after pets,  it will take him a lot longer to deliver toys.

Santa did admit that in spite of all these hurdles, he is on schedule and he will be making his rounds come hail or high winds and that he is looking forward to his milk and the variety of delicious  cookies as he makes his rounds.

Santa worries though, that with inflation people may be cutting back and he may have to settle for Saltine crackers and water.

And while he appreciates peoples’ focus on health,  he asked if people can please stick with the glass of whole milk and eliminate the almond, coconut, oat or non fat milk and the gluten free, sugar free, dairy free, soy free, nut free, non GMO, non fat cookies?  He made it a point to add that there could be something special under the tree for those who offer a shot of Glenfiddich 18.

By Christmas Eve,  Santa, Mrs Claus,  his elves, the TWITS,  Rudolph and the eight tiny reindeer have overcome adversity, patched up differences and come  together like  clockwork to deliver joy and goodwill  to the world,  wishing “Merry Christmas to all and to all a goodnight!”