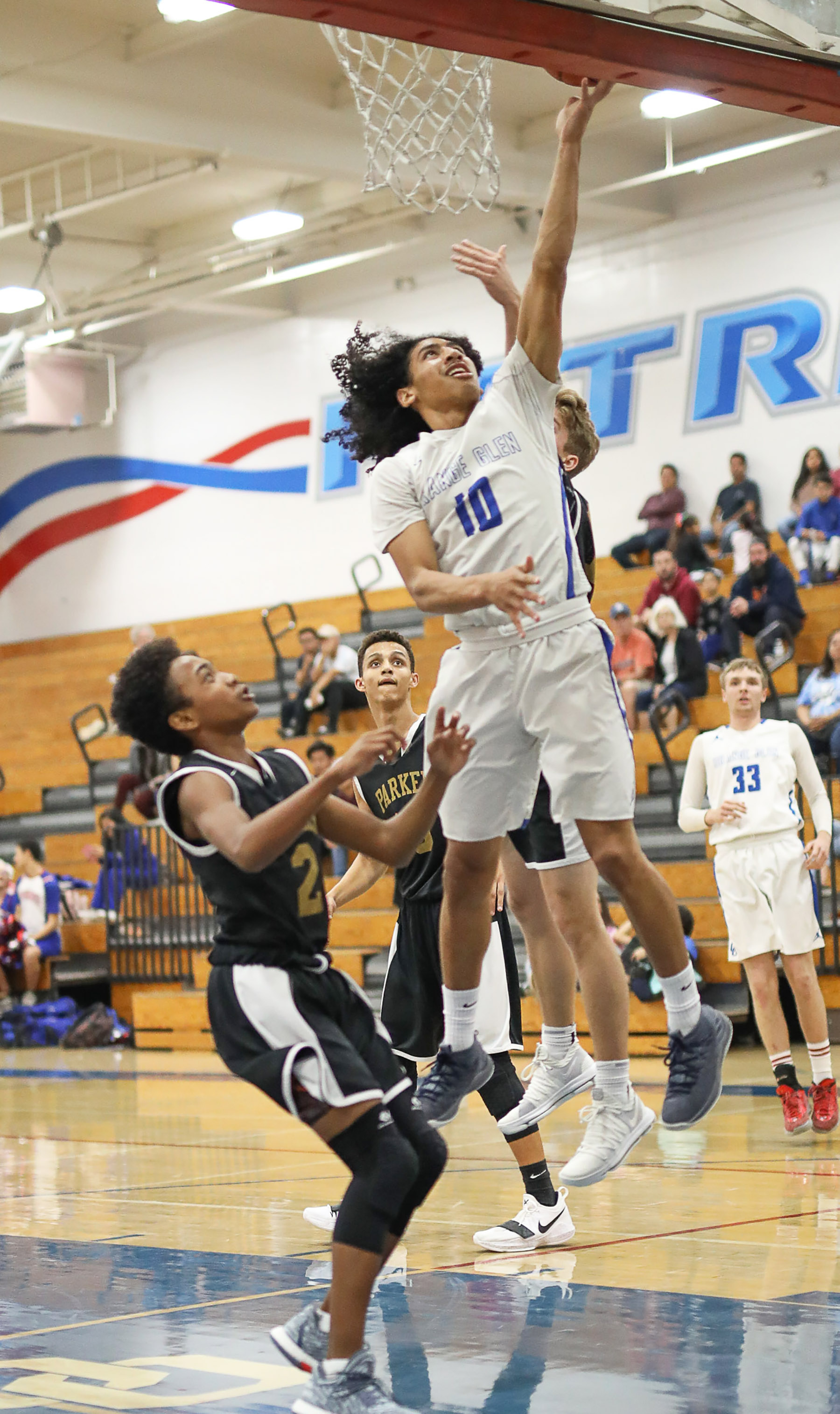 While at Orange Glen, Miller was known for (among many other things) his signature long hair and ability to elevate to great heights.

There is absolutely no doubt that Damien Miller is a supremely talented basketball player.

To say the least and with his signature long, dark hair flowing behind him, Miller makes for quite the visual. Whether he’s using his astounding 42-inch vertical leap to attack the rim or sky  for a rebound, hounding opponents with smothering defensive coverage, dishing the rock with pinpoint accuracy or exhibiting an endless motor that makes the Energizer Bunny look lethargic, Miller is a four-tool wonder.

At Orange Glen High School he was an absolute show-stopper. As a testament to his all-around game, the electrifying 5-9 point guard almost averaged a triple-double (16.4 ppg, 9.2 rpg, 9.3 apg) during his senior season. By the time Miller exhausted his prep eligibility, he had rung up accolades that made for one glossy resume – a two-time team MVP, twice a first-team all-leaguer, an all-CIF selection and a third-team all-state choice. In addition, he surpassed the 1,000-point mark during his time as a Patriot.

His coach at OG was Chris Featherly, who couldn’t sing his praises enough. Featherly called Miller the best point in the county and said he was the finest rebounding guard he had ever seen. In addition, Featherly rhapsodized about Miller’s relentless hustle, ability to penetrate and knack for involving his teammates among many other assets. For his part, Miller is quick to acknowledge the vital role that Featherly played in his emergence as a prep star. “He’s just a really good coach who treated me like a son,” Damien says with gratitude. “But what he really taught me was how to be confident on the court and play with that type of attitude.”

Featherly firmly believed that Miller had the potential to make a real impact at the collegiate level, perhaps even as high as Division I. Schools such as Cal State San Marcos, San Francisco State and others expressed genuine interest but there was an underlying concern – Miller’s scholastic status. Admitting that he was lax in the classroom during his freshman and sophomore years – “I didn’t focus and kind of messed up,” he says – Miller confronted the daunting task of trying to make amends as an upperclassman. Though he subsequently showed an earnest commitment to his studies, demonstrated real improvement as a student and elevated his GPA, it apparently wasn’t quite enough to satisfy the requirements of those higher-profile schools that had been intrigued by his considerable basketball upside.

Fortunately, Miller found a great landing spot where he could not only hone his craft as a hoopster but continue to prove he’s capable of handling a bona fide academic workload. San Diego Miramar College had long taken note of Miller and was actively recruiting him. Eventually, their paths would beneficially intersect and a comfortable fit developed. “We stayed on him, showed some loyalty and were fortunate to get him,” says Miramar athletic director and accomplished head basketball coach Nick Gehler.

It would be an understatement to say that it’s been a great collaboration for all parties concerned. With Miller acting as the spearhead, the Jets raced out a splendid 10-2 record in 2018-19 that had them, at one time, placed 11th in the state’s junior college rankings. But devastating injuries to a pair of key starters have recently undermined the Jets who, after losing five of their last six games, now stand at 11-7.

However, that change of fortune has done nothing to take the luster off of Miller, who continues to play lights out while averaging 11.9 points, 6.6 rebounds and 5.2 assists a game. Handling the ball a staggering 90% of the time, Miller remains the consummate orchestrator, creating opportunities with deft drives to the hoop before neatly dishing off to available shooters. Armed with hawk-like vision, he’s a master at seeing the whole floor and getting just about everyone of his teammates involved.

“He’s maybe our best player and certainly one of the top two point guards I’ve ever coached,” says Gehler, who is now in his 13th year at Miramar. “He’s a tremendous athlete who can run the floor and then show great defensive intensity at the other end.”

Because of his innate ability to leap into rarified air – Miller’s vertical exceeds that of LeBron James for instance– the explosive guard can play and finish above the rim, which makes him a constant scoring threat. And although he’s always been a solid shooter with good range, Miller’s eye has grown even sharper in college to point where he’s become nails from the perimeter and sometimes even beyond. “You can’t leave him open or else he’ll knock it down,” warns Gehler.

Though Gehler reveals that some Division II schools have been sniffing around and inquiring about Miller, the coach indicates the plan going forward is to have Miller remain at Miramar for another season in order to augment his growth as both a player and student.

“I really love having him here,” Gehler relates. “Not only is he a great teammate but he’s also a great person. And on the court his demeanor never changes. He’s steely with his emotions and just one great competitor.”

If circumstances had been somewhat different, there’s a strong likelihood that Miller would now be playing at an established four-year college. That would have been the ideal but that’s not to discount juco ball, which is highly competitive and a great proving ground for transitional talents like Miller. Playing for the Jets has made for an easy adjustment for Miller because Miramar’s offense is very similar to what he ran at OG. There are plenty of opportunities for him to attack, demonstrate some serious hang time and then decide whether he wishes to finish at the rack or kick it out.

And indicative of his selfless and rather reserved nature, when asked about where he excels on the hardwood, Miller doesn’t talk about his majestic jumping, tenacious defense  (where he’s often matched up against the opponent’s best offensive player) or even his consistent scoring. Instead, aside from his ability to expertly read the court and all the variables involved with that challenge, what he prefers to discuss is his gift for sharing the ball, involving his teammates and being a topnotch facilitator. “I would much rather pass and get an assist than just about anything else,” he says convincingly. “I think that’s what I do best.”

As it’s turned out, Miller is in a good place that should act as a springboard for his eventual ascent to the next level, wherever that may be. Because his game includes the rare combination of flamboyance mixed with textbook execution, he’s a package that should and will be in demand by the time he exits Miramar. Unless something totally unexpected transpires, Miller’s basketball exploits should grow even richer and more pronounced in the next few years.

To borrow a phrase from a popular beer commercial, it was Miller time at OG, it’s now Miller time with Miramar and in the not-too-distant future it figures to be Miller time somewhere else. Like one of his patented leaps, Miller’s basketball future appears to be rising still.