Even at 82, playing hockey remains in his blood 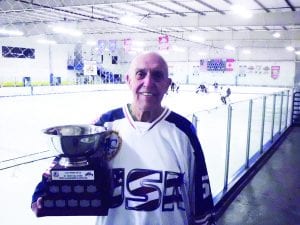 Proudly donning his USA jersey, Escondido’s Rick Lohnes holds the Cup that he and his teammates won in the inaugural 80-plus game versus Canada.

The legendary and iconic hockey star Gordie Howe was revered for many things. Among them was his incredible achievement of being able to play competitively in the National Hockey League at the unheard of age of 52.

To say the least, that was a remarkable testament to his skill, staying power and longevity. In short, Howe was a marvel who busted myths about what an aging man could accomplish at a time when conventional wisdom held that he should be content to confine himself to the grandstands if not a rocker.

Interestingly, there’s a local resident who’s a hockey marvel as well, following in Howe’s tradition of not allowing the passing years to preclude him from getting out onto the ice.

Escondido, meet your own hockey diehard in 82-year-old Rick Lohnes. On Monday nights at 7:45, you’ll find him at the Ice-Plex competing primarily with and against 50 and 60-year-olds in a non-contact, recreational setting where there are no refs or stop time.

But obviously that’s just to get his juices flowing because the following evening at 9:30 at the same location, Lohnes is right back at it in a slightly more organized and competitive environment, doing his best to hold his own against players most of whom are 20 to 40 years his junior. That’s pretty impressive stuff for someone who’s already well into his ninth decade of living.

When asked what drives him to continue to stay active in the sport, Lohnes is quick to respond. “The real motivation behind it is that I simply love and respect the game,” Lohnes says. “But I also really do enjoy the camaraderie that exists between the guys that I play with.”

Arguably, the biggest thrill that Lohnes has experienced in hockey came last October when he was a member of a 15-man squad that represented the United States in the first-ever 80-plus Hall of Fame game versus Canada. With the city of Ottawa serving as host, Lohnes and his teammates (who hailed from such locales as Alaska, Colorado, the Midwest, Massachusetts and Northern California) eventually emerged victorious with a 3-2 win in a shootout. And like the Stanley Cup that has Howe’s name inscribed on it for being part of four championship teams, Lohnes’s name is now affixed to a similar trophy emblematic of the U.S.’s triumph in the inaugural 80-plus matchup between the two North American neighbors.

The hockey journey of Rick Lohnes is definitely a road less traveled and certainly not a traditional one. Born in Nova Scotia and a resident of Canada until his late 20s, Rick never played in any organized leagues while growing up. His exposure to the game came in the form of pick-up games or casual get-togethers on the street, pond or river.

In October of 1965 after moving to Southern California, Lohnes became aware of a rink in West Covina where players in their 20s and 30s competed. It was there that he reconnected with the game and didn’t miss a Saturday night’s action for five years. An offshoot of this experience was that he formed his own traveling team that would periodically head over to Torrance to play.

That was the genesis for him to eventually participate in about 35 tournaments including the American Seniors Olympics where he has been the member of some notable and accomplished teams. Lohnes is the proud owner of several gold and silver medals that were won at the ASO.

Standing at 5-foot-7 and 157 pounds, Lohnes alternates between playing forward and on defense at the Ice-Plex although he thinks of himself more as a blueliner. When queried about what he does best, the personable 30-year Escondido resident considers his “soft hands and my stickhandling,” to be his most tangible assets. But he’s hardly full of himself and often is quite self-deprecating when it comes to discussing his game. “Obviously at my age I’m not going to be very quick,” he jokes, “but I’ll show up, try hard and do the best I can while making it through. To be honest, I consider myself very fortunate and lucky to be able to continue to play. I’m too old to feel this young.”

Best guesstimates have it that there are about 150 players 80 years of age or older in the U.S. and Canada who still participate/compete in hockey. That he is among that remarkable few puts Lohnes in very rarified air indeed.

Lohnes hopes that in some small way he serves as a source of inspiration and encouragement to anyone – but most specifically – those in their 40s, 50s, 60s and yes 70s to come back out, and revisit with the game they may not have played for awhile. With more than a sufficient number of rinks available in the San Diego County area, Lohnes wants to spread the word that there are plenty of opportunities to lace up the skates and enjoy the many benefits of participating in non-contact, recreational hockey.

Though Lohnes (knee replacement) and his fellow greybeards are certainly not immune from having to deal with various aches, pains and conditions that are a byproduct of aging, that in no way dampens their enthusiasm in having the chance to put their hockey skills to use and toil at a sport that still captivates them.

It’s become almost a given that in the locker room after either Monday or Tuesday night’s play, the upbeat and young-at-heart Lohnes will invariably summarize what took place with his signature expression, “Now, was that fun or what?”

Damn right it is for someone who’s a hockey marvel in every sense of the word. “Believe it or not, I’m still trying to learn and improve in any way I can,” Lohnes shares. “But most importantly, I come away from every time on the ice with a real feeling of satisfaction.”

If there’s ever been anyone who must be considered a hockey-lifer, it is Lohnes. And if he were still alive, the great Gordie Howe would certainly have been inclined to agree.