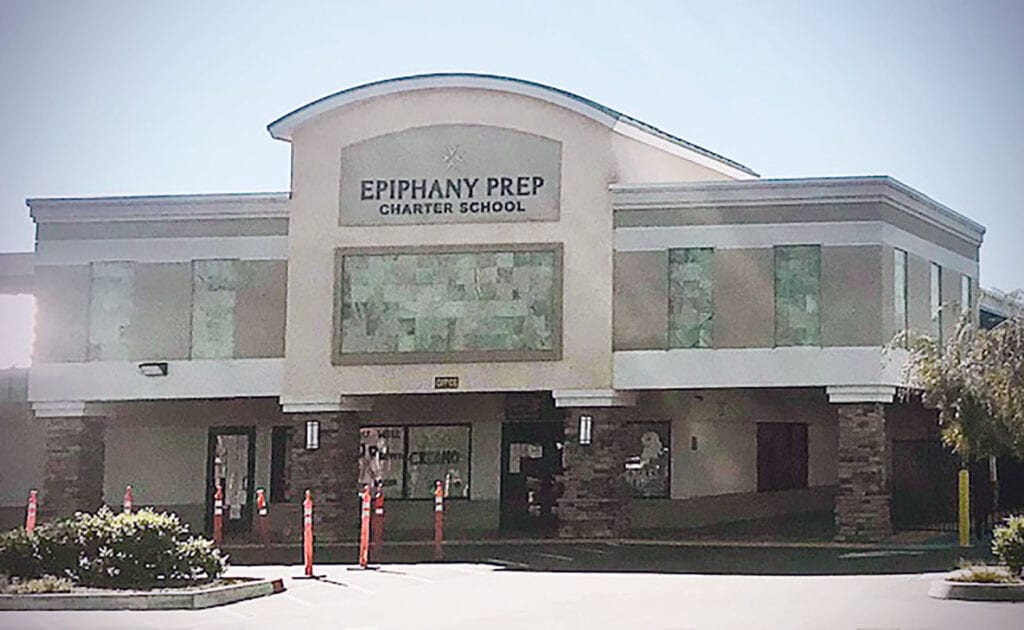 The board of the Escondido Union School District has denied the five-year renewal of the charter of the Epiphany Prep Charter School (725 Escondido Blvd).

On Thursday, February 11, the board met in special session and voted 5-0 to deny the five-year renewal of the charter school, board members emphasizing that they were following state law and regulations and believed they had no other choice.

Of all the board members, President Doug Paulson had the most to say concerning Epiphany Prep’s request, noting his special concern because the school is “in my neighborhood.” But he said he saw no “grey area” in state law which mandates denial of renewal for a school that performs below stated levels.

Based on its test scores, Epiphany falls into the “low performing” category. Thus Paulson said board approval of the school’s renewal would be violating “our oath of office,” and that the board had “no authority to change the law.” And the other board members expressed this same constraint.

Opened in 2016, Epiphany Prep describes its mission as serving a population of children facing “the greatest obstacles to succeeding in school,” including a large number of non-English speaking and special ed students.

Commenting on the board’s decision following the meeting, David Rivera, president of Epiphany Prep, said he was not surprised by it. He said that as early as last April “We knew it was going to happen.” And he said the district had failed to provide Epiphany sufficient “due process” in making its decision.

Rivera noted that Epiphany has experienced constant growth in enrollment, now having 750 students, 98% of these Latinix, and 11% special ed, with a high level of satisfaction by parents. Rivera also suggested that EUSD was generally troubled by the loss of revenue resulting from so many students “flocking to charter schools.”

He said that Epiphany Prep will now go to the San Diego County Board of Education where it can appeal the decision. If denied there, it can seek appeal at the state board of education. The school’s authorization to operate expires June 30, 2021.

In its presentation to the board, EUSD staff members offered statistics indicating that Epiphany Prep’s students, in several grade levels, were testing significantly below California students in math and English learning, thus identifying it as “low performing.”

But Rivera said that this ignored the significant academic growth being made by students so that Epiphany should be considered as “middle performing.” He said that the board was depending too much on one set of statistics rather than considering multiple measures of educational quality, such as the academic improvement of the school’s students.

The EUSD board’s decision also followed the recommendation by a district team to deny the renewal. That recommendation faulted Epiphany’s ability to implement the programs outlined in its petition; the lack of legally mandated program descriptions; and educational and financial plans described as “inadequate and unrealistic.”

The EUSD board then held an initial public hearing on Epiphany’s petition on November 20, with parents and teachers expressing strong support for the renewal.

In addition to reviewing comparative test scores at last week’s meeting, district staff also cited four areas of concern to support non-renewal:  some parents not re-enrolling special ed students; problems with access to Epiphany’s board meetings; the failure of Epiphany to provide EUSD with required credentialing information; and concerns about the school’s financing program.

Information – said to be acquired  “accidentally and anecdotally — concerning proceeds of a $5.5 million bond issue provided to Epiphany indicated a lack of explanation about plans for “rolling that debt over” and no funding source identified to do so.

Additionally, it was noted that the school is currently making “interest-only” payments on that debt, without explanation for doing so. After the meeting, Rivera said interest-only payments were being made in order to reserve necessary cash during the pandemic.

Charter schools can also seek two-year renewals, but this alternative was not voted on by the board.