EUHSD honors Teacher of the Year 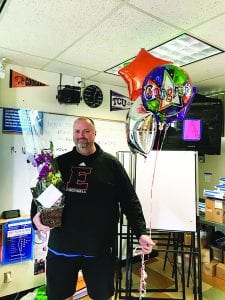 The Escondido Union High School District (EUHSD) has honored Jim Williamson as 2018 Teacher of the Year.

John Williamson earned a Bachelor of Science in Exercise and Nutritional Science from San Diego State University. He earned his secondary Physical Education credential with a supplemental authorization in Mathematics from Chapman University and earned his Master Degree in Education from Grand Canyon University.

Williamson has been an educator in Mathematics at Escondido High School for 24 years.

In the recognition about Williamson, the district stated: “It is evident that John is committed to the students’ learning and their success within the classroom. John started using computer-based programs in Mathematics (New Century) in 1997. John launched the Plato Online learning program to the Math department in 2008. John also was active in developing online learning in conjunction with direct instruction (combo classes). In 2012, he was instrumental in the development of the Math 180 program. In 2015, school objectives and district goals changed to using Common Core Math.”

Williamson was among the first team to participate in Math Studio training which introduced Common Core Math 1 to students at EHS. He continues to participate in Math Studio and is presently the Math 1 PLC Lead. He has shown extraordinary leadership as the Math 1 PLC Lead. He has helped the team grow into one where the teachers plan together, discuss assessments, and model lessons for each other.

In an interview by the EHS newscast, EHS students respectfully introduced Williamson as “the man, the myth, the legend.” But John Williamson is an extraordinarily kind and humble man and well respected by students and staff members at Escondido High School.

“Coach Willi” has been the Senior Class Advisor for 24 years. He has organized the chalking of the “E” for 24 years. There is no doubt that he is competitive as he was the canned food drive champion 11 times with a personal record of 8,420 cans for 2017. When asked what he would like for his birthday or Christmas as a gift, his response is always cans of food for the food drive. He was also the Pasta for Pennies champion in 2010.

On the personal side, John met his wife Sara at EHS. She was the athletic trainer and health teacher. They have a daughter, Hannah, who is 12 and a son, Easton, who is 11.

Coach Willi is an extraordinary man that will always be there when the school or community is in need. He volunteered during the fires when EHS was an evacuation site.