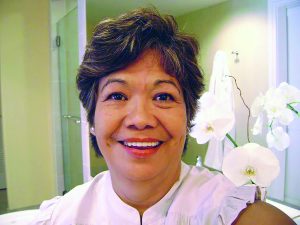 Esther Haigh  was a longtime resident of North County. She was an active church member who was known for building community and spreading laughter. She passed away peacefully on March 4.

She was preceded by her loving husband Rex Haigh, with whom she shared a beautiful life with that included travel, love and laughter and raising their only daughter together, Des Haigh.

She is survived by her  daughter’s family, Des Haigh and David Akai, her granddaughters, Lucy and Anaïs and her son, Issa Sidibe.

Mrs. Haigh was a beloved friend to many and will be missed by the numerous lives that she touched.

Services were held at New Life Presbyterian Church in Escondido on March 17-18.