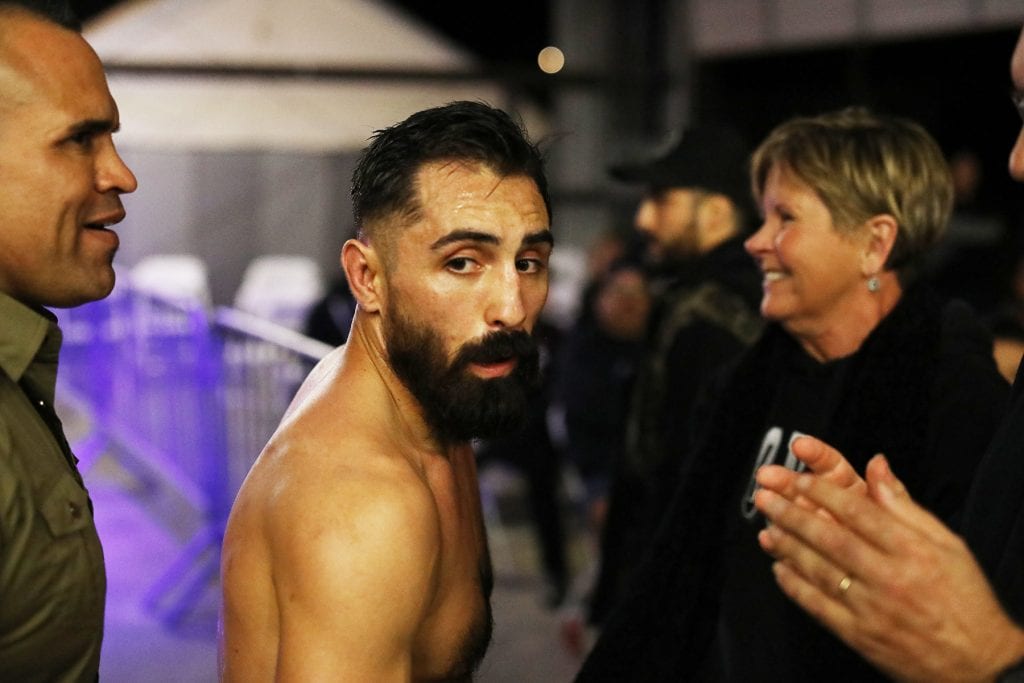 Escondido’s Victor Rosas will have his eye on a signature MMA win this Friday night at Pechanga Resort and Casino.

This is exactly why Escondido-based MMA fighter Victor Rosas fighter has sacrificed, busted his hump and trained so diligently. Namely, to be being given the chance to demonstrate his ring chops at a high-profile event sanctioned by one of the sport’s top promotional entities.
Well, come June 29 on the grounds of the Pechanga Resort and Casino, the 29-year-old Rosas will get the opportunity to make a declarative statement about himself and his career as part of the prelim card at Bellator’s MMA 201 event.
To say that Rosas is ready would be an understatement. For better than three years, the 5’7,” 135-pound bantamweight has been pointing towards a defining moment like this. And when listening to him, there’s no mistaking he intends making the most out of it. “I’m ready to get out there and showcase my skills so that people can see who I am,” says the personable Rosas. “I’m looking to get the win, come out of it healthy and then keep moving forward.”
Approximately a month ago, when fighter Lance Lee bowed out of the aforementioned event, Bellator was looking for a replacement to square off against Ricky Furar in a scheduled bantamweight contest. When Rosas’s manager Johnny Hughes made his charge aware that a potential opening existed, Victor told Hughes to inform Bellator that he wished to be considered as someone who could step into the breach.
Taking note of his 3-1 record as a professional (1 no contest), his 4-2 slate as an amateur and the fact that Rosas has name recognition in the North County, Bellator decided he was a good fit and tabbed him to take over for Lee. Signing a contract about two weeks ago, Rosas is now primed to deliver a performance he hopes will springboard him to even bigger and better things.
Though Furar has a limited resume with just two pro bouts, a video on him shows that he possesses legitimate striking and takedown ability and is capable of switching stances. Rosas has taken note of all this and confides that he “may have found something that I can capitalize on.”
Though his approach will ultimately be dictated by how Furar wants to war, Rosas’s blueprint calls for him to feel out his opponent, gauge his distance and Furar’s reaction time, display constant movement and then pick his spots. Because Rosas considers his boxing and jujitsu skills to be his greatest assets, those are the principle weapons with which he plans to harass Furar.
In this pivotal week leading up to the bout, Rosas will work on his cardiovascular fitness (running, treadmill, bicycle) in the morning and after putting in time at his day job, he’ll spend the evenings fine-tuning his techniques, sharpening his footwork and pounding the bag. Wednesday and Thursday will also be aimed at shedding some pounds so that when he steps on the scale a day before the bout, he’ll have no trouble making the prescribed weight. “I’ll have to cut a little (weight) off,” confides Rosas, “but not as much as I’ve had to in the past.”
And when Rosas takes to the ring (based on where he’s situated on the card), not only will he bring with him a proven toughness, tenacity and tactical acumen but he’ll also be the beneficiary of an experienced corner. In addition to his knowledgeable manager Hughes, Rosas will be supported and encouraged by training partners Mike Andaya and Derek Anderson, both performers in previous Bellator promotions.
Rosas is keenly aware of the importance of this bout and what may be at stake. An impressive outing here could well be enough for Bellator to consider signing him to future bouts, either on a fight-by-fight or more extended basis. “There’s no doubt that because this is a major promotion, this is the biggest fight of my career,” admits Rosas. “This is such a great opportunity for me to demonstrate my potential, get my name out there and put on a good show.”
There is much evidence to suggest that Rosas is primed for both immediate and future success. In the ring, he’s proven that he can win in any number of ways, be it by decision, a TKO or by submission. Certainly the magnitude of the moment shouldn’t overwhelm him because he knows how to keep his emotions in check, staying poised and focused. Plus, performing in front of a sizeable, sold out crowd doesn’t figure to unnerve someone who once toiled in front of approximately 9,000 patrons.
Given that Rosas is motivated to the max and seemingly is in a great place with both his mind and body, it’s hard to imagine him not giving Furar a rough time of it. “A lot of this game is mental, in addition to controlling things both in and out of the ring,” says Rosas. “And from those standpoints, I’m real good. Above all else, I’ve got my mind right.”
On so on Friday, when he begins warming up for his tussle with Furar, when he starts jumping rope and doing some pad work in order to get the blood flowing, break a sweat and open up the lungs, you can rest assured that an amped-up Rosas will be prepared to bring it. “I’m confident I can get it done, be it standing up or taking it to the ground,” he conveys with conviction.
Unquestionably, this is a supreme moment for Rosas and from all appearances, he’s bound and determined to seize it.