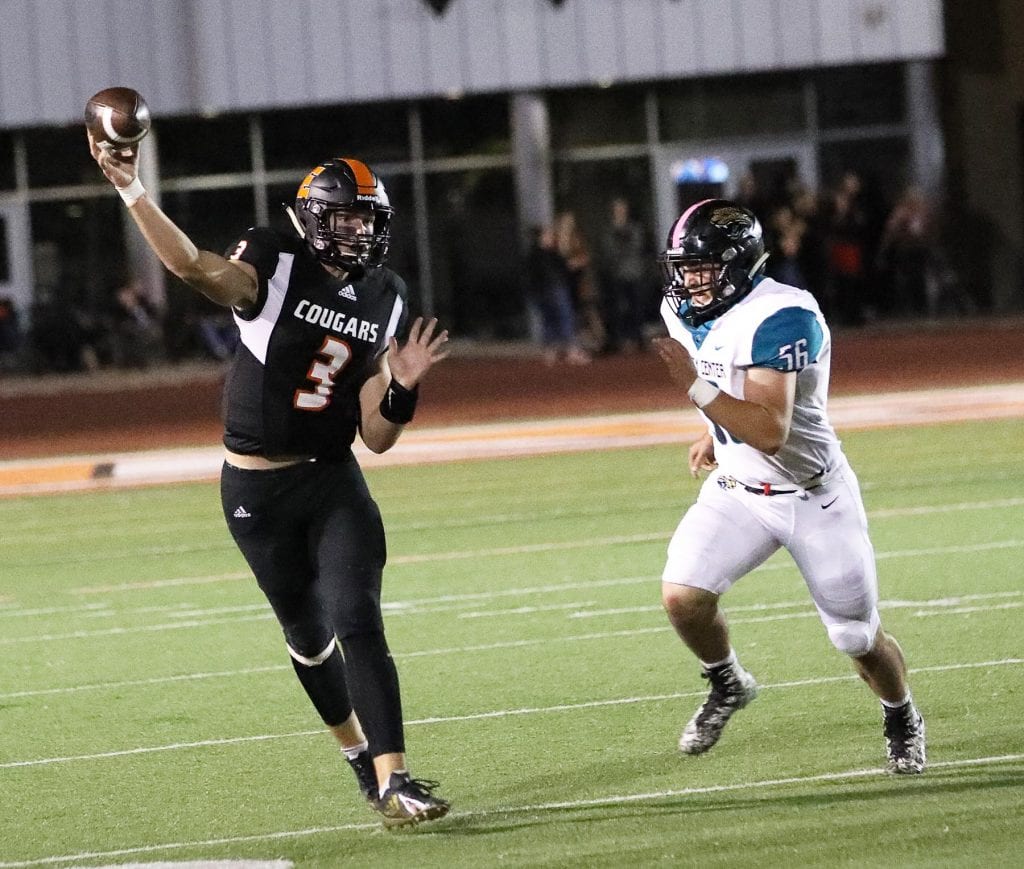 In a startling display of long-distance bombing that evoked fond memories of the old pass-happy AFL or some point-a-minute video game, the host Escondido Cougars unleashed an awesome aerial assault on the Orange Glen Patriots last Friday night that proved decisive during a 49-29 victory at Wilson Stadium.

The impressive performance marked the 16th consecutive triumph for Cougs over their nearby neighbor and was accomplished in front of 21members from Chick Embrey’s 1969 CIF Championship team who were honored at halftime.

Though he had plenty of assistance along the way, there was little doubt that Esco’s Robbie Ramos was the headliner on this historic evening when the Cougar quarterback set a school record by tossing for 441 yards that translated into a hefty six touchdowns. And just to put some icing on the cake, Ramos also tallied on a rushing TD. “This might have been his coming-out-party,” Escondido head coach Jud Bordman said of Ramos’s sparkling performance. “He’s a great kid who works hard and he’ll really benefit from knowing he’s capable of doing something like this.”

With the win, the Cougars evened their record on the young season at 1-1 after a frustrating loss the week before to visiting Hilltop. Bordman felt his squad might have been undermined by overconfidence against the Lancers. As a result, he was anxious to see how they would respond in the face of some early adversity. “This game was a wakeup call so we really challenged our guys to come out hard and meet the test,” said Bordman. “I think they definitely did that.”

For the vanquished Pats, their ledger fell to 1-1 after having whipped Waimea in a season opener over in Hawaii. “I’m proud of the way our kids fought back in the second half and made it a game,” said their energetic coach Jason Patterson. “But we just didn’t make the big plays on either side of the ball when we really needed it.”

Entering this intracity battle, the major storyline of the contest was the pitting of Esco’s Matt Malone against OG’s Cael Patterson, without question two of the most dynamic running backs in all of San Diego County. But the expected duel between these two standouts never materialized. In an unforeseen development, Malone didn’t suit up because he had violated a team rule and was designated inactive for the game. It was a major blow to the Cougs because the versatile Malone is readily acknowledged to be team’s best player but Bordman is a huge believer in accountability and won’t compromise on doing things the right way. The good news for Esco fans is that Malone’s absence was temporary and he was back onboard when practice reconvened early this week.

But in the major void that Malone’s unavailability had created, someone had to step into the breach and it was Ramos, above all others, who rose to the occasion.

Showcasing a powerful and exceedingly accurate arm, Malone had the look of a prep John Elway as he threw often and deep and went into halftime having fired five TD strikes. The last three of which were corralled by the fleet-footed and elusive Tajae Brooks who took it to the house with receptions of 55, 61 and 56 yards. Not only was the electrifying Brooks consistently getting behind the Patriot secondary but he also showed a knack for shedding a tackle if anyone did get a hand on him. It literally became a case of no one being able to stop him.

To be truthful, with the count 35-8 at intermission, the eventual outcome appeared all but decided but much to their credit, the dogged Pats dug in and refused to go away. OG began a comeback bid approximately midway through the third quarter when Patterson, who had scored earlier on a nifty sideline/cutback run, gathered in a 16-yard TD toss from Ethan Villalobos after hand-fighting with a Cougar defensive back.

That drew OG a bit closer but just 17 seconds later, it was Brooks again bringing the crowd to its feet as he embraced a dart from Ramos on a deep out before shaking loose from a defender and then hightailing it down the right sideline for a whopping 91-yard scoring connection. Before he was done, Brooks would finish his night’s work with a staggering 281 receiving yards.

However, OG was of no mind to quit and answered less than three minutes later when Villalobos spotted running room up the middle, executed a sharp cut and then outran Esco defenders to the end zone for a 13-yard TD scamper.

With mounting momentum now clearly behind them, the Pats began making things really interesting when they found paydirt again just eight seconds into the final quarter. Displaying great concentration, the indefatigable Patterson skied between a pair of Cougar DBs and somehow managed to latch onto a Villalobos pitch from 27 yards out. Suddenly the margin had been reduced to 42-29 with almost a full 12 minutes remaining – more than enough time for OG to perhaps make it all the way back.

And after its defense forced a punt, OG regained possession with a real chance to narrow the margin even further but a Villalobos throw over the middle was picked off and that basically sealed the deal.

Any doubt about the end result was removed on the Cougars’ next series when the home team advanced 53 yards in 10 plays thanks in large part to a fake punt, a critical personal foul penalty against the Pats and Ramos’s 11-yard touchdown run in which he got outside of OG’s containment and hustled into end zone untouched.

It hard to imagine Ramos playing any better. He was poised throughout the proceedings and his reads were spot on. He also scrambled to great effect and constantly frustrated the OG defense with his propensity for coming up clutch. But most of all there was his pinpoint passing. His marksmanship on intermediate and long patterns was uncanny with throws that were zipped and lasered. There was absolutely no denying that Ramos was in a zone on this many-splendored night.

And yet even in defeat, the Pats had a hero of their own. Whether he was operating from the backfield, situated in the slot or split out wide, the gifted Patterson was literally all over the field while making impactful totes and catches. What was perhaps even more impressive than his overall production (286 total yards) was Patterson’s sheer stamina. With all the running he was doing from the various positions from which he was deployed, it seemed as if he had traversed the equivalent of a marathon. “He just loves to compete,” said his coach/father Jason. Bordman was also quick to praise the OG star. “The guy is one of the best players around. He’s a beast.”

In the aftermath of what he considered to be an important victory, Bordman saw plenty of positives. “Hey, that’s a really good football team that we beat,” he said. “This win will help us refocus and prove how good we can be when we play fast, physical and don’t make mental mistakes.”

And if Robbie Ramos can continue playing at an elite level like he did on Friday, that could make the Cougars the baddest cats for miles around.