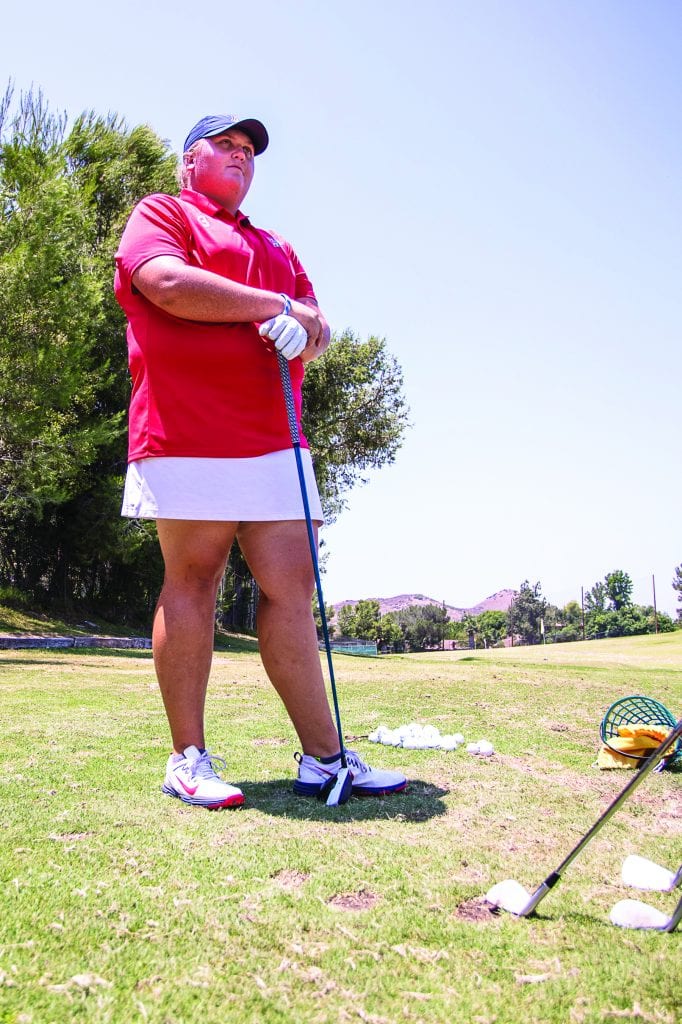 Escondido resident and U of A golfing standout Haley Moore stood tall in leading the Wildcats to an NCAA championship.

Escondido resident and San Pasqual High graduate Haley Moore continues to do some wondrous things whenever a golf club is placed in her hands.

The latest illustration came on May 23 when the University of Arizona junior confidently stroked in a birdie putt from approximately six feet that secured for the Wildcats the team title in the 2018 Division I NCAA Championships held at the Karsten Creek Golf Club in Stillwater, Oklahoma.

Moore’s uber clutch putt came on a sudden-death 19th hole and helped produce a birdie that will forever live on in the annuals of U of A golf.

The Wildcats entered this premier team event very much an underdog. After all, U of A had finished just third in the Pac-12 Conference Tournament and fourth in the NCAA Regionals, so expectations weren’t exactly high for the squad from Tucson.

Seeded-eighth, the Wildcats needed a dramatic eagle putt from Bianca Pagdanganan on the last hole of stroke play just to make it into the match bracket. But once there, the ‘Cats caught fire and would prove themselves to be big-time spoilers. U of A was about to go on one improbable run.

In a quarterfinal match, Moore and her mates sprung a huge upset when they took down top-seeded UCLA by a count of 3-2. And then in the semis, the Wildcats sent No. 5 Stanford packing with a decisive 4-1 triumph.

Despite having reached the finals, however, the odds still seemed mighty long that the ‘Cats could pull off another stunning surprise, this time against No. 2 seed Alabama, a team that came into the NCAAs sizzling hot and on a roll.

But after four matches, matters were all squared at 2 apiece and it was left to Moore, given the heavy responsibility of holding down the anchor spot, to provide the shots that would prove to be the difference. Not only did she respond to the pressure but the gifted 20-year-old would also do so in a most dramatic way.

Tied with the Crimson Tide’s Lakareber Abe after regulation, Moore and her game opponent went to an extra hole by replaying the par-five 18th. After each drove the fairway, Lakareber’s second shot found a fronting bunker while Moore’s came to rest in some rough at the back edge of the green. Lakareber’s blast from the sand got her inside 10 feet but Moore’s serviceable chip brought her even closer. And when Lakareber missed on her birdie attempt, the stage was all set for Moore to play the starring role.

After replacing her ball and taking a last look at the hole, Haley took little time before smoothly contacting a putt that would find nothing but the middle of the cup. Then came the joy, the emotional on-the-green celebration with teammates and finally, the tears. Moore had clearly carved out a place for herself in the lore of women’s college golf.

Moore, with a perfect 3-0 record in match play, had been a major reason why the Wildcats had captured their third NCAA championship while becoming the first-ever No. 8 seed to run the table.

A terrific talent who can exhibit power, accuracy and touch, Moore was the Wildcats’ top-ranked golfer this season, climbing to the No.22 spot in the college rankings.

Imbued with a relentless work ethic and getting stronger and fitter with each passing year, it’s expected that Moore will continue to make headlines and solidify her standing as one of the top amateur golfers in the country.

Having already showcased her considerable skills at the junior and college levels, Moore understandably has intentions on joining the ranks of the LPGA once she graduates next May. And based on the impressive way that she rose to the occasion in Oklahoma and stamped herself as clutch player who can meet the moment, that seems like a virtual certainty.