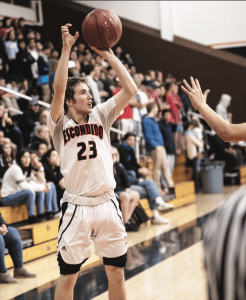 A focused Wes Jones unloads one of his signature 3-point bombs.

December 29, 2017 was to be a fateful day for both basketball standout Wes Jones and for the team of which he was such an integral part, the Escondido High Cougars.

As a result of what happened on that date, things would never ever be the same – either for Jones or the Cougs because a most unfortunate accident with far-reaching repercussions was about to cast its dark shadow.

In the second quarter of a tournament game versus Mira Mesa, Wes and an opposing Marauder player skied into the air to contest a loose ball that had been saved from along the left sideline near the Escondido bench. Seemingly leaping as high as he could, Wes outfought his foe and seized control of the rock but ominously, he got tangled up with his counterpart.

Not too far from the top of the key and just beyond the 3-point arc, Wes began falling backward, ball in his possession but unable to control his descent. It wasn’t long before he absorbed a nasty fall, his head and neck slamming off the floor. Some of those in attendance winced and audibly reacted to what they had seen.

A gritty competitor who has a lot of old-school toughness in him, Wes’s first reaction was to attempt to rise quickly, regardless of what he may have been experiencing physically. “I’ve got to get up,” he told himself.

After turning face down and then rolling over on his right side, Wes managed to get to one knee and slowly he elevated himself. Soon he was standing, though somewhat shakily, as his concerned head coach Paul Baldwin looked on.

Wisely held out for the rest of the game for precautionary reasons, initially it appeared as if Jones, despite the frightful nature of his fall, might rebound quickly and not miss any games. “I expected to be fine and be able to play the next day,” Wes recalls.

But the following morning, Jones woke up clearly not up to snuff. There was neck discomfort, lightheadedness, light sensitivity and some tingling sensation. Though no one could have possibly predicted it at the time, the balance of Wes Jones’s senior season as well as his distinguished prep career was over – done just like that.

At an urgent care facility, his symptoms began to worsen. From there a doctor referred him to an ER and ordered a transport via ambulance. Concerned about a possible cervical injury, a C-collar was placed on Wes to stabilize the neck and ensure that movement in that area would be minimized.

At Sharp Hospital  located in Kearny Mesa, a CT scan and X-rays were performed. Fortunately, no structural damage was revealed although there was no mistaking that  Jones had suffered a telling blow that manifested itself in the form of a concussion as well as whiplash. He was then instructed to have a follow-up examination with a regular doctor.

Eventually Wes was referred to a chiropractor/neurologist who specialized in concussions. The initial diagnosis suggested that he wouldn’t be cleared to return to action for at least 21 to 28 days—at which time he would be reevaluated each week after that.

And although there was incremental improvement taking place, the healing process became an extended one with symptoms such as headache, tired eyes and sensitivity to certain stimuli continuing to linger. Eventually, Wes was able to ease his way back into doing some body weight exercises such as pushups and squats but only with the proviso that he immediately stop should he experience any unease. By now, it was readily apparent that the pace of his recovery would not allow him to return to the court before season’s end.

Moreover, because of Wes’s condition, it was determined that it was in his best interests that he no longer attend class but rather go online to keep current with his school work. By doing this, Wes could comfortably go at his own pace and take necessary breaks whenever needed since he wasn’t allowed to study more than two hours per day. It is an arrangement that, in his words, has worked out “pretty good.”

For any young athlete, but particularly an accomplished one like Wes, having a senior season significantly truncated due to injury is a tough cross to bear because so many hopes and expectations are tied up in that one final year. “At first, it was really hard not being able to play much because I really did want to go out with a bang,” Wes explains but after pondering what he had just said, he flashed an easy smile, chuckled a bit and showed that his sense of humor was very much intact when he added, “But I guess in a way, that’s exactly what I did.”

However, no one would blame Wes if he felt a bit cheated or cursed his bad luck. The 5-10, 145-pound shooting guard was coming off a stellar junior season in which he averaged nearly 15 points a game, shot a brisk 85% from the free throw line and was an absolute dynamo from long-distance.

A southpaw who could spot-up, get into a fluid rhythm and then release the ball with a quick flick of the wrist, Wes proved to be a remarkable shootist as he made the trifecta from downtown his signature shot. Seventy-four times in 2016-17, Wes hit from beyond the arc and was a huge weapon in Escondido’s offensive arsenal. “Yeah,” he agrees, “there’s no doubt that my shot was my biggest asset. I felt pretty consistent with it.”

But Wes was hardly a one-trick pony. A committed hustler imbued with plenty of stamina, he possessed multiple skills that evidenced themselves in his ball handling, passing and ability to get timely rebounds. Plus, his mindset and approach to the game were also very instrumental in helping him to succeed. “Though I think of myself as being really competitive,” he says, “I’m not a trash talker. I just focused on my game and let it do the talking for me.” As a result of his standout play, Wes earned first-team All-Valley League honors—the only junior to be so designated.

Very much looking forward to his senior campaign in which he hoped to help the Cougars capture a league title and perhaps repeat as an all-league performer, things were off to a positive start through the season’s first 13 contests. Not only was Wes continuing to score and do some serious stroking from the outside, but his overall game was really coming together—particularly his work at the defensive end. But then came the ill-fated fall and its disappointing ramifications.

What made the injury doubly devastating was how it impacted Wes’s team. In the immediate aftermath of his absence, the Cougs (15-13) lost four in a row. And though they rallied sharply to win the Valley League crown, there was no denying that Wes’s leadership, court awareness and scoring punch was sorely missed.

Nowhere was this more apparent than in Esco’s first-round Division II playoff game against Otay Ranch when then Cougs suffered a heartbreaking 69-67 loss. Rest assured that had Wes Jones been available, the outcome would have been decidedly different. In addition, his presence would have greatly added to the Cougars gravitas and made Esco a real threat to make a deep run in the postseason.

An interesting sidebar to the Wes Jones story is that even had he completed his senior year without incident, his plans included no more hoops. This reporter was somewhat startled by this revelation given Wes’s talents and the near certainty he could have competed, at the very least, at the junior college or lower collegiate levels. But Wes already had other things in mind. “Playing basketball just wasn’t going to be part of my future path,” he candidly admits.

When he reflects back on his time in a Cougar uniform, Wes will fondly recall his relationship with teammates such as Jacob Sauls and Mason Sines and the blast that he had whenever the team would take tournament road trips such as the one Esco made to Morro Bay this season. He also expresses his genuine gratitude and heartfelt respect for Baldwin, who shepherded Wes through three varsity campaigns. “He definitely taught me to work hard,” Jones says, “but he really stressed the fact that he wanted me to have fun whenever I was playing.”

The prognosis, both from a health and career standpoint, is quite bright for the soft-spoken Jones. Relatively soon, he should be completely sound, devoid of symptoms and without any physical limitations. As for his future vocation, Wes has found what he believes to be his true calling in the holistic field. It is something he’s extremely passionate about and he welcomes the chance to be of service and help to others.

In fact, Wes will be signing out of high school very shortly so that he can begin to taking classes/courses at Escondido’s Healing Hands Holistic School in April.

Demonstrating a maturity beyond his 18 years, Jones does not look back on his abbreviated senior season with any self-pity or lingering regret. He brings a refreshing perspective to what was an unfortunate circumstance. “When compared to my long-term health, missing part of a basketball season doesn’t seem all that important,” he says.

And so, despite the fact that an injury laid him low, deprived him of more memorable moments on the court and forced him to drastically alter his lifestyle, Wes learned and truly grew from the experience.

Confronted with an adversity that indeed tested him, Wes rose above it and emerged a stronger, better and more equipped human being. He simply refused to allow a disheartening injury to defeat him.