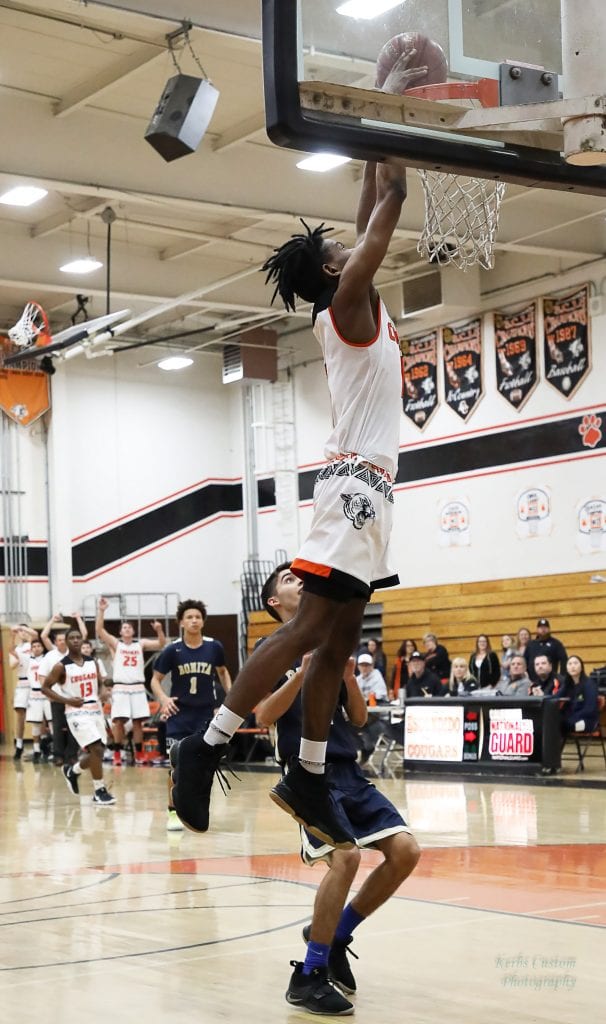 Both before and during last Friday night’s Division II CIF quarterfinal playoff game between Bonita Vista and host Escondido High, the Cougars were confronted with a number of challenges.

The question was could they ultimately overcome them?

To begin with, Esco was forced to take the court without their gifted point guard Julian Hutchinson. A third-quarter knee injury suffered during a previous 70-62 postseason win over Mira Mesa had rendered him unable to answer the bell. He certainly made for a forlorn sight as he sat towards the end of the bench, sadly resigned to the fact there was nothing he could do to aid his team’s cause.

Make no mistake, Hutchinson’s loss was a major blow to the Cougars. The active sophomore can penetrate and score, dish with aplomb and get after it on the defensive end. And that doesn’t even take into account his penchant for the coming through in the clutch. Being without such a weapon made Esco’s task against the Barons all the more difficult.

And once the game began unfolding, other obstacles began manifesting themselves. The Cougars experienced a sluggish and uneven first half. In addition, they were having issues defending the athletic Barons, thereby making them vulnerable to forays to the hoop.

Then there was the frustration of not be able to covert on a number of high-percentage shots from in close, including a bunch of layups. Finally, came another downer when junior guard Brandon Goedhart, whose relentless aggression down the stretch had been invaluable, fouled out at a most critical time. It would be an understatement to say his loss wasn’t consequential.

But before the officials sent Goedhart to the bench, it appeared as if the Cougs were nonetheless going to rise above all that had stood in their way and come away with a victory. When a swished Goedhart free throw gave Esco its first lead (53-52) since early in the second period, things looked promising. What’s more, after drawing a foul on a nifty spin move, Goedhart extended the Cougars margin to three with two more charity tosses that hit nothing but net.

However, this would prove to be Cougs last hurrah as they were outscored 6-0 from then on until the final buzzer as the visitors from Chula Vista eventually secured a compelling 58-55 victory.

On what might have been the game’s defining possession, Baron point guard Morris Stokes penetrated the lane and induced Goedhart to commit the telling foul that would eliminate him. As calm as you please and totally unruffled by the home crowd’s boisterous attempt to rattle him, Stokes sunk a pair of free throws that closed the gap to within one.

Shortly thereafter, smooth DJ Sanders tallied on an open drive to the hoop that allowed BV to reclaim the lead. A subsequent turnover by the Cougs proved devastating and when the unflappable Stokes cashed in two more free throws to give the Barons a three-point edge, Esco was up against it.

And yet, the hosts still had one more possession to try to square things but the execution was lacking. As a result, Esco’s backcourt star Jacob Hutchinson was forced to settle for a contested 3-point attempt that was offline to the right. When it missed, the Cougars’ 12-game winning streak as well as another notable campaign had come to a heartbreaking end. 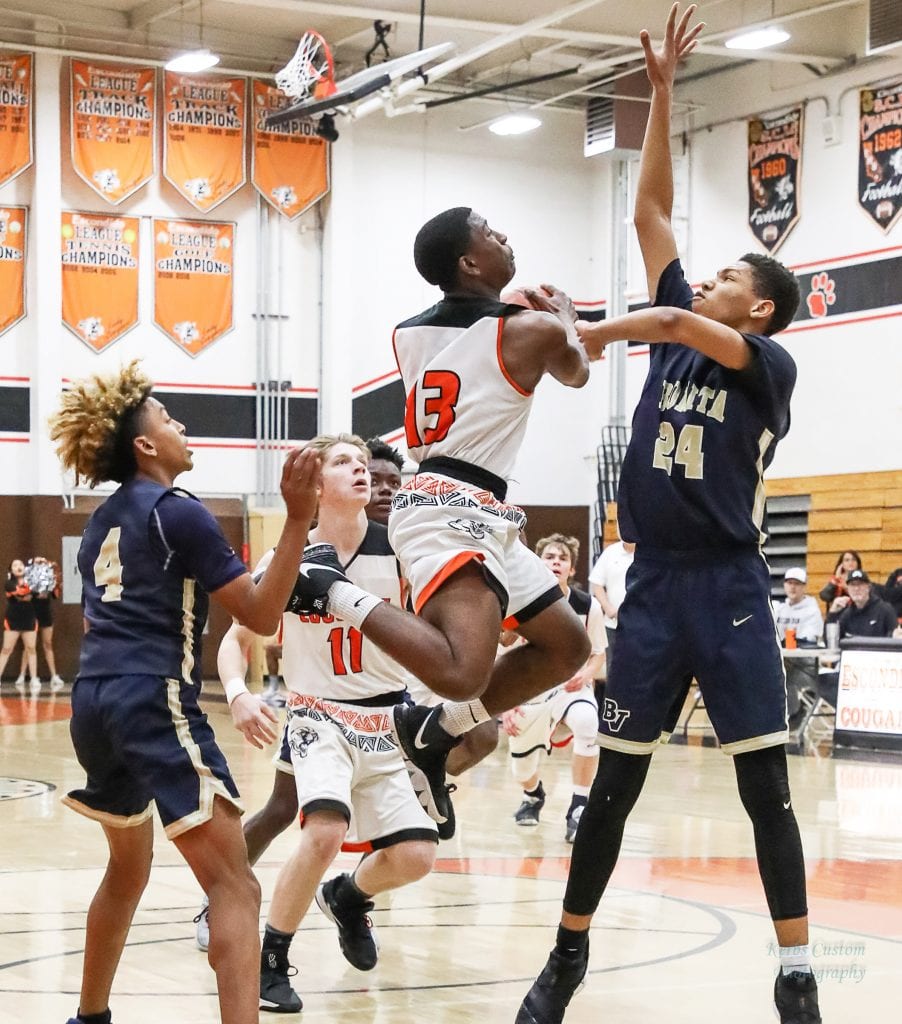 Isaiah Thomas, shown here penetrating down the lane versus Bonita Vista, gave the Cougars a key lift off the bench. Photo by Lenny Kerbs

With their hard-fought victory, the Barons improved their overall record to 12-17 and move onto the semifinal round where they will take on No. 3 seed Carlsbad. Meanwhile, Esco’s season concludes with a very commendable 19-11 ledger.

Though the loss certainly stung, Esco coach Paul Baldwin offered a broad perspective in its wake. “Yes, this one hurts but we had a really good season,” he said. “We came back from a 7-10 start to win 19 games, won the Valley League where we went undefeated (10-0) and went on a 12-game winning streak. I think we had a successful year.”

Then turning his attention to the game with BV, the highly respected coach gave a brief summation. “It was disappointing because we just didn’t play well in the first half,” he began. “And missing so many layups was really frustrating. Also, not having Julian at the point created a glaring hole for us.”

But Baldwin was also quick to acknowledge the effort of the Barons. “Hey, give them lots of credit. They played really well. And defensively, there were just too many times where we couldn’t stay in front of them.”

Though the Barons entered the fray as a 15-seed, that ranking was a complete mirage. A quick and determined team that had been steeled by a tough schedule and competing in a formidable league, BV loomed as a dangerous opponent. That was verified to the max when the Barons  took out the touted No. 2 seed Westview by a convincing 66-52 count in the first round. As Baldwin noted, “You don’t beat a team like Westview without being pretty darn good.”

Both teams got off to a somewhat slow start in the first quarter that ended with Esco up 13-11. Big man Jacob Sauls came off the bench to give the Cougs a big lift with a pair of blocks and a dunk that had the local fans roaring their approval.

However in the second stanza, the Barons began finding the mark with Sanders setting the pace. The mature sophomore went on a 10-point scoring spree that included a layup, an artistic flight down the lane, a left-handed finish at the rim and a trifecta bomb from straightaway. The 31-26 halftime advantage established by BV would have been even more substantial if not for the work of Coug reserve Isaiah Thomas who keyed a 6-0 run with a driving layup and a terrific feed to Goedhart.

By the time the third quarter had concluded, Esco had closed to within three, thanks in large part to a sensational one-man performance by the wondrous Hutchinson. Knowing that his team desperately needed him to step up if it was to remain in the hunt, “Hutch” simply took over. First there was a sweet pull-up jumper on the baseline. Next came a high-arching trey from the corner that looked as if it might actually hit the rafters. That was followed by another downtown bomb from the left side. An elbow jumper on which he was fouled (of course he made the free throw,) kept this impressive parade of points coming. And a fitting capper was provided by a delicate floater that seemed as if it was drawn to the net. Hutchinson had authored a 13-point masterpiece that not only reinforced his status as a grand player but provided a lasting memory for all those Esco boosters lucky enough to witness it. “He was an absolute monster out there,” praised Baldwin.

In the final quarter, the Cougs finally knotted things up at 47 apiece on a Chris Landry bucket from in deep. Wasting a golden opportunity to surge in front, Esco couldn’t deliver on its next two possessions. Shortly thereafter, Baldwin’s club found itself in arrears once more. But in the last dramatic act of his stellar prep career, Hutchinson drained a step-back shot from so far out that it was postmarked from another zip code. That again created a deadlock (52-52) and set the stage for the riveting ending previously described.

Scoring balance played a key role in the outcome with Sanders (19), Stokes (14) and Adrian Wade (11) registering in double figures for the victors. As for Esco, Hutchinson’s 24 points were huge but he could’ve used more help, with Goedhart (nine points) the only other Cougar player to make a serious dent on the scoring sheet.

Being on the short end also means that Esco must now say goodbye to a senior class that includes the heralded Hutchinson and the grinder Landry, who epitomized competing and hustling your ass off.

Yes, in the end Esco wasn’t able overcome all the obstacles that were thrown in its path. But damn if the Cougs didn’t come close! And if just a circumstance or two  had been slightly altered, it most likely would be the Cougs moving on to chase a championship. It’s hard not to envision a different result if Goedhart hadn’t fouled out or if just a couple more layups had been converted. Certainly a pair of additional stops would have done the trick. And there’s absolutely no need to speculate about what would have happened if Julian Hutchinson had been available.

For sure, the Cougs experienced a fine season. But it was ever so near to being something great. 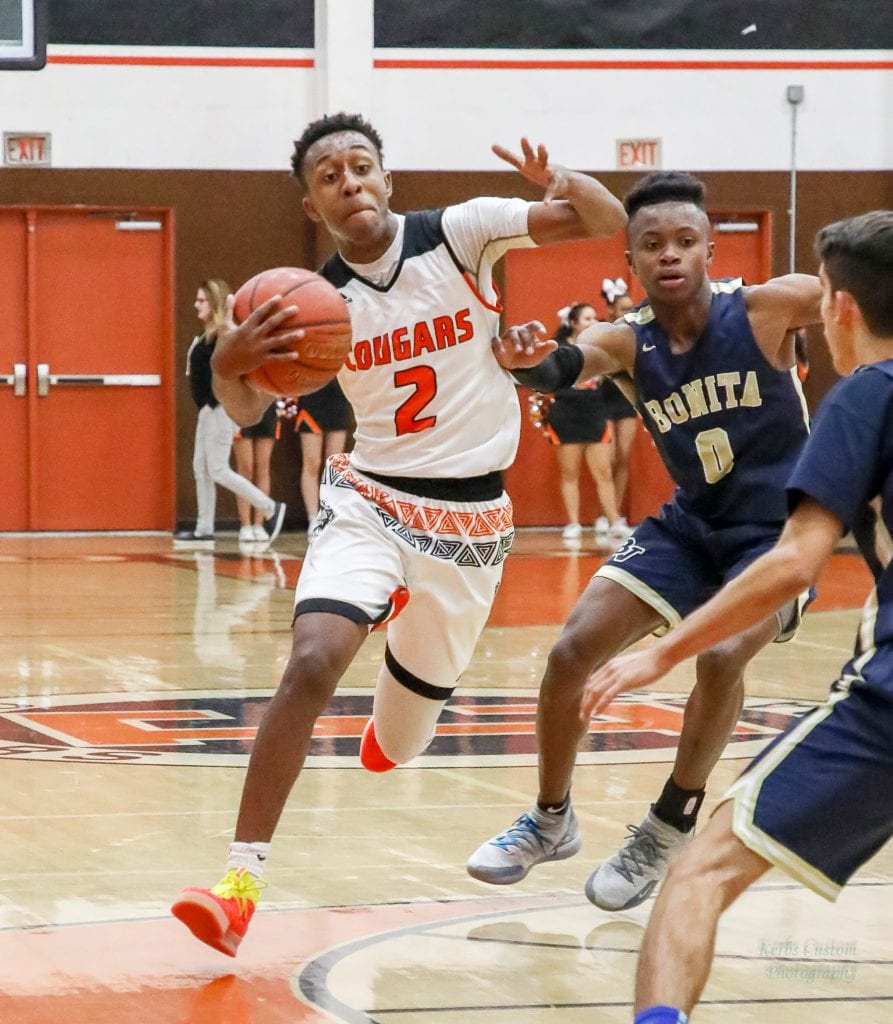 Esco star guard Jacob Hutchinson blows past BV’s DJ Sanders on his way to the hoop. Photo by Lenny Kerbs