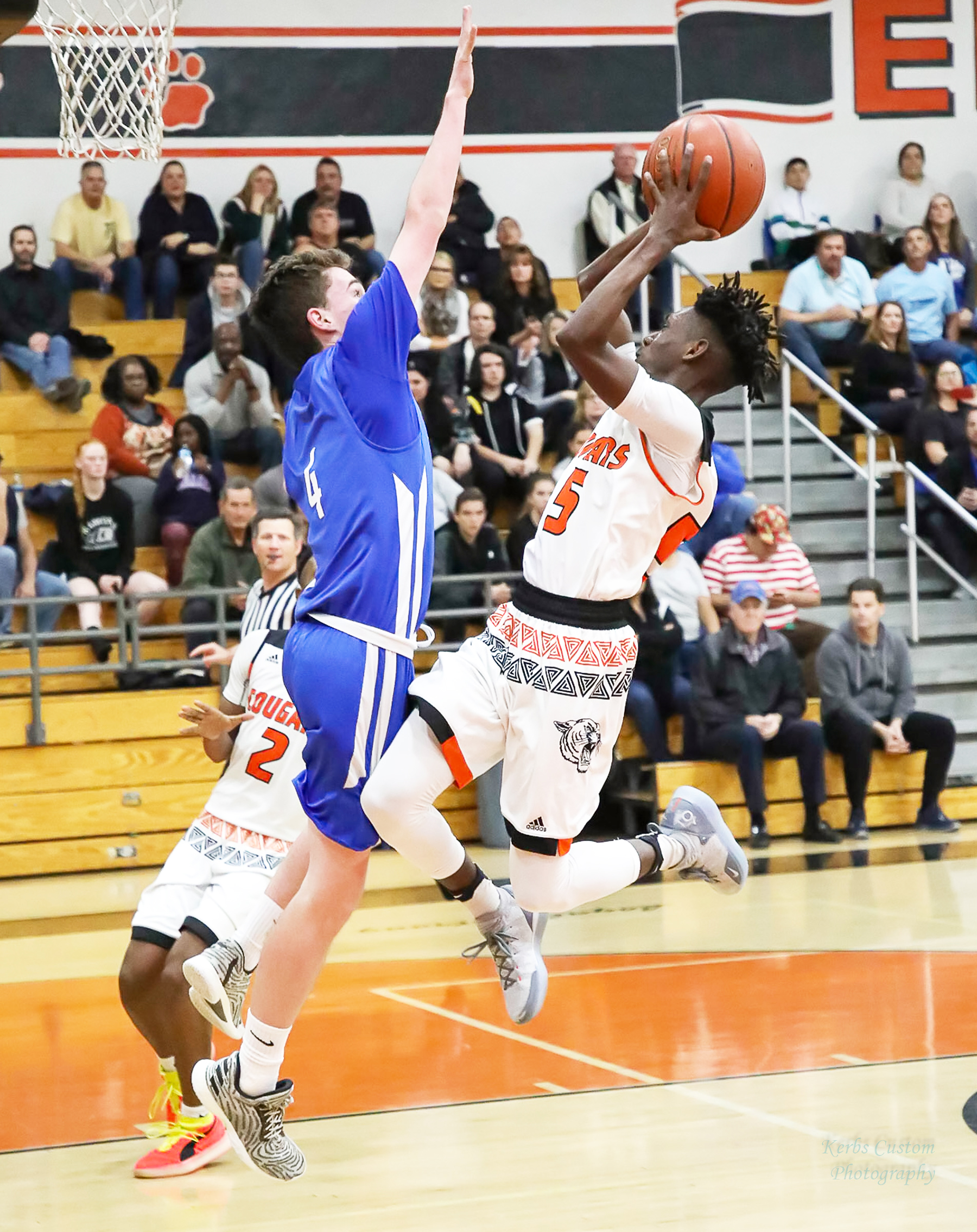 The acrobatic Julian Hutchinson shows some serious hang time as he hoists a shot over the outstretched hand of Ramona’s Moe Austin. (LENNY KERBS/T-A)

Not only were the Cougars (16-10) attempting to extend a lengthy winning streak but more importantly, head coach Paul Baldwin’s crew was trying to all but lock up a second consecutive Valley League crown.

Though the accomplished Baldwin was a bit annoyed over a careless Coug turnover that allowed the visiting Bulldogs (14-11, 6-2) to take a 46-45 lead heading into the final quarter, he nonetheless was confident about his team’s position. “I felt we were right where we wanted to be,” Baldwin said.  Why, it was almost as if the Esco coach knew beforehand what was about to happen. Suggesting he might be somewhat clairvoyant, perhaps he actually did.

Because not only did his team answer the call, they emphatically put the hammer down while blitzing the dazed Bulldogs 27-16 in the final eight minutes. The end result was a 72-62 win that upped Esco’s winning skein to nine, kept its unbeaten record (8-0) in the VL intact and for all intents and purposes secured another league title. The rolling Cougars haven’t tasted defeat since late in December when South High from Anchorage, Alaska got the better of them.

The contest with Ramona was decided in what seemed like a flash when the Cougs scored the first eight points of the fourth stanza. Esco’s stellar guard Jacob Hutchinson was the igniter when he drained a trey from the right side. Then it was senior Justin Fox who came through by muscling in a tough shot while being tightly guarded. The capper to this determinative run came when freshman Nick Payne hunkered down in the right corner and stroked a sweet 3-pointer that put the hosts on top 53-46.

From there, Esco appeared to be firmly in control, although the Bulldogs did close to within four before Brandon Goedhart’s sensational spin move highlighted a 3-point play, sophomore Julian Hutchinson went off glass and active Chris Landry put home a follow-up. That flurry gave the Cougs a 61-52 edge and basically put the game on ice.

In a display of remarkable balance, six Cougars scored in the conclusive quarter with five of them registering at least four points.

Entering Friday evening’s fray, it had been definitively established that these were the Valley League’s two top teams. And the Cougars were fully aware that if they could down the Bulldogs a second time – having already bested them 78-67 just nine days before – a VL championship would basically be in their hip pockets.

As for the Bulldogs, a scrappy, hustling and well-coached outfit, they were looking to spring the upset that would deadlock them for the league lead and intensify their dreams of a possible title run.

Everyone involved from both sides was anticipating a hard-fought tussle considering that this was arguably the VL’s most critical and defining game. And sure enough, that’s exactly what went down.

The Cougs forged a 15-10 margin after the first quarter thanks to in large part to seven different players contributing to the scoring column. But that lead was trimmed to a mere two at the half (27-25) because hard-working Bulldog forward Derek Newman stepped up with six points that included an artful hoop from behind the basket.

Then early in the third period, the Bulldogs seized the advantage (36-32) in dramatic fashion when Jaedon Gotowalu went off on consecutive possessions by burying a pair of trifectas. The first of those hoops was the result of scintillating ball movement in which every member of the Bulldogs touched the rock.

But in what was a seminal moment of the contest, Esco’s clutch Jacob Hutchinson immediately answered with a nifty flip shot that came at the end of an aggressive drive to the hoop. Better still, the senior guard was fouled on the play and he calmly drained the charity toss for a conventional 3-pointer. And when teammate Fox tallied on a determined putback of his own missed shot, just like that the Cougars had jumped back on top.

One wonders where Esco might have been without Hutchinson’s third-quarter heroics. His nine- point spree also included a touch shot in the lane and a brace of layups, one of which was of the twisting variety. 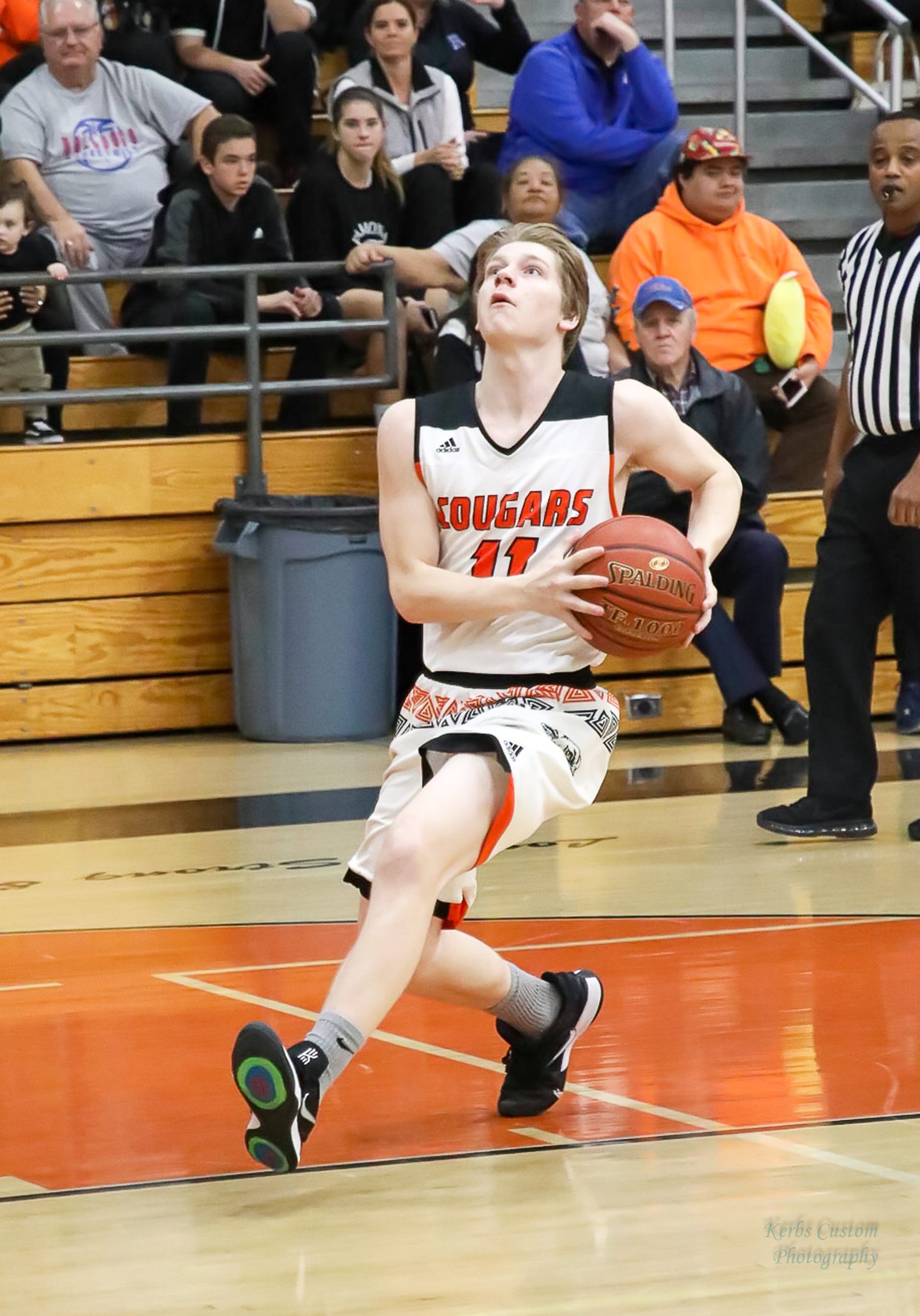 Esco guard Brandon Goedhart is totally focused on the hoop as he prepares to go up for a layup against league rival Ramona. (LENNY KERBS/T-A)

All that served to set up an eventful stretch drive that was highlighted by Esco’s quick eight-point burst, its scoring distribution, an assertive man-to-man defense and a hounding press. “We extended our pressure and that definitely gave them some trouble,” explained a pleased Baldwin. “Down the stretch, we were turning them over.” By the time the final buzzer had sounded, the Cougars had harassed the Bulldogs into numerous empty possessions.

The fourth quarter also featured the dynamics of another talented Hutchinson, this one answering to the name of Julian. The younger brother of Jacob, this burgeoning guard made like a whirling dervish as he tallied eight points off an assortment of shots that included an incredible over-the-shoulder flip, a nifty spin move and an assertive leap to the basket. Baldwin couldn’t help but marvel at the performance of a potential star-in-the-making. “Julian was just a monster out there,” praised his coach, “he played out of his mind.” Though the older Hutchinson paced the Cougs in scoring with 20 points, his precocious sibling wasn’t far behind, finishing with a pivotal 18.

Don’t look now but with their speed and quickness, daring forays down the lane and all-around acumen, the “Hutch Bros” have become one of the North County’s most dangerous and exciting backcourt combinations.

Though playing a tough and challenging non-league schedule has certainly contributed to Esco’s notable development and viability, so has a philosophy/mantra that Baldwin conceived. Call it the “One Percent” approach—and has it ever been reaping a nice payoff!

Let the coach explain the theory behind it: “Simply stated,” begins Baldwin, “we’ve made a group commitment to get one percent better each and every day, whether it’s at practice or during a game. The kids have really embraced the concept and there’s only been one day in January where we really didn’t meet that goal.”

And the results that have been achieved more than speak for themselves. For example, over the course of their current nine-game unbeaten streak, six of those contests were won by 20 or more points with only one having been decided by less than double figures.

Determined not to look ahead, the Cougars expect to stay focused as they wrap up their regular-season schedule this week with tilts against VL opponents Mission Vista and local rival San Pasqual. After that, it will be onto the Division II playoffs where the Cougs figure to provide a formidable test for any school they may encounter. “We’re capable of beating anybody on a given night,” says Baldwin.

Given the way that Esco is currently sizzling, you won’t find many who would doubt the veracity of that statement.