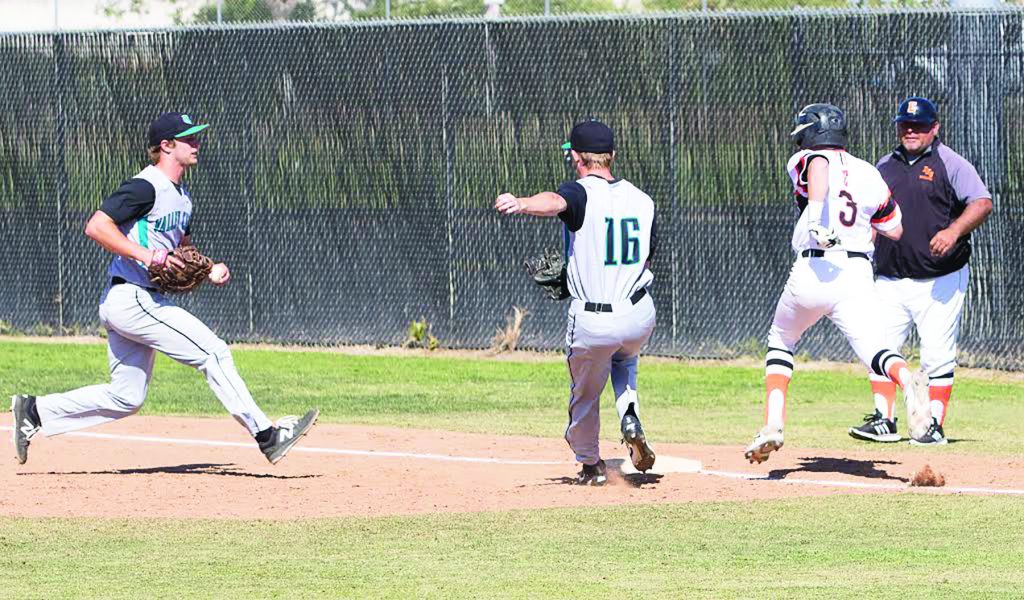 Under the direction of accomplished baseball coach Aaron Hoorfard, Escondido High has developed a culture that demands that certain critical aspects of the game be emphasized and then executed.

“Our goal is to get it done with good pitching, by playing solid defense and then coming up with timely hitting,” says Hoorfard of his team’s overarching philosophy and approach.

Over the last few years, this formula has paid huge dividends and turned the Cougar program into one of the most consistent in all of the North County. Last season for example, the Cougs won 26 times (including a 16-game winning streak) and made it all the way to the Division III semifinals. This year their sights are set on even greater ambitions. And by once again following its tried and true blueprint, Esco is right back on track to have another dominant campaign.

On Monday afternoon, in a contest against visiting Valley Center High, the formula was clearly in evidence. Behind the stellar two-hit, nine-strikeout pitching of tall right-hander Jacob Moskowitz, a flawless defense that ably backed him and a cluster of hits coming at just the right time, the Cougs captured their Valley League opener by a final count of 3-0.

With the win, Esco moved its overall record to a sparkling 10-2, upped its home slate to 6-1 and recorded a remarkable eighth shutout on the year. Things have not been as rosy for the game Jaguars whose determined play in a losing effort earned the praise of Hoorfard.  With their latest setback, the Jags’ ledger fell to 1-9-1 and extending their current losing streak to five. 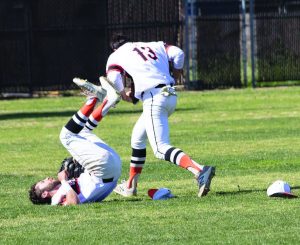 Esco left-fielder Raymond Sanchez (left) collided with shortsop Kellen McCoy (13) as both pursued a pop fly. But though momentarily shaken up, McCoy managed to hold onto the ball.

Much of what transpired on the Cougars’ home field was initiated and finished by the dealing Moskowitz. In truth, he was never really threatened throughout his seven-inning masterpiece. Clearly in command, five times he retired the side in order while never allowing a runner to advance beyond second base. Impressively hitting his spots, pitching to contact and revving it up when necessary, Moskowitz was nearly untouchable.

Without a doubt, “Mosko” makes for an intriguing visual on the mound. Neatly turning on the rubber before showing his back to the hitter, Jacob then releases from a three-quarters delivery. The owner of a nice array of pitches that range from a deceptive fastball, to a sweeping curve and tricky changeup, the Esco pitcher had VC off-balance and for the most part, unable to time his assortment of offerings.

Even more telling was the fact that Moskowitz grew even more overpowering as the game progressed, retiring the last nine batters he faced, six of which he empathically punched-out. “He’s got that sneaky fastball, he can mix it up and today he was really effective by being low in the zone,” stated Hoorfard. 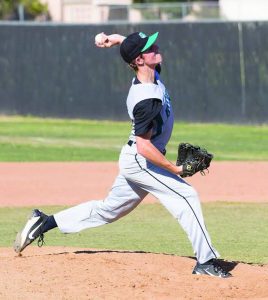 Now with a chance to help his own cause, cleanup hitter Moskowitz hit a bouncer to short that produced an RBI forceout at second and got Esco on the board at 1-0. Next up was the dangerous Hunter Bean, who has legitimate power, and sure enough he put a charge into one towards the gap in left-center. And though hit a fair piece, the ball was definitely playable and probably should have been caught. But with outfielders Tuupash Turner and Alex Hakes converging, a moment of hesitation took place between them and the ball appeared to go off Turner’s glove which allowed two more critical runs to score.

The official scorer eventually ruled the play a two-base error and now with a 3-0 Esco margin and a locked-in Moskowitz getting even sharper, the outcome of this game was all but decided.

Offensively, the Cougs had been timely if not prolific and put together enough of a rally to spell the difference. Donnelly, who also legged out a hit, and outfielder Raymond Sanchez, who drilled a rope into right before lacing one the opposite way, paced the attack with two hits apiece. Moskowitz was the lone Cougar to get an extra base hit when he turned on a pitch and rocketed it into left-center field for a standup double. 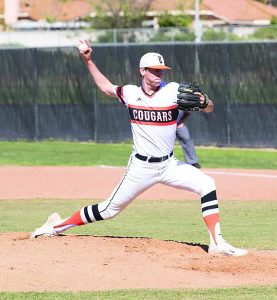 Cougar right-hander Jacob Moskowitz stymied the Jags with an artful two-hitter. All photos by Lenny Kerbs

The importance of being able to put that first league encounter into the win column wasn’t lost on Hoorfard. “It’s always nice to get off to a good start,” shared the coach. “This was a tough game. I thought Valley Center played well and competed hard. Every win in league is a big win.”

And in an interesting bit of scheduling, the Cougars and Jags will play twice more this week, on Wednesday and Friday afternoons by which time these two clubs should know each other exceedingly well. Hoorfard, blessed with a deep and solid rotation, has penciled in right-handers Bean and Juan Cervantes for those respective starts.

Undoubtedly, the Jags will counter with their ace Brock Moffitt for one of those contests, most likely the most immediate one.

And while the Cougs will look to continue their season long roll, the Jags must accentuate the positive and draw encouragement from putting up a solid effort against a highly regarded foe like Esco.  This is a VC team that has more than sufficient talent to reverse its current fortunes and make some noise in the VL if its bats start coming alive and if its belief doesn’t waver. One senses that all it will take for the Jags to turn the corner is to simply taste victory once again and have something tangible to hold onto. If the Jags can somehow steal one of these upcoming games from the Cougars, the boost from such a win could be significant if not season-changing.

But for the time being, the Jags will have to go on searching for a winning prescription that will best suit them. The Cougars have already discovered theirs. And damn, if it isn’t working to a tee!