Escondido’s Rosas expects to be a force in MMA 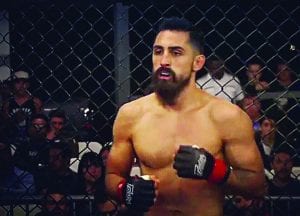 In stellar shape, Rosas expects to deliver a big effort in his upcoming bout versus Michael Reyes.

In all likelihood, most folks in Escondido have probably never heard of Victor Rosas. But very soon that may all change.

For on September 2 at the Citizens Business Bank Arena in Ontario, California, the 28-year-old mixed martial arts fighter will be part of a high-profile event entitled King of the Cage. Scheduled to face Michael Reyes in a flyweight bout, Rosas, who currently weighs in at a cut 125 pounds, is advantageously positioned to make a significant career jump should he come out on the winning end of what could be a defining match.  Get the better of Reyes and Rosas might well be on his way to realizing his ultimate ambition, which is to become a part of one of the two elite MMA promotional organizations, either UFC or Bellator.

And Reyes had best be ready to bring it because Rosas is locked in and loaded. In superlative shape, motivated to the max and driven to make a name for himself as a professional athlete, Rosas gives off the vibe that he won’t be denied. Supremely confident but not cocky, the 5-foot-7 native of Escondido is a true believer in his skills and fully expects his showdown with Reyes to be a springboard towards the upper echelon of the MMA circuit.

Rosas is a quintessential example of a local boy striving to make good. Born at the now shuttered Palomar Hospital off of Valley Parkway, he has spent three-quarters of his life residing in his hometown. Seemingly always demonstrating a natural athletic bent, Rosas played football as well as wrestled at Escondido High before moving on to the Coachella Valley after his sophomore year.

It was there that he decided to narrow his focus and concentrate on one sport. Somewhat surprisingly, that turned out to be boxing. Though he had done nothing but some street fighting growing up, Rosas’s swift hands, movement and natural instincts made him a good fit for the art of fisticuffs. Stepping into the ring as a lightweight at 130 pounds he showed some real promise during his amateur career.

However, his parents wanted him to focus on his studies in high school and so boxing was put on the backburner. Upon earning his diploma, Rosas became certified in massage therapy and made a living as a private contractor in that profession. But he was feeling restless. “It was good work” he says, “but I didn’t feel fulfilled. It wasn’t what I really wanted to be doing. Growing up, I had always wanted to do something in sports and be a professional athlete.”

Returning to Escondido, Rosas connected with some friends who were involved with mixed martial arts and knowing his background, they urged him to give it a try. Soon he and his good buddy Mike Andaya were finding open mats in the North County and San Diego where they could train for free. A gym once located on Lincoln Parkway became one of their haunts.

It wasn’t long before Andaya and Rosas got together and created a modest little gym of their own with some rather Spartan equipment. By this time, Rosas was beginning to catch the MMA bug and started getting hooked on the sport. Besides taking classes in Brazilian jiu-jitsu and kickboxing, the cerebral Rosas began devouring books on the subject in addition to viewing countless YouTube videos to further acquaint himself with this most physical and demanding of endeavors. 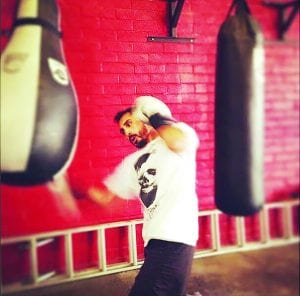 Escondido’s Rosas demonstrates one of his biggest assets, his notable punching power.

Then one day out of the blue, Andaya announced that he had arranged for Rosas and himself to participate in a small amateur promotion in San Diego. Rosas was taken aback, if not downright stunned by his friend’s revelation considering the fact that neither one had any real formal training in the sport. Nonetheless, the two amigos proved they more than belonged, each winning decisively. “Man, we destroyed those guys,” Rosas smiles when reflecting on the memory. From then on, Rosas saw mixed martial arts as his most likely avenue to satisfy his sports itch.

For over two years, he toiled in the amateur ranks, racking up a 4-2 record in which he won two bouts in less than one round and earned another victory by submission.

Feeling he was prepared to take the next step, Rosas then elected to go pro. “Because you’re training so hard and the fact that I consider fighters like myself to be entertainers and modern-day gladiators,” he explains, “I just thought why not get paid for doing it.”

His first bout in the professional ranks resulted in a three-round unanimous decision over Atig Jihad. Less than four months later, Rosas again demonstrated his penchant for making quick work of an opponent when he employed a guillotine choke that forced Michael Mulverhill into a speedy submission just 35 seconds into the match.

In the last of his three pro fights to date, Rosas was pitted against a tough and skilled foe in Casey Kenney. Ultimately, Rosas was to suffer his first defeat when the attending physician at ringside signaled an end to the bout after a wicked elbow to his forehead resulted in a nasty cut that had blood streaming from it. Kenney was credited with a TKO with a mere 29 seconds remaining in the third and final round.

Though the loss was disappointing, there were mitigating circumstances that clearly affected the outcome. To begin with, Rosas had been battling the flu during the buildup week which left him shaky and killed his cardio conditioning. Making matters even worse, the Escondido product was forced to drop 15 to 16 pounds in a very compressed period of time so that he could make weight. While others might have bowed out and not competed when facing such adversity, the warrior in Rosas wouldn’t allow him not to honor a commitment – regardless of his compromised state. Deprived of his ability to react and respond quickly, Rosas was at a decided disadvantage because he simply couldn’t physically execute the way he wanted. But spent as he was, Rosas demonstrated his considerable heart by gamely battling on until the doctor ordered a stoppage. “I was so exhausted that a part of me wanted to quit on the stool,” he says, “but I just couldn’t do it. I told myself I had to keep going and try to finish as best I could.”

Having put that setback in the rearview mirror, Rosas is now totally focused on his upcoming duel with Reyes. Cognizant that a strong performance in Ontario will enhance his reputation and make him an attractive option for future bouts, he plans to showcase his full arsenal of skills.

Because of his boxing background, Rosas can be a dangerous striker who’s capable of generating thunderous power for someone his size. Technically sound as a puncher, Rosas can also flash the sort of hand speed that can befuddle an opponent.

When it comes to the ground game, Rosas knows how to get it done whether he’s working from up top or on his back. Adept at various holds as well as effective at using his elbows and knees to extricate himself, there aren’t many positions from which Rosas can’t operate. Being able to flip the script and create reversals is another Rosas plus.

And because of his attack mentality, notable strength and technical expertise, Rosas has the wherewithal to produce his share of submissions. In a nutshell, Rosas is an all-around practitioner who can come at you in a variety of ways – whether that manifests itself in the form of striking, kicking or grappling. Without a doubt, he has a multitude of weapons that can be unleashed whenever needed.

Just giving Rosas a quick once over is enough to know that here’s a dude in terrific shape. Chiseled and with hardly a speck of fat on him, Rosas looks hard and rock solid. And no wonder. Twice a day he engages in intense workouts that incorporate such elements as running, lifting weights, jiu-jitsu, kickboxing, work on the heavy and speed bags and so much more. It’s hard to imagine anyone being fitter or imbued with greater stamina than Rosas. 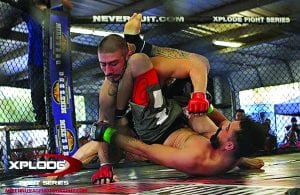 Even when he’s on his back, MMA fighter Victor Rosas is dangerous because of his ability to produce stunning reversals.

If all goes according to plan, Rosas will stay active by having a match every two or three months for the foreseeable future. And if the victories mount, so will his visibility and stature. “If I do well, I’ll certainly get paid more,” he says. “and with that goes a lot more publicity which is so important in trying to further your career.”

The bottom-line objective is to create sufficient enough buzz to where he will become an appealing prospect for either the UFC or Bellator. And though an ideal timetable would have that happening sometime within the next year-and-a-half, Rosas won’t be dissuaded if more time is required. “I’m not in a huge rush,” he says. “I’m still really young and I have a lot left in me. Believe it or not, I love doing this and I want it to go on for as long as it can. I truly want to see where all this is going to end up.”

Never satisfied, Rosas is a perpetual student of his chosen craft. “I’m always trying to get better, trying to progress and perfect my techniques. I’ll drill from all sorts of different angels in order to make me totally prepared. I’m always open-minded because I’m passionate about learning as much as possible.”

And his commitment and desire to excel remains as intense as when he first took up the sport. “I’m really going to push myself and continue to buckle down so that I can do something special,” Rosas says with conviction. “I’m going to make sure I do everything possible to live my dream of making it in sports and being the best I can be.”

Should he do exactly that, you can bet that most everyone in Escondido will certainly know of Victor Rosas.