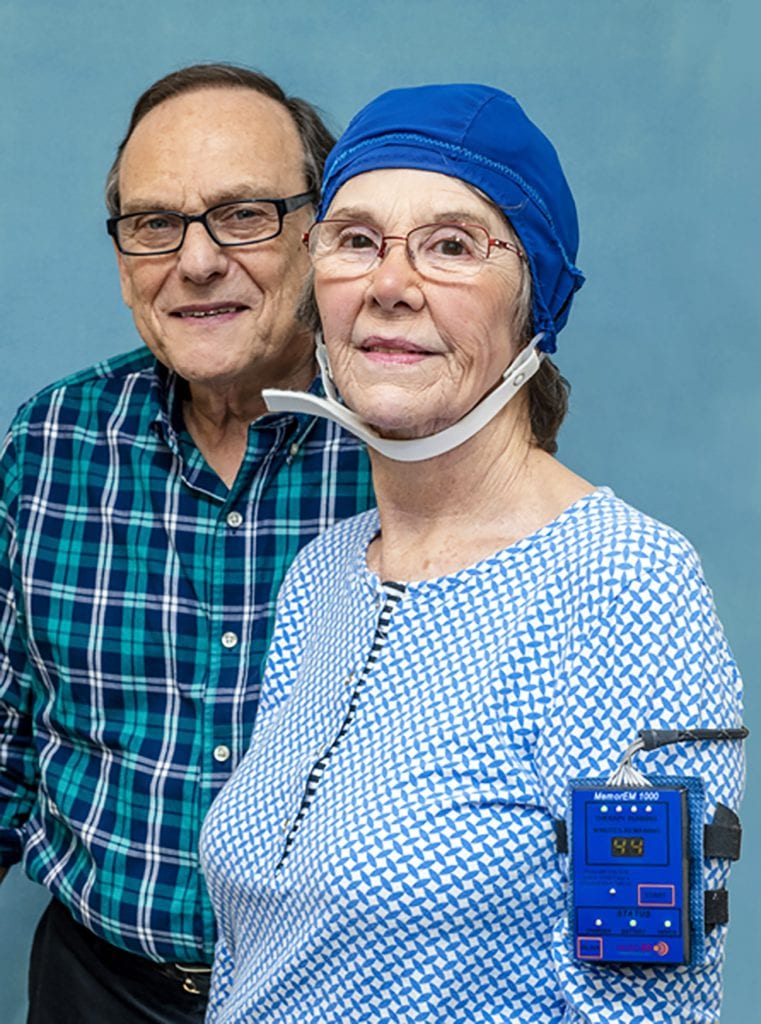 One of the patients of the Transcranial Electromagnetic Treatment (TEMT) which helps Alzheimer’s patients recover memory—with her husband. She is wearing the device.

Escondido-based Left Coast Engineering has developed a wearable device under contract to NeuroEM Therapeutics of Phoenix, Arizona that provides electromagnetic wave treatment to the entire forebrain.

Two months of daily treatment reversed cognitive impairment of Alzheimer’s disease by apparently affecting the disease process itself by eliminating its root cause.

In a study performed at the renowned University of South Florida/Byrd Alzheimer s Institute, after just two months of in-home use, one hour/twice a day, the average memory decline in 88% of patients with mild to moderate AD was reversed back to their better cognitive levels of a year earlier. The study also indicates that, at least for the study s 2-month treatment period, TEMT was safe in all eight participating patients.

Cognitive testing results from the ADAS-cog, the benchmark test in AD research, showed that seven of the eight AD patients responded to TEMT with clinically important and statistically significant improvements in this task. In another well-established task used in AD research called the Rey AVLT, all eight subjects combined showed cognitive improvements that were equally as strong.

Blood and cerebrospinal fluid (CSF) analyzed for AD markers revealed changes consistent with TEMT breaking up small aggregates (oligomers) of two toxic proteins in the brain called A-beta and tau. Both of these are currently thought to be the root causes of AD. In addition, MRI brain scans following the 2-month treatment period revealed evidence of increased communication between neurons in the brain area critical for cognitive integration. One of the study participants proudly says, “I’ve come back!”

At the end of the two-month study, none of the patients wanted to give their MemorEM devices back, resulting in a 4-month extension study with the University of South Florida/Byrd Alzheimer’s Institute happening now with plans forthcoming for a larger study of 150 patients in 2020.

This pioneering study suggests that TEMT may be an entirely new therapeutic intervention against Alzheimer s disease, said NeuroEM Founder and CEO Dr. Gary Arendash. “Our bioengineering technology may be succeeding where drug therapy against this devastating disease has thus far failed. TEMT appears to be affecting the Alzheimer’s disease process through several actions directly inside neurons (brain cells), which is where we believe the disease process needs to be stopped and hopefully reversed,” he said.

The electromagnetic (radiofrequency) wave treatment used by Dr. Arendash in his previous Alzheimer’s mice research are generated in the portable MemorEM device that LCE designed for the human study, explained LCE’s Rob Baranowski. The fields generated by the device are able to penetrate into the brain cells to depths that pharmaceuticals can’t get to. Once inside the brain cells, the radiofrequency waves breaks up toxic protein aggregates, which seems to effectively reverses the disease s cognitive decline.

Based on LCE s key expertise in wireless and custom radio transmitters, NeuroEM engaged the SoCal company in 2014 to start defining a commercially viable implementation of an RF treatment device. After several iterations, LCE developed the wearable MemorEM for NeuroEM, including the head cap, cabling, electronics, and packaging. LCE then produced the units that were delivered to NeuroEM for the clinical trial. Afterwards, LCE has worked with NeuroEM to enhance their patent portfolio with the specifics of what was designed into these devices.

“Hearing the interviews of the trial participants really made me step back,” said Rob Baranowski. “Across the hundreds of products we’ve developed, this is the first time I’ve heard from a user that our product has altered the course of their life. The enthusiasm in their voices…it certainly gives the work that we do here a different perspective.”

Now in its 20th year, Escondido, CA-based Left Coast Engineering (LCE) is a full-service, electronic product design resource. The company supports both new and next-gen product designs from concept to production, including product definition, certification testing, production test, validation/verification and intellectual property protection. Founded in 1999, LCE has steered more than 150 designs from start to finish. Left Coast Engineering is a dba of Park-Tours, Inc. More information can be found at www.LeftCoastEngineering.com

NeuroEM Therapeutics is a clinical stage medical device company focused on development of Transcranial Electromagnetic Treatment (TEMT) to treat neurodegenerative disorders such as Alzheimer’s Disease, Traumatic Brain Injury, and Parkinson s Disease. The company is headquartered in Phoenix, Arizona and has obtained research support from the NIH, the GlassCharitable Foundation, and angel investors. NeuroEM s head device (the MemorEM) is a first-in-class medical device that provides full brain electromagnetic treatment in-home and with near complete mobility.