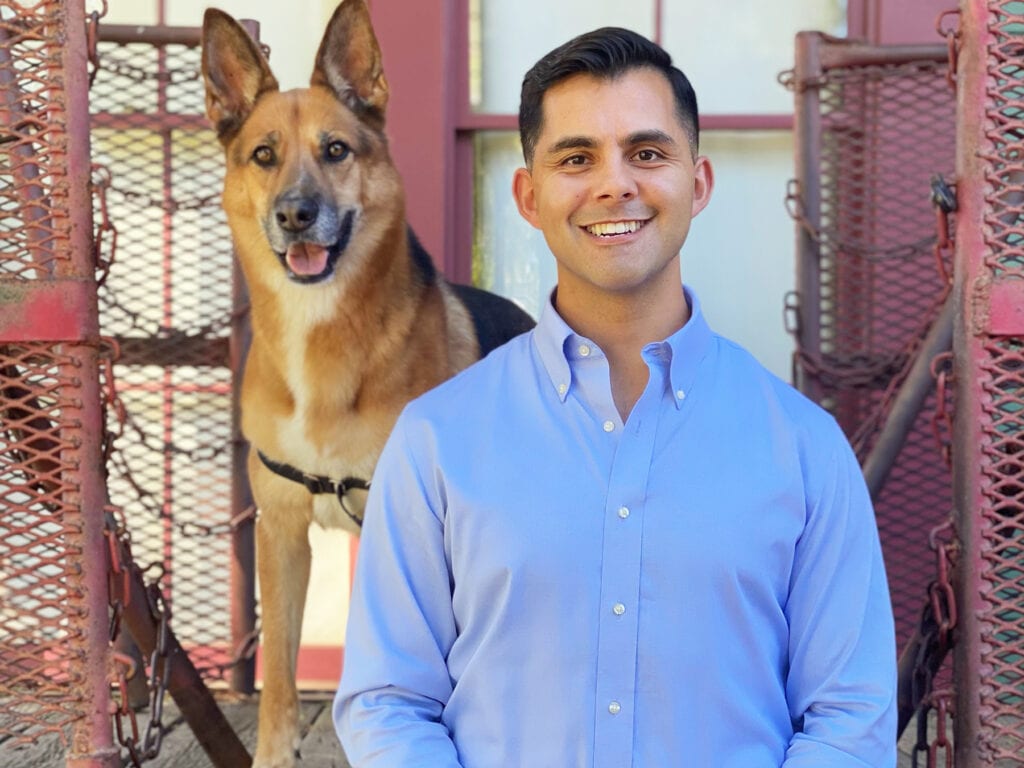 Congressional candidate Joseph Rocha and his dog Daytwa—a Shepherd and Malinois mix. She was a rescue dog from the San Diego Humane Society.

Escondido resident Joseph C. Rocha’s decision to run for office against Congressman Darrell Issa was a very personal thing. “I think for sure the catalyst was the January 6 insurrection,” he told The Times-Advocate.

At that time he was still in uniform as a Marine Corps captain. “I watched Issa vote against the certification of the election,” he said. “We saw the glowing images that looked like the Capitol was literally on fire and yet the congressman voted against the vote certification. Which was an affront to the police and the people in uniform and a betrayal of his oath. Under Trump I saw a Muslim ban, a trans ban, while the First Amendment and freedom of speech and assembly were under attack. I served in two service branches, and as a JAG and prosecutor. I felt called to do more.”

Rocha, 35, has announced that he will challenge the 50th District Congressman in the  2022 election.

Rocha, a Democrat, is a former USMC prosecutor, who in his press statement declared,  “I’m running for all of us who have been left out and left behind by career politicians who only serve themselves.” This is his first try at political office. “I’ve been in uniform literally since I was 18,” he said.

The main issues, he says, “are jobs and infrastructure.”  He adds “Employment is not the same as gainful employment. Voters in the district should not have to have two or three jobs just to pay the bills. They should have a single job that allows them have gainful employment and get home to their families.”

By infrastructure, he said, “I mean finding a solution to our water crises and fixing the power grid, which is a health risk for senior citizens. For me it’s about ensuring there are good schools, better infrastructure and more affordable health care. Really a focus on getting people back on their feet and rebuilding the middle class. Two things Issa has forgotten about.”

Rocha concluded, “I certainly hope my sort of adversity and fighting and never giving up, even circling back later in life with my dad, will serve as inspiration for others to wage their own battles in service of their country, of their communities. I hope it is part of a positive wave across the country.”

“After they unfairly kicked me out because I was gay, I vowed to change that unfair law so I could come back to the military and finish serving my country,” he said. “I did exactly that, and joined the Marine Corps to continue my mission. Now, I’m running for Congress to keep serving my country and to take on anyone and everyone — like Congressman Darrell Issa — who thinks hardworking people don’t deserve a voice.”

The candidate’s grandparents came to the Golden State from Mexico to work in the tomato fields and canneries in the 1960s. According to Rocha’s website: “Through hard work and determination, they climbed into the middle class to build opportunity for their family. Joseph’s mother struggled with addiction, so he spent most of his childhood living with his father, who raised a family of five in Riverside on a truck driver’s salary. But when Joseph came out as gay at 17, he had to move out. Though his early years were marked by hardship, trauma, and housing insecurity, Joseph excelled in school, participated in the Chicano Latino Youth Leadership Conference, and worked part-time as a dishwasher.”

Rocha graduated from San Diego City College, the University of San Diego and the University of San Francisco School of Law. Following the repeal of “Don’t Ask Don’t Tell,” he joined the Marine Corps in 2014 and rose to be a captain and judge advocate, which he did for seven years. He prosecuted cases of sexual assault, child pornography and drug dealing, among others.

Rocha says that what differentiates him from “politicians” “is this is all very personal to me. Because my grandparents were immigrants, I saw their hard work. My father is a truck driver who raised his family off a single source of income. My mother suffered from drug abuse. That compelled me to want to create a system that doesn’t leave people behind.”

He was also spurred to run against Issa, because he voted against the repeal of “Don’t Ask, Don’t Tell.” “I served seven years as a JAG [a member of the Judge Advocate General’s Office] despite that vote. I had to be part of ruling that it was unconstitutional because he didn’t see fit to vote against that,” he said.

The 50th Congressional District is one of the most Republican in the state. Does Rocha intend to appeal to members of the GOP? “As I speak to voters, I can’t tell you how many times they ask me about myself, my service in the Navy and Marines and as former law enforcement,” he said. “Those things mean things to them. Republicans tell me that they don’t feel represented by the current Republican party or by Issa. I think I do have a lot of appeal around party lines because my service has been nonpartisan and to the community.”

Asked if he expects to be helped or hurt by redistricting, Rocha replied, “There’s no way to know how it will work out. My hope is that the commission will draw fair lines and keep communities intact. I’m convinced I can win this race just the way things are now.”

The “big pitch” that Rocha gives people when he meets them starts out: “My campaign is for everyone who has been left behind or forgotten. I’ve fought for everything I’ve had all my life. That’s the spirit I would bring.”

He also loves to talk about his dog, Daytwa, a rescue from the Humane Society, who served with him in the Marines. “We really identify with each other and help each other get through it.” He adds, “For any Republican who is hesitant, my background is just in service, law enforcement, and as an officer. I’m a working class person who will work for the working class. Meet me and my bet is that our value structure is not that far off.”