Escondido’s Haley Moore is a comet that shouldn’t disappear 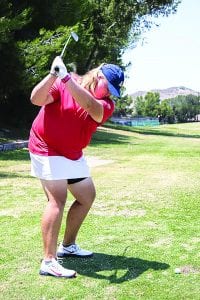 Haley Moore has great mechanics which leads to a repeating swing.
Photos by Lenny Kerbs

To begin with, the set-up and stance look good with her legs forming a solid base. Her takeaway is smooth and the tempo she creates is rhythmic and damn near perfect. Her head is steady and riveted on the ball, barely moving. Moreover, because her swing is sublime in its simplicity, with little that can go wrong, it constantly repeats—which is one of the primary aims of any golfer.

Invariably, when she makes contact, you hear the desired click that is music to ears of any serious player. In addition, whether she’s hitting a wedge or pounding a long iron or driver, a remarkable accuracy is evident as if the ball has a homing device implanted in it and can’t deviate far from its intended target.

Then, when you couple her already dependable but ever improving short game with a power quotient that few other women players possess, well, you’re really onto something.

And make no mistake about it, Haley Moore has been, is and will continue to be something special. Like a streaking comet, the University of Arizona standout has burst upon the collegiate golf scene but unlike the aforementioned celestial body, Moore isn’t likely to flame out or implode. On the contrary, she seems to have staying power written all over her.

To document with any great detail the extensive achievements of this extremely talented 18-year-old would require a lot more space that can be allotted here. But among the innumerable highlights are these: San Diego Section CIF player of the Year in 2014; was one of the top ranked prep golfers in the country coming out of San Pasqual High; made the cut in a major LPGA event in 2015; finished second in the NCAA Championships as a freshman; earlier this year captured the individual title at the prestigious Allstate Sugar Bowl Intercollegiate Championship in New Orleans and finally; is currently rated as the 19th best woman amateur golfer in the entire world. To say the least, that’s some pretty heady stuff.

Moore’s golfing journey began at five years of age when she was exposed to the game while going along with her older brother Tyler whenever he would go to play or hit. She admits that she struggled a bit when she first picked up a club but thanks to plenty of practice, instruction from people like her father Tom and starter golf coaches and an abiding passion for the sport, her skill and aptitude rapidly increased. And though she also showed promise in both soccer and softball, Haley eventually made the commitment to devote her energies solely to golf – an inspired decision as it turns out. “I just really developed this love for golf and wanted to stick with it and concentrate on nothing else,” Haley says. 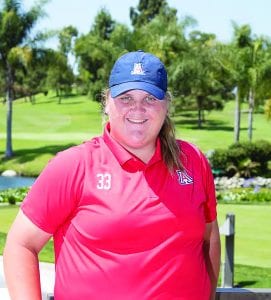 A graduate of San Pasqual High, Moore’s future is as bright as her smile.

By the time she arrived at San Pasqual High, her game was rapidly evolving and dramatically ascending. As the school’s top performer for three varsity seasons, she had certainly found her niche.

Wanting to get her career started at Arizona as soon as possible, Moore accelerated the completion of her studies at SPH by taking online courses. As a result, she was done as a Patriot student a semester ahead of schedule—which jumpstarted a new chapter in her life and took her to Tucson. The U of A had been expressing interest in Haley ever since her sophomore year.

Though getting onboard with the Wildcats was significant, the most momentous thing to happen to Moore in 2015 was when she qualified to play in the LPGA’s ANA Inspiration, one of the circuit’s most acclaimed events. Her performance was impressive, to say the least, as she was the lone amateur to make the cut before finishing in a tie for 67th place.

Moore was also the beneficiary of being able to compete alongside one of the game’s bright talents, Charley Hull, an Englishwomen who has won on both the Ladies European and LGPA tours. Hull was gracious and friendly and because her game is built around power and distance much like Haley’s, the young American was able to glean from her playing partner some valuable tips that she could incorporate into her own approach as well.

Another meaningful moment at that tournament occurred when Christina Kim, a colorful and outgoing player and the winner of five professional titles, gave Haley a congratulatory hug for putting forth such a remarkable effort. “That whole experience was just really cool,” Moore relates, a smile creasing her lips when recalling the memory.

Moore’s first year as a Wildcat was punctuated by a spectacular run at the ultimate collegiate competition, the NCAA Championships. Playing on a course in Eugene, Oregon that comfortably fit her eye, Haley put on a showing (tied for second) that belied her youth and signaled her true emergence as a collegiate heavyweight. “It was a competition where I stayed really patient and everything just seemed to come together,” Haley informs.

Ever improving and solidifying all aspects of her game, Haley’s second season at Arizona sustained her notable forward momentum. As arguably the team’s best player, she led the Wildcats in stroke average (around 70) and rounds under par. At an event in New Mexico, she demonstrated her potential to go really low by firing a sizzling 65. To the best of her recollection, Moore was a top-ten finisher in every match that the Wildcats took part in, with the exception of one.

One of the few things missing from her collegiate resume was a individual victory but Haley checked that off the list this past February when she put together three steady rounds including a 69 on the final 18 holes that helped her capture the highly-regarded ASBIC event in the Crescent City. “That was a long day of golf because we had to get in a couple of rounds,” she explains, “but I played pretty well and most importantly, I didn’t press which I think made the difference.”

With her confidence buoyed by that win, she followed that up by getting herself into serious contention in two subsequent events but couldn’t quite seal the deal. But that stretch of play, with its triumph and near-misses, was instrumental in her overall maturity as a player. “Those experiences of winning and coming close were really important in helping me to grow,” Haley readily acknowledges.

When zooming in and breaking down all aspects of Moore’s game, there doesn’t appear to be any weakness whatsoever. Versatile in the manner in which she can manipulate the ball, Moore can either impart a fade or a draw predicated on what a particular shot may require.

Off the tee, she can launch it, her drives rising high and traveling far down the fairway. Able to consistently send the ball on rides of between 260 to 270 yards, Moore is one of the longest hitters in college and easily outdistances most everyone she competes against. “Without a doubt, my strength is being a long hitter,” Haley says.

She hits her mid-to-long irons square and with enviable accuracy. And because of her prodigious length, she’s afforded plenty of opportunities to go flag hunting with her lower irons and wedges. Though this is an area that she continues to emphasize and hone, the fact remains that her short game is really coming on and shows signs of genuine upside. “I work harder at that part of the game than practically everything else and it’s starting to pay off,” Moore shares. Off or around the greens or in the bunkers, Haley guesstimates that she now gets it up and down about fifty percent of the time.

As for her putting, you can’t have risen to her elite level without knowing plenty about how to wield the flatstick. But when asked about her skill around the greens, she points to a greater proficiency with her short and lag putting as the keys to even better scoring.

Dedicated to practicing hard, Moore has the blue-collar work ethic necessary to become a potential collegiate superstar and one that will serve her well in the pursuit of an eventual professional career. This summer for example, she can be found almost daily at the Country Club of Rancho Bernardo, where she’s a member. Her regular regimen generally starts with about an hour-and-a-half to two hours of practice, then testing her merits on the course where she’ll play at least nine holes before returning to either the range, a chipping area or a putting green, if not all three. “I’ll put in the time because it’s so important that I keep everything sharp,” she states.

Having comfortably adapted to the lifestyle in Tucson where she lives in a small house near the campus, Moore is relishing in the college experience and all that it has to offer. “I’ve learned at lot because of school,” she indicates. “I’m getting a great education and being there has really helped me mature as a person. I just love the atmosphere.”

And making it even more special have been the bonds she’s been able to cultivate in the Arizona high desert with people such as her two coaches Laura Ianello and Derek Radley, who have not only elevated her golf game with their expertise and encouragement but also have provided sage counsel and support in other areas outside of golf. Her good friend and fellow team member Gigi Stoll has also been there for Moore and has helped inspire Haley to more readily reveal her likeable, kind and pleasing personality.

As for the future, Moore’s immediate plans call for her to be a participant/contender in this year’s upcoming U.S. Women’s Amateur Championship to be contested at the San Diego Country Club in early August. Moore, who will be making her third appearance in the Amateur, is stoked about having the chance to play such a high-profile event on a local track before lots of family and friends.

After that, it’s Haley’s intent to stay on at Arizona through her senior year and then make a strong and concerted push to make it out on the tour, either through Q-School or earning her way to the big show through the Symetra Tour. Based on past results, her myriad of bona fide skills and an unwavering inner resolve, you’d be a fool to think that she won’t turn that dream into a living reality sometime soon.

Yes indeed, Haley’s like a comet in that she shines ever so brightly and gives off a terrific light. But there doesn’t figure to be any disappearance act when it comes to this local product. On the contrary, Moore seems preordained to be a comet that will be seen in the golfing galaxy for quite some time, most likely in dramatic fashion.