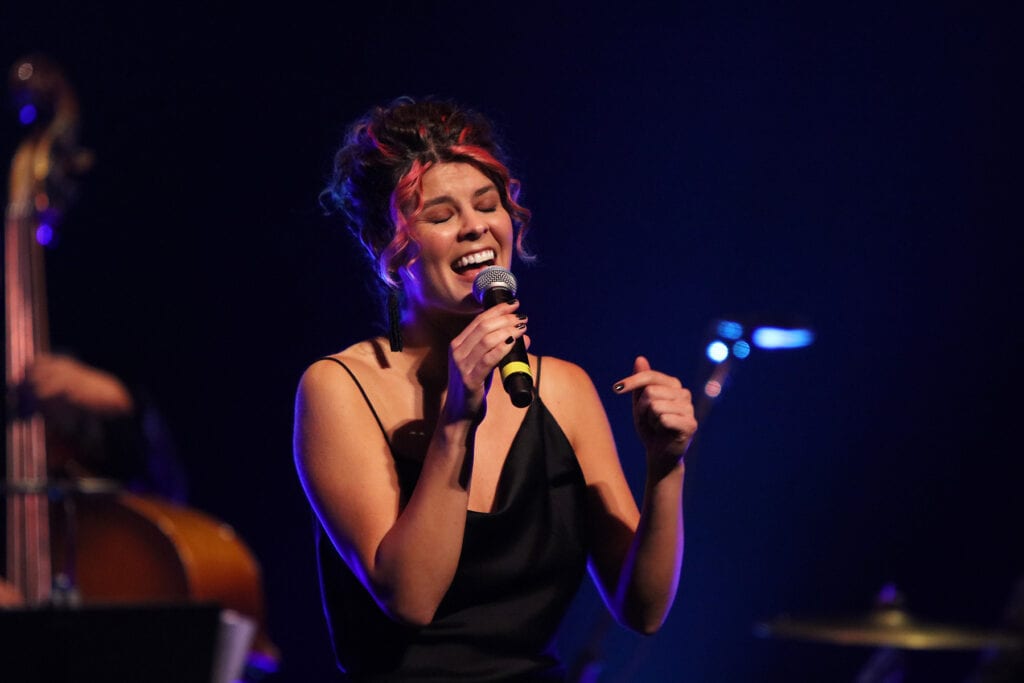 Escondido’s Gabrielle Cavassa was one of two recipients of the Sarah Vaughan International Vocal Competition. Photo by Anthony Alvarez

For the first time in its nine-year history, the Sarah Vaughan International Vocal Competition (Sassy Awards) named two winners of its annual contest: 26-year-old Gabrielle Cavassa, who grew up in Escondido, and 25-year-old Tawanda Seussbrich-Joaquim of Los Angeles. The finals for the 2020 competition, originally scheduled for November 2020, were postponed by the pandemic and held on June 6, 2021, at the New Jersey Performing Arts Center.

At April’s socially-distanced Exit Zero Jazz Festival in Cape May, New Jersey, Gabrielle Cavassa ignited the crowd gathered near the Cape May Ferry when she invited her friend, vocalist Cyrille Aimee (and former Sassy Award winner) to the stage to join her in a duet of Frank Loesser’s “I’ve Never Been in Love Before.”

That song had special meaning. Cavassa was a finalist in the 2018 Sassy competition, and that was one of the songs she sang. She almost didn’t repeat it in the 2020 contest, but, “it’s kind of a tradition with me. I end with that song on gigs a lot. Maybe I just wanted something that I know like the back of my hand, something that felt really comfortable.”

Cavassa considers herself “a romantic. I think I’m changing,” she said, “but one of my favorite things about standards is that the concept about romance is so different than what we talk about today.” That’s the reason she loves the Billy Eckstine song, “I Want to Talk About You,” which is on her self-titled first album, released last year by 711330Records DK2. “Maybe someday I’ll grow into the independent woman,” she added, “but right now I’m so romantic and vulnerable in my emotions, and I feel the world isn’t. There are so many things that I sing that I don’t think I’m allowed to say.”

Growing up in Escondido, Cavassa heard “a lot of Frank Sinatra because my grandpa is Italian, and he just loved Frank Sinatra. At a certain point, I became obsessed with my parents’ Christmas album because it had jazz on it. One of the songs was Nancy Wilson singing ‘The Things We Did Last Summer.’ There was also an Ella song on it.”

Cavassa moved to the San Francisco area to attend college at San Francisco State, and that’s when, “I really got into jazz. I didn’t like studying voice, but I got into jazz history.” She started going to live jazz performances and collecting records. “I bought a lot of records and would learn things off the records. And, I would sit in at a club called the Club Deluxe. I learned through trial and error.”

On a vacation trip to New Orleans, Cavassa was “so amazed by the concentration of music, coming from everywhere, and, in 2017, she moved there, quickly acclimating herself to the local music scene. She toured with Adonis Rose and the New Orleans Jazz Orchestra and trumpeter Irvin Mayfield and met drummer/singer Jamison Ross, who co-produced her album. She also met legendary New Orleans vocalist, 80-year-old Germaine Bazzle, “who had an amazing influence on me.”  Bazzle’s song, “To You My Love,” is included on the album as a tribute to her.

Cavassa is collaborating with keyboardist Ryan Hanseler on another album, with strings. There will be some original music and at least one standard, Cole Porter’s “So in Love.” The album, she said, “is a product of COVID. We were neighbors and quarantined.”

The Sassy Awards will return to their normal November date later this year, so Cavassa will be coming to New Jersey to present them as one of the most recent winners. And, she’s hoping to book some dates in the Northeast. Gary Walker, morning host of WBGO, the Newark-based jazz radio station, was one of the Sassy judges. He considers Cavassa, “a producer’s dream. She has a truly original approach to the music, which is quite refreshing and much needed.”