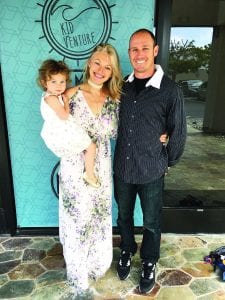 Cory David Iverson and his wife and daughter.

Firefighters and hundreds of others lined I-15 Sunday to welcome home the body of Cory David Iverson, 32, of Escondido, who succumbed Thursday in the line of duty battling the Thomas Fire in Ventura County, near Fillmore.

Iverson, a Cal Fire, fire apparatus engineer, had been with the service since 2009.

He is survived by his wife, Ashley who is pregnant with their second child, a 2-year old daughter, Evie, parents and family.

Iverson died while fighting the fourth largest wildfire in California history. He was part of a strike team consisting of several other firefighters working the eastern side of the fire, which had at that point reaches 390 square miles in area or about 250,000 acres.  As an engineer, Iverson was in charge of driving a fire engine and leading its crew.

He succumbed to heat injuries and smoke inhalation, according to an autopsy performed by the Ventura County Medical Examiner’s Office.

No other firefighters with him were injured.

California Governor Jerry Brown issued the following statement: “Anne and I are saddened by Engineer Cory Iverson’s tragic death. His bravery and years of committed service to the people of California will never be forgotten.”

The firefighter’s death was the first firefighter death in this most recent series of wildfires in Southern California. The fire has also destroyed nearly 1,000 structures, many of them homes.

A memorial for Iverson will be held at the Rock Church in Point Loma at 10 a.m. on Saturday, December 23.