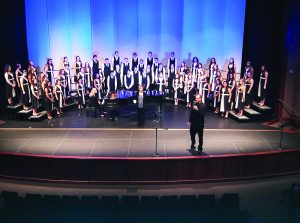 Escondido Classical Academy Choir will be among those providing entertainment at the 8th annual San Diego Women’s Week.

The eighth annual San Diego Women’s Week, designed to empower, inspire, and connect women, with a focus on diversity and inclusion, will run March 20-24 with a long list of inspirational speakers and special events. Organized by North San Diego Business Chamber, the event offers practical advice from successful leaders across multiple industries.

Speakers for 2017 include: Academy Award Winner Marlee Matlin; Sally Krawcheck, one of the highest ranked women ever to have worked on Wall Street; Shiza Shahid, who introduced Malala Yousafzai to the world and spent the past year as the driving force behind The Malala Fund; Elliot Kotek, Co-founder of Not Impossible; Kim Coles, actress, comedian, and author; and Olympians Kaitlin Sandeno and Scout Bassett.

Academy Award Winner Marlee Matlin will be one of the keynote speakers at the 2017 San Diego Women’s Week.

The week promises a series of powerful presentations, panel sessions, and interactive discussions that will empower women to be impact-driven leaders with a focus on tolerance, diversity and inclusion.

For the first time, Opening Day of San Diego Women’s Week, March 20, is open to all attendees free with pre-registration.  Opening day will be held at the Del Mar Fairgrounds and parking will be free as well. The day will consist of keynote speakers, professional headshots, makeovers, resume reviews, exhibitors, and self-defense presentations for women

A new event for 2017 will be the “Dare to Dream” evening, hosted at Sony Electronics on March 22. The evening will feature Mariel Hemingway as a keynote, along with tastings from local wineries, breweries, and restaurants.  Other keynotes will include include Wendy Crowley and Esther Friedman, SVPs that co-run the Film and Television Division of Sony ATV/Music Publishing in Los Angeles, and Captain Corrie Mayes, Blue Angel #8.

The 2017 Title Partner is Sharp Rees-Stealy and Sharp Health Plan, and venues for this year will include the Del Mar Fairgrounds, Sony Electronics Headquarters, the new Sharp Rees-Stealy in Rancho Bernardo and Harrah’s So-Cal Resort.

Entertainment throughout the week will include Alicia Gwynn (widow of former San Diego Padre Tony Gwynn), Beverly Baker, and The Classical Academy Choir. Gwynn has just completed her new album, “Journey,” with all music focusing on women’s empowerment.

See www.sdwomensweek.com for a complete list of speakers and schedule of events for the week.