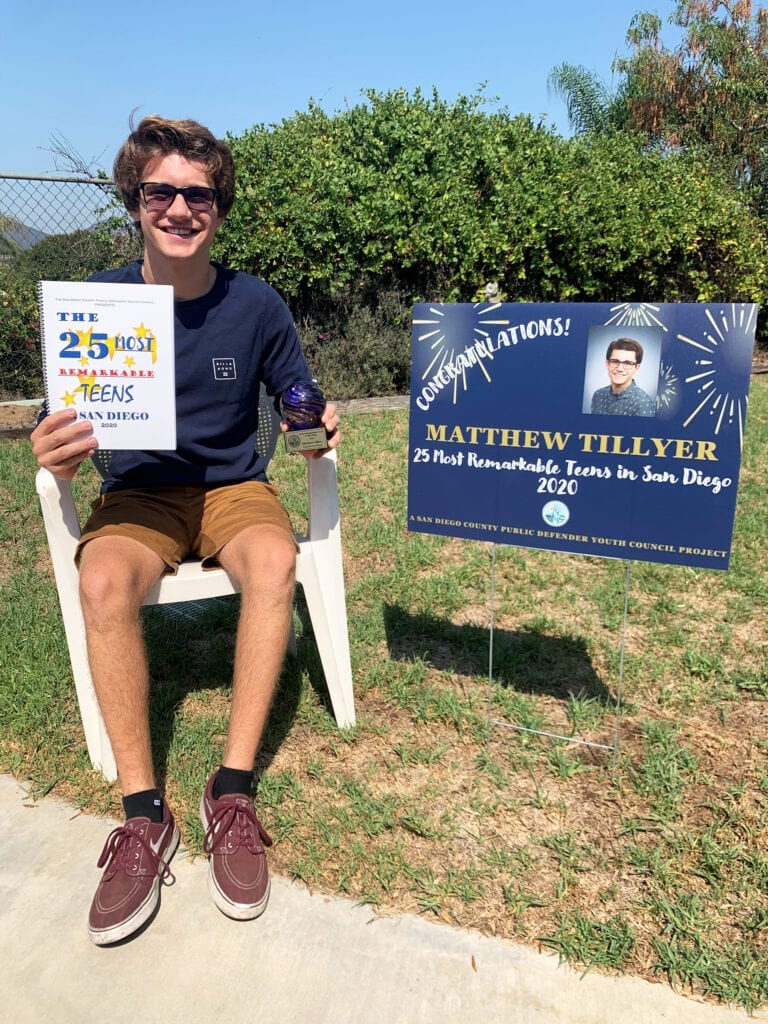 Despite the pandemic’s interruption to schools this spring, the San Diego County Public Defender’s Office sought to recognize 25 students who excelled in a broad field of endeavors, including community, public safety and active citizenship.

One of them was Escondido’s Matthew Tillyer, a recent graduate of the Classical Academy High School. He won in the category of “Personal Determination.”

“It was difficult choosing only 25 from all the amazing kids we interviewed, but it was also inspiring to hear their stories,” Public Defender Randy Mize said. “Gen Z teens are involved, informed and globally connected.  These kids are ready to fight fiercely for change in a world that is desperate for change. I can’t wait to see what they do.”

The Most Remarkable Teen program recognizes San Diego youth ages 13-19 for their contributions and efforts in 25 non-traditional categories including arts and culture, technology, civic involvement, leadership, courage to overcome adversity and other outstanding accomplishments, successes, and efforts.

The San Diego County Public Defender Youth Council, made up of high school students, and Mize interviewed nominees using videoconferencing and selected the 25 teens from 150 students nominated. The public defender said last year’s inaugural program was a success and they were thrilled to receive so many nominations since schools closed shortly after the nomination period opened.

Due to COVID-19, the Public Defender Attorney Advisors delivered Remarkable Teen award packets, including a crystal glass trophy, personalized yard sign and special commendations, to each recipient’s home this week.

The teens received a Certificate of Recognition from the Public Defender for the honor of being nominated. The teens also received personal commendations from San Diego County Board Chairman Greg Cox and Supervisor Nathan Fletcher and San Diego City Council President Pro Tem Barbara Bry, Councilmembers Monica Montgomery, Chris Ward and, who had previously committed to presenting the 2020 awards at the live event.

Matthew Tillyer, a recent graduate of Classical Academy High School, did not let his physical challenges determine his ability to serve and connect, and that positively impacted his high school and community. He became physically disabled six years ago following a severe respiratory infection that attacked his nervous system. After experimental medication and months of physical therapy, Matthew was able to attend high school in a wheelchair.

Matthew always loved football, and filmed varsity practices and games. Matthew became a member of the Fellowship of Christian Athletes on campus, serving as president in his senior year. He also served as an editor of the school video news program as well as commissioner of Link Crew – a student mentorship program. Matthew will be attending UCSD in the fall and plans to major in international studies-history.