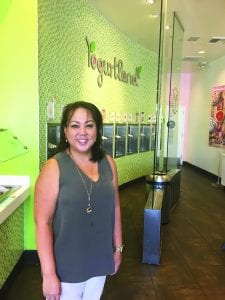 Escondido Yogurtland owner Mona Takeda, who threw out the first ball at Sunday’s Padres game against the Los Angeles Dodgers.

Mona Takeda of Escondido, owner of the Escondido Yogurtland got to cross one off her “bucket list” Sunday when she threw out the first pitch at Padres/Dodgers game.

Mona Takeda, a Hawaii native, joined the Yogurtland family in 2014 when she bought her first store in Escondido. Just at the start of her journey through entrepreneurship, Mona received news that she had ovarian cancer. Today, she is cancer free and eternally grateful for all that Yogurtland has brought to her life, including the opportunity to throw the first pitch at the San Diego Padres game on July 2, 2017 against the Los Angeles Dodgers.

For Takeda, this once in a lifetime opportunity gives her the chance to check off one of her bucket list items, something Mona cherishes far more as a cancer survivor.

Takeda is in the final stages of acquiring her second store in her home state of Hawaii, another bucket list item of hers.

“We are thrilled that we could offer Mona the chance to cross off one of her bucket list items,” said Jeff Sweetman, executive vice president, operations at Yogurtland. “Mona embodies all of our core values and we are lucky to have her as part of the Yogurtland family.”