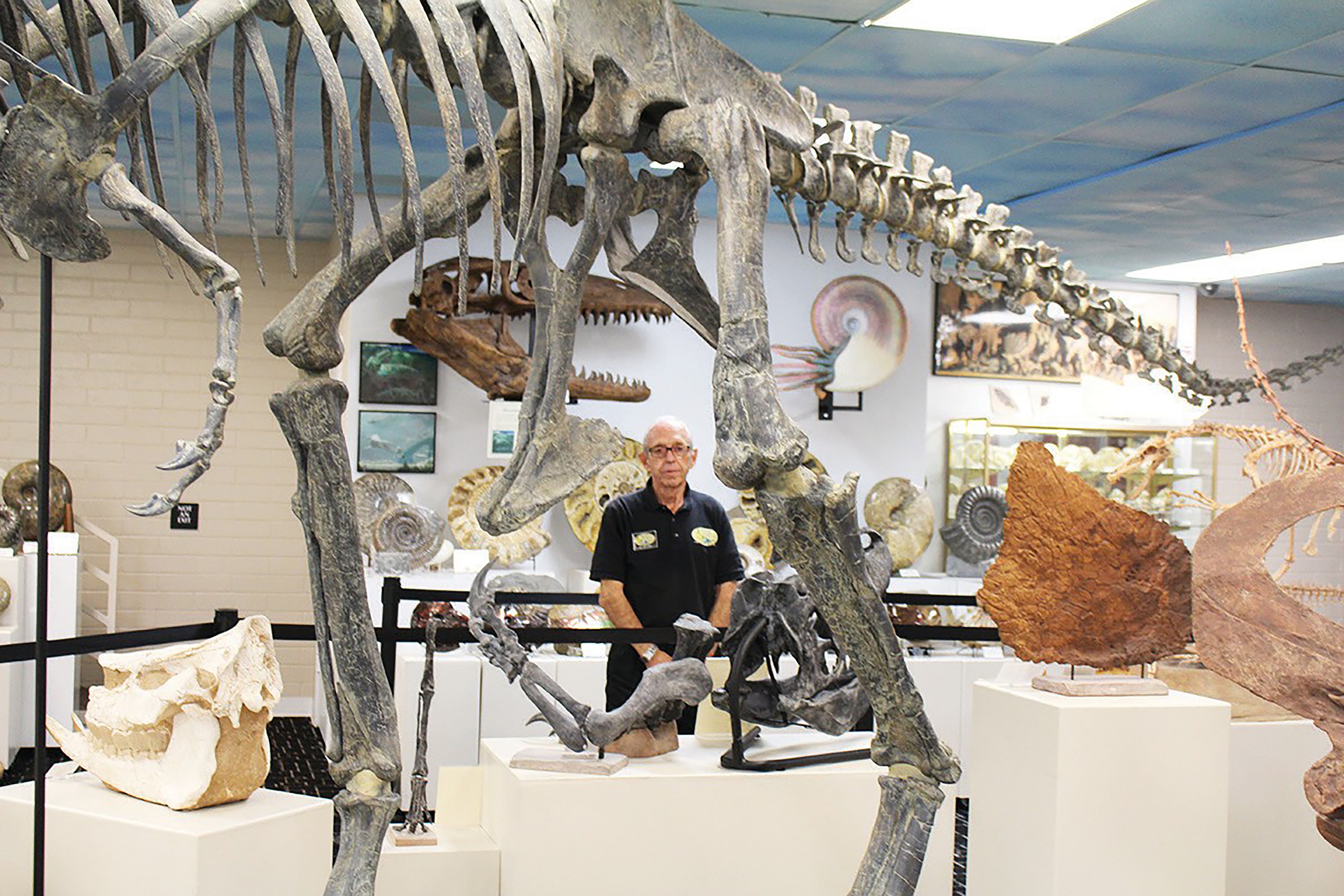 Keith Roynon framed by the fossilized remains of one of the giants of dinosaur age.

If there’s anything little children of all ages love, it’s dinosaurs. So it’s a pretty sure bet that there are going to be a lot of sad children in Escondido with the announced closing of the Roynon Museum of Earth Science & Paleontology on Grand Avenue. The last chance to see this remarkable collection will be June 29.

The museum opened about four years ago after Keith Roynon, who had built up his collection of fossils for seven decades—beginning when he was a little boy— and ran an unofficial museum out of his home, was able to get the funding to move to an actual museum location in the center of town.

It wasn’t long before the Roynon Museum was getting a LOT of attention. Founder Keith Roynon was given a special award by the Escondido City Council. It was also at the top of San Diego’s “A-list” two times in a row, for best museum in San Diego County, including 2016 and 2917.

But the museum WAS Keith Roynon, who taught classes, and curated the fossils, and did everything that a museum director does. However, Roynon is 81 years old, and according to Sherry Bauer, director of education & special events, he wants to retire and there simply isn’t anyone to replace him.

“The number of our volunteers is way down, and, although you probably hadn’t noticed it, we hadn’t been open as often as before,” Bauer said. “We just have a couple of high school volunteers left.  We just don’t know how to make it work. If we have to hire someone to teach classes we’d need $50,000 to keep it afloat without Mr. Roynon.”

The foundation has paid up the rent on the space until the end of July.

Escondido Mayor Paul McNamara told The Times-Advocate, “Words cannot express the sorrow felt when one witnesses the end of an era.  The Roynon museum’s impact to countless children over the years is unmeasurable.  We were fortunate to have it located in Escondido.  While saddened at this loss, we wish the Roynon family the very  best in the future.”

Since earth science and paleontology chronicles the various eons and ages of the earth, going back 4.6 billion years, it is not surprising that when the Roynon museum decided to shut its gates, that it phrased that passing in the language of that discipline.  The museum issued this statement Wednesday morning:

Geologists divide Earth’s long history into a series of time zones, from the origin of the planet, about 4.6 billion years ago, right up to the present day. The major divisions are called eras. Dinosaurs lived in the Mesozoic Era, which is divided into the Triassic, Jurassic and Cretaceous Periods.

But there is a very special Era which many of you were able to witness. That was the Roynon Era. It did not cover nearly as much time as the others but it was remarkable just the same.

It saddens many of us to announce that the Roynon Museum of Earth Science and Paleontology will be closing its doors on June 30, 2019 for the last time.

Mr. Keith Roynon has spent over 75 years building his collection. For the last twenty-five years or more, the main goal was to improve the quality and variety, that would best meet the needs of educating young children throughout San Diego County. It would be difficult to estimate how many children have walked through the museum’s doors and it has been exciting as some of those same children have now brought their own children to see the wonders, and yes, to meet Mr. Roynon. Mr. Roynon IS this museum. His stories, his way of exciting the children, along with his dedication and enthusiasm, are loved by everyone.

Mr. Roynon has been working four or five days a week since we opened the current location. We have all encouraged him to retire and enjoy life. He and his wife still have a lot of living to do and we would love to see them having more time to do the things they enjoy. The fact is, this museum has been the joy of Mr. Roynon’s life, second only to his wife Judy. This has been a very difficult decision and more than a few tears have been shed. But as they say, it is best to go out on top and we all feel that is where the museum is right now.

So, what happens next? Specimens owned by the Museum’s Educational Foundation will be donated to another qualifying museum. Items belonging to Mr. and Mrs. Roynon will be put up for sale, donated or gifted. When asked, Mr. Roynon has stated, “It’s not about the money, it’s about getting these items where others can see and appreciate them, and hopefully learn something new or be inspired to delve into the field of paleontology or geology.”

And what about all of you? We could never thank you enough for the encouragement and support you have shown through the years. We hope you will all stop by for a final visit. If you see something you like, make an offer. Shop in the gift shop as we will begin discounting items to prepare for closeout. And, sign our memory book, to let Mr. Roynon know what the museum has meant to you over the years. Please be sure to check the website for days we are closed since it is very flexible depending on volunteers available. We’re going to miss all of you very much.