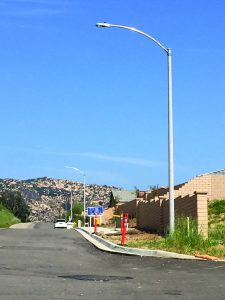 The city has already installed some LEDS in Escondido, including this one on South Escondido Boulevard. The light pole and cobra head look the same as standard concrete street light pole; however, they provide a “whiter” light that improves color rendition. Photo courtesy of the city of Escondido

Residents of the neighborhoods “The Elms,” “Rustic Village,” “Rose to Foxdale,” “Mission Grove” and “Cedar Grove” can expect to see a total of 44 new street lights installed this fall.

This project will add new streetlights to meet current lighting standards and retrofit existing streetlights with LED fixtures at the five established communities. The project plans and specifications are currently at 85% design, and working toward 100% for final review and approval by City Engineer Julie Procopio.

City staff anticipate making corrections to the project plans and specifications and obtain City Engineer approval in time to advertise for bids by April. The Times-Advocate asked Procopio how long after that it would take for the lights to be installed.

“The light standards typically require three to four months of lead time, depending on the manufacturer.  So, adding a few months for bid and award of the contract, we expect that the lights would be installed this fall,” said Procopio.

Besides the installation of the 44 new lights, the  Neighborhood Street Light Project will replace 22 existing Low and High Pressure Sodium luminaires in these areas with LED luminaires.  LEDs, or light-emitting diodes, have many advantages including lower energy consumption, longer lifetime, and better directional control of light.

One response to “Escondido to install new LED streetlights”