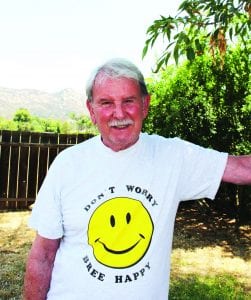 Darwin Bree in the back yard of his Escondido home.

When former students of a certain age in Escondido—i.e. who graduated in the last thirty or forty years—are asked who was the most memorable teacher they ever had, often they will say, “Mister Bree.”

They are talking about Darwin Bree, a teacher who has devoted most of his 81 years to education. He has been a teacher and substitute teacher in Escondido’s high school district for 50 years—all of that at Orange Glen High School, and is beloved for and by the many lives he has touched over the decades.

Besides his devotion to high school students, he is also a devoted volunteer at the California Center for the Arts, Escondido, something he has done for a dozen years. He’s an enthusiastic ambassador for the Center. “Every community needs an art heart,” he says. “I really believe in the place. I love the arts center.

Born and raised in Bisbee, Arizona, Bree attended high school there and went to Northern Arizona University in Flagstaff, where he obtained an MA in biology and math in 1965. He was married soon after and his wife was offered a job at Orange Glen High School in Escondido while he was offered one at Poway High School, so they packed up and moved to Escondido—where he has been ever since.

One of his prized possessions is an award he received from the Hidden Valley Escondido Kiwanis Club in 1968 for his work as the advisor of the OGHS Key Club “For his leadership and inspiration in the Orange Glen Key Club and especially the Community Narcotics Conference” which was held in Sylmar in the same year the federal government announced the “War on Drugs.”  The Key Club had submitted an anti-drug project for which it won an award.

Interacting with teens to warn them away from drugs has always been a specialty with Bree, who, even though he is entering his ninth decade, has the ability to achieve a unique rapport with this age group.

Around the time of the Kiwanis award, Bree won a National Defense Education Act scholarship to Indiana University at Bloomington that for two years exposed him to the world of adolescent psychology and earned him a degree in that field. “The two years at the university changed my life,” he says.

He started his career at Orange Glen HS in counseling and teaching educationally handicapped kids. He used that as an entree to leave counseling and to create the first psychology classes at OGHS. “I like to stir things up and create things. I have always been on the rim,” he says. “Sometime that gets me into trouble.”

Students who took the course remember that he put couches in the classroom and carpets on the floor to create a relaxed atmosphere. He had “great attendance,” as he recalls. “That was the most successful class I ever had.” One class blossomed into six sessions. Then the administration decided that six psychology classes was too many and cut the number to three.

Then he started a sociology class “and that was the most successful class that I ever had. So now I had a lot of the students for two years.”

Buoyed by that success, Bree decided that, based on his own experience as a counselor, that there was a need based on the high ratio of students for each counselor. So, he proposed to the school administration a peer counseling program that eventually became a model for the county, the state and the nation.

His training at Indian University had been in client-centered counseling and that informed his training of his students to be good listeners and then take what they had learned to the right people, rather than try to solve problems themselves. The idea of the peer counselors was “building a community within a community.” “Once I trained them I turned them loose,” he recalls.

The purpose of a peer counselor is to help other students with personal problems or situational stress and to provide some mentoring.

Word began to get around about his program. Professors at universities became interested and inquired about it and the program began being cited in master work and to be mentioned at health conferences.  It became a seed for similar programs in other school districts and even in other states. “People began to realize that kids could be a real force in helping kids,” he recalls.

A school in Long Island contacted them and invited the peer counselors out to New York to spend a week at their school, and later students from that school came out to Escondido to see the program in action. The peer counselors at Orange Glen HS became nationally famous and the program was copied in schools around San Diego county.

Bree trained 20 peer counselors semester, and since the program lasted for a dozen year he eventually trained an estimated 400 peer counselors. Many times over the years he has run into his former peer counselors and often learned that they gone on to open women’s crisis centers, or detox centers or other counseling related programs.

Using his tennis experience at Arizona University, where he had been a station champion, Bree also spent 11 years as a tennis coach, and for five of those years his tennis team went to the CIF playoffs. He also coached wrestling, girls’ basketball and girls’ volleyball.

“I really enjoyed coaching,” he recalls.

Several times Bree also organized trips to Europe and the Soviet Union (that’s what Russia was called before the end of the Cold War.) He also organized Mediterranean cruises for high students and took his peer counselors to New York City several times.

Bree has always been devoted to turning kids away from drug abuse, and when he was a regular staff member at Orange Glen he acquired a reputation as the “drug buster.”

“I busted about two hundred kids for drugs,” he recalls. “The kids would get really mad. But every one would come back eventually and say, ‘Thank you! You’re the only one who did something.’ ”

He adds, “My specialty has always been kids in crisis. That’s who I live for.”

He speaks what he describes as “Street Spanish,” and says, “I have fun with the kids. They are not afraid of me and they never know what I’m going to do next.”

Once a group of students noticed him approach and asked: “Do you dab?”

Dabbing is a form of dance where you push your face into the crook of your arm to indicate joy or triumph.

“Yes, I dab,” said Bree, who then assumed a dab dancing pose, much to their delight. Dabbing has been around for years, he says. “John Travolta in ‘Saturday Night Fever’ was dabbing.”

Over the years Bree has been twice named in the high school yearbook as “most inspirational teacher.” Once or twice students have gone onto Wikipedia and named him as the school’s mascot.

Eventually the program came to an end at OGHS and Darwin Bree briefly left teaching in 1998. But he couldn’t stay away. He went back to be a substitute teacher and has been substituting ever since. He averages about 18 days a month substitute teaching, he says, in spite of just turning 81.

Obviously being in his 50th year as a teacher at Orange Glen, even if it’s not as a regular member of the staff, is a milestone, but Darwin Bree is quiet about this achievement.  And he has no intention of stopping.