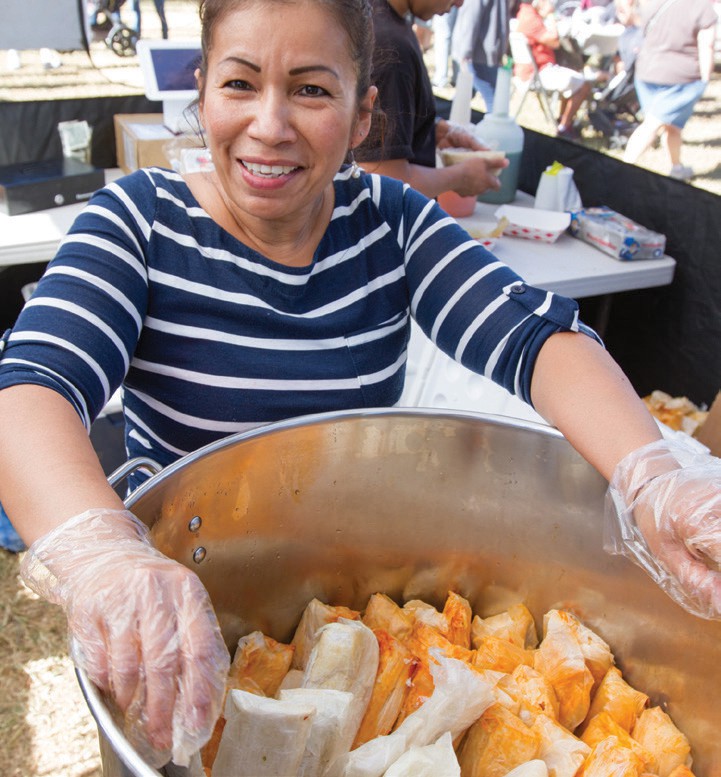 One of the tamale vendors from last year.

November 5, 11 a.m. – 5 p.m. This free event is being sponsored by the Downtown Business Association.

According to Alex MacLachlan, the president and CEO of the DBA as well as the top enchilada of the Tamale Festival, some recent news could rocket the festival into the stratosphere as far as getting publicity is concerned (he means besides having his festival published in the Times- Advocate.)

“Cricket Wireless and Creative Artists Agency are working together to promote a TV series Lucia Underground, which is on the El Rey Network,” he told The Times-Advocate. “They will be bringing Lucia Libre Mexican Style wrestling to Grape Day Park and the Tamale Festival.”

Besides two one hour wrestling shows the festival will include its full slate of traditional Mexican dancing and mariachis on the Main Stage. Title sponsor is Northgate Gonzalez Markets, which will conduct tamale making classes throughout the day.

“The 2nd annual Escondido Tamale Festival is a celebration of Tamales and all the great Latin foods that have become iconic staples of California’s culture,” said MacLaclan. Last year’s event far exceeded expectations for attendance, and they ran out of tamales. Don’t expect that to happen this year. Thirty-five food vendors have been signed up.

The purpose of the festival, he said, is “to celebrate culture and diversity of Escondido and what Latino culture has brought to Southern California. We thought it was a perfect event for Escondido.”

Part of the fun for the second year is chihuahua costume contest and fashion show. Is it possible to see the dogs dressed up in scary costumes even though Halloween will be officially over? “It’s the Day of the Dead period so you never know what those little guys will come dressed as,” replied MacLachlan.

He’s optimistic about reaching the 10,000 attendance figure. “We’re still waiting on city permits for the Lucia Libre event. Then we will have the marketing muscle to attract people from all over the country. There will be a lot of high quality marketing,” (he means in addition to appearing in the Times-Advocate.)

To make sure there is enough food there will be several more vendors than last time and each will be asked to bring 2,000 tamales.

There will be free admission, great food, craft beer and wine to purchase, entertainment, competitions (including the chihuahua costume contest and fashion show) and celebrity chefs.

It is also a look back at the history of the Spanish and Mexican settlers who built the framework for this state.